How to install Android on Raspberry Pi 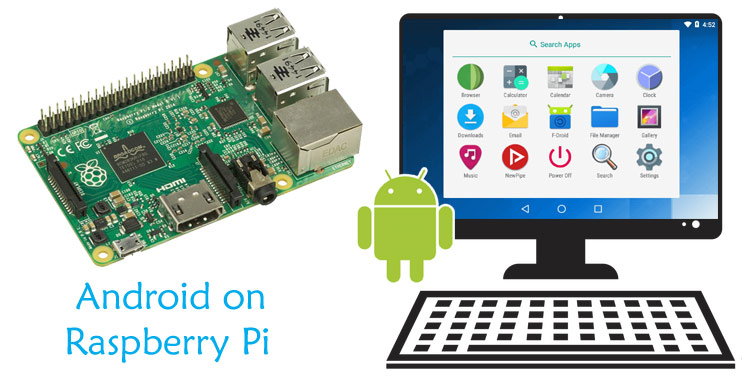 Today we will convert the Raspberry Pi in an Android device using a popular platform - emteria.OS.

Emteria.OS is a full build of Android for Raspberry Pi. It’s Free to use during the initial setup with some limitations, but if you want to use it for the industrial purpose, you’ll have to activate your device with a licensed version. Choosing a free version will allow you to continue with emteria.OS and use it for free. There are some limitations like it will reboot after every eight hours, and has a watermark in the corner. For the testing purpose, it is good, but if you want to use it on the industrial level, you have to buy a licensed version of it.

Emteria OS is based on RTAndroid, and this version is more suitable for business uses. Emteria is planning for personal-use versions in the near future.

Here is the step-by-step guide for installing Emteria OS:

Now on emteria website click on ‘downloads’ and download the emerita OS installer for windows and then install the installer. This installer will flash the SD image file of emteria.OS onto an SD card. 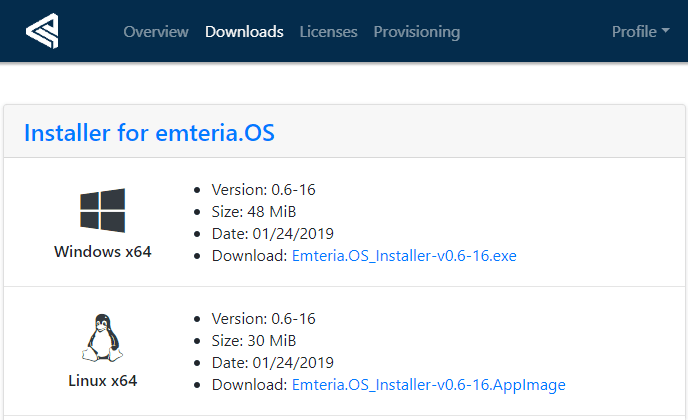 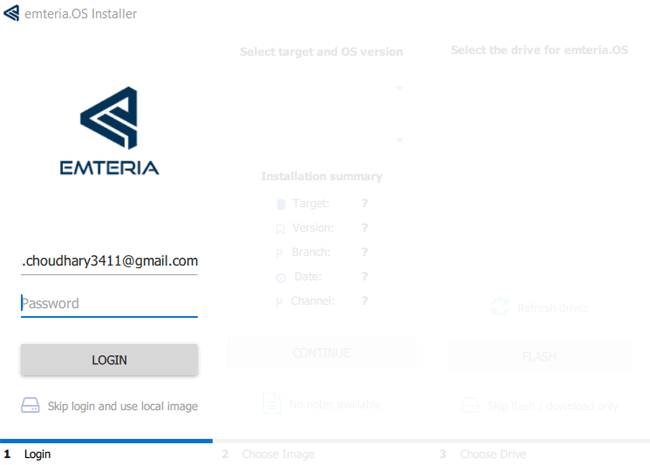 Now in the next window, select the Raspberry Pi 3 as your device for installing the OS. Next,  select your SD card as the installation location and then wait till the installer download the image file of emteria Os and then flash the image to your microSD card. 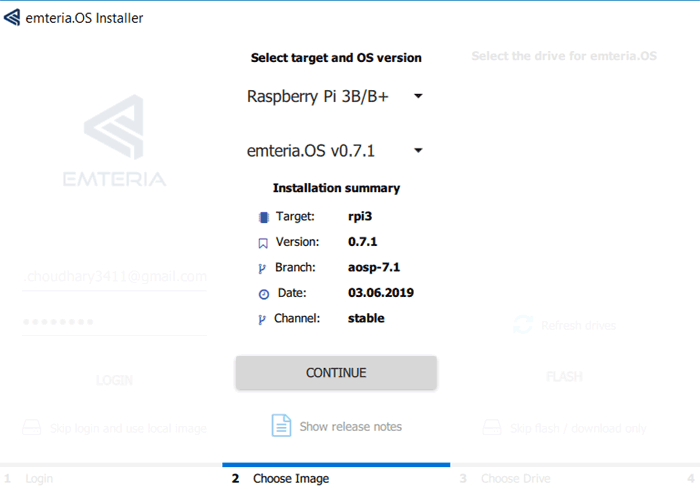 Wait till the process completes, after that close the Installer and safely remove the microSD card. Then insert the SD card in your powered-off Raspberry Pi 3. Connect a display, keyboard, mouse, and then power it up.

Now Android will boot. This will take some time. After this, you should see the following screen. Click on next in the bottom right corner. 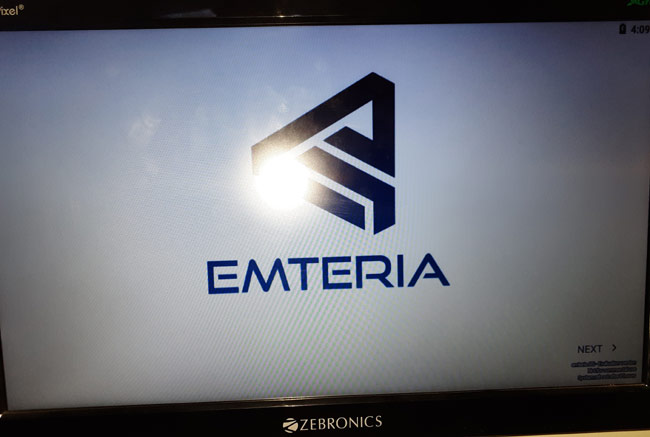 In upcoming windows, select the Language, Time-Zone and set the Wi-Fi network.

After that, the home screen of Emteria OS should start as shown below 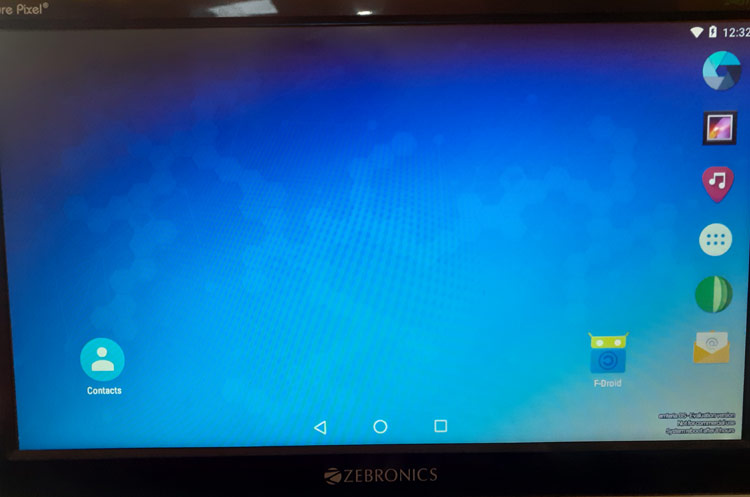 Now the Android operating system is installed on Raspberry Pi.

From home screen open the F-Droid app. It works similarly to the play store. Like the Play Store, there are different categories for different apps. You can also search for apps that you want to install.

Select the app you want to install, then click on the install button.

Some Android app that isn’t on F-Droid can be installed using the APK file. For example, if you want to install Netflix, download the apk using the emteria OS browser.

After downloading the APK, install it. Now you are ready to use Netflix on your Raspberry Pi. 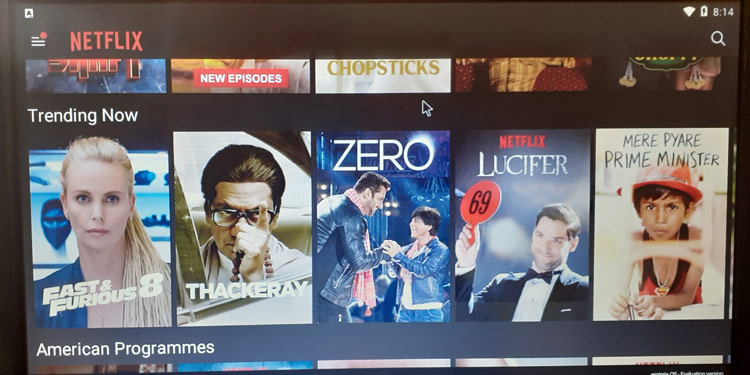 Using emteria OS, you can easily install the Android-based operating system on the Raspberry Pi in no time. Emteria.OS is a full build of Android available for Raspberry Pi. There is three versions of emteria OS: Evolution, Personal, and Business version. Evolution version is free to use, but with some limitations while for the personal and business version, you have to pay per device.

The current version of emteria  OS is mainly for businesses uses. In industries, you can use emteria OS from vending machines and digital signage to the point of sale and industrial control devices.

Lineage OS doesn't officially support the Raspberry Pi, but some individuals customized it for the Pi 3B and Pi 3B+. Current  Lineage OS version is 15.1, which is based on Android Oreo 8.1.

The Lineage OS is for advanced users only, as it requires technical knowledge to set it up and to install apps. Google Play Store isn't installed by default. But still, you can install the Android apps using APKs.

Android Things isn't the right choice for most users, as this Android Things OS is different from the version of Android found on tablets and phones.

Android Things is mainly used for developing Internet-connected appliances and other IoT devices, and it only allows the user to run a single Android app at a time. It’s a lot more simplistic than full Android, and you need to program it from a separate computer. You can use the Android studio for programming your devices.

There is some custom version of Android is also available; for example, Android 7.1, Android 8.1, and Android 9 Pie. If you're technically proficient, then you may want to try out these Android TV and Android tablet versions of Android on the Raspberry Pi 3. But these custom versions come with a smattering of apps, and you should expect to encounter stability issues.

If you’re looking for developing Internet-connected appliances and other IoT devices using Android, then use Android Things otherwise for commercial Android support on Raspberry Pi 3, you can try emteria.OS. The Evaluation version of emteria.OS is free to use but as told earliar, this version has some limitations, but you will be able to use for some general purpose applications and figure out how good it performs before you buy it.