ESP32 is really a powerful IoT device having inbuilt support for Bluetooth and WiFi. The ESP32 is advanced version of its predecessor ESP8266 with extra features like RAM, ROM, GPIO Pins etc. The ESP32 module supports both classic Bluetooth and Bluetooth Low Energy (BLE), the classic Bluetooth can be used to transfer songs or files and the BLE option can be used for battery optimized applications like Bluetooth beacons, fitness bands, proximity advertisements etc. It is also possible to use ESP32 as a serial Bluetooth like the HC-05 or HC-06 modules for simple microcontroller projects.

As we know the BLE can operate in two different modes - Server mode and Client mode. Both the modes have been discussed in our previous ESP32 Tutorials:

In this tutorial we will build a BLE iBeacon using ESP32 where ESP32 will act as a server and smartphone will act as a client. I assume that you are already familiar on how to use the ESP32 board with Arduino IDE, if not fall back to the getting started with ESP32 tutorial.

You can also know more about what is Beacon/iBeacon Technology by going through our previous Bluetooth iBeacon projects using Raspberry Pi and HM-10 BLE iBeacon.

There are many BLE scanner apps, one of them we have used in our previous project of How to Use HM-10 BLE Module with Arduino. This BLE scanner app provides good Graphical Interface (GUI) but lacks in additionally information so in this project we are using NRF Connect for Mobile app.

1. Download the nRF Connect app from Google Play Store and Open it.

2. The screen looks like below. The Useful options for this project will be ‘Scan’, ‘Scanner’ and ‘Info’ when devices gets found. 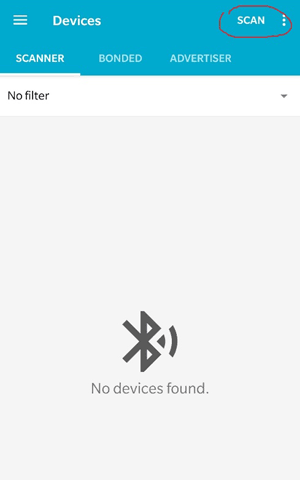 3.After searching the iBeacon, you will be able to see the RSSI, UUID, Major and Minor of iBeacon. The RSSI will change if you take the mobile or iBeacon away from each other. Here in this screen, the RSSI is (-37). Other than this there are some details such as Dummy Company Name, Device Type, Length of the Bytes, The Local Name of ESP32. Here it is “ESP32 as iBeacon”. You can change local name in the sketch. 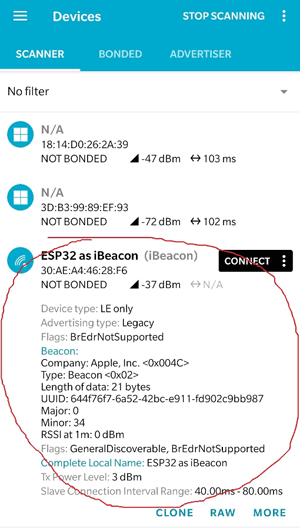 4. After taking away the smartphone from iBeacon, the RSSI value changes from -37 to -58. These values will keep on changing if you move one of the devices. 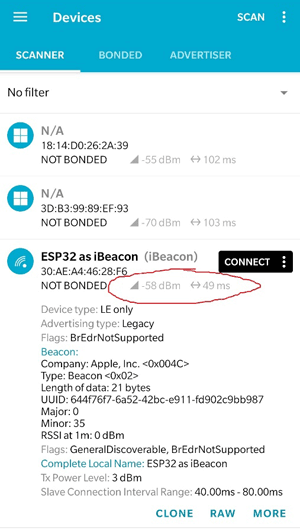 There is sample program of ESP32 BLE iBeacon available when you install the ESP32 Board in Arduino IDE. But we have slightly edited this sketch in this tutorial, the complete edited version of the sample program is given at the end of this tutorial.

To open the Sample Program of ESP32 BLE_iBeacon just follow below Steps.

Now there is a slight modification in the code which is done in this tutorial. The ESP32 Name will also be updated in this sketch. So start with inclusion of necessary Libraries which will be used in Creating BLE Server and iBeacon.

This is a time library to get the current system time. This contains functions such as tv_sec, gettimeofday() etc. For more information, you can visit official UNIX release of ‘sys/time.h’.

Then the ESP32 BLE libraries are included which contains many functions used to make ESP32 in different configurations such as BLE Client or BLE Server.

Then define the BLE Advertising Type. The definition is done as follows.

The timeval is defined as structure to access the current time.

Also the UUID is defined. The UUIDs can be generated from this link.

Now create a function which will contain iBeacon attributes such as UUID, Major, Minor, Etc. In this function create an instance for BLE as iBeacon, and set a fake manufacturer ID, UUID, major and minor for ESP32 as iBeacon.

Set the flag as 0x04 so that it will output BrEdrNotSupported in the scanner.

Add the string one after other to advertise.

Start the advertising by publishing data.

Begin the serial monitor at 115200 baud rate and get the time. Also increment the bootcount to store the number of Resets.

Store the current time in the static memory.

Create a BLE device and name it as you want. Here the ESP32 is named as “ESP2 as iBeacon”. Note that the, the names can be long but this version of code has started the support for long names.

Then set the ESP32 in iBeacon mode.

Finally Plug the ESP32 Development Board with your Laptop using a Micro USB cable and upload the code into ESP32 using Arduino IDE. Then open the nRF Connect Android App in your smartphone and start scanning. You will find ESP32 as iBeacon broadcast as shown in the below picture: 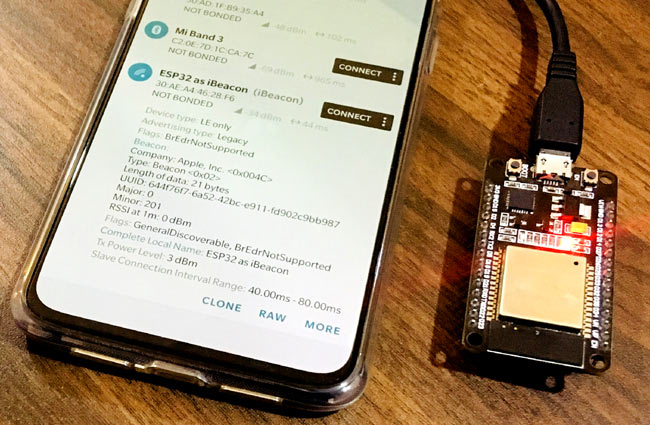 This is how ESP32 can be used as BLE Beacon to advertise UUID, Major and Minor. If you want to know more about iBeacon then follow our previous tutorial on HM10 as iBeacon. Also if you have any doubt then comment below or ask questions in forums.

Complete Code with a working video is given below. 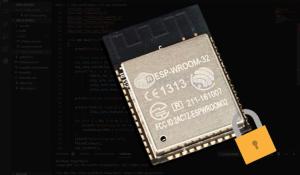 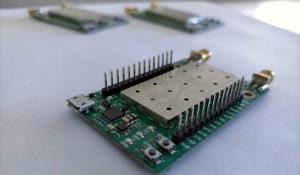