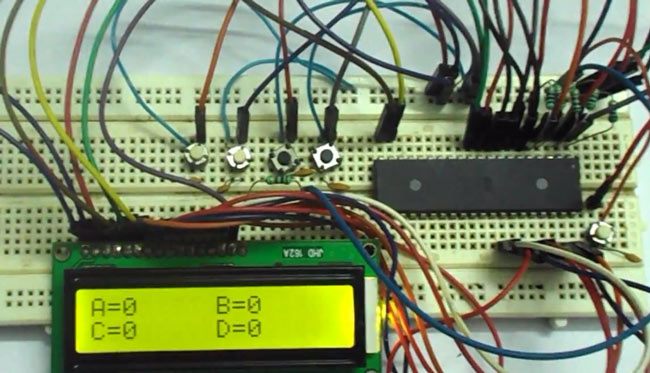 Whenever we go to vote for elections we come to see electronic voting machines. In this project we are going to design and develop a simple voting machine by using ATmega32A microcontroller. Although we can use the controller to get more than 32 people voting machine, to keep everything simple we are going to make a voting system for a size of four people.We will have four buttons for four people and whenever a button is pressed, a vote goes for the corresponding person and the number of votes each person gets shown on LCD.

As shown in the above electronic voting machine circuit, PORTA of ATMEGA32 microcontroller is connected to data port of 16x2 LCD. Here one should remember to disable the JTAG communication in PORTC of ATMEGA by changing the fuse bytes, if one wants to use the PORTC as a normal communication port. In 16x2 LCD, there are 16 pins over all if there is a back light, if there is no back light there will be 14 pins. One can power or leave the back light pins. Now in the 14 pins there are 8 data pins (7-14 or D0-D7), 2 power supply pins (1&2 or VSS&VDD or gnd&+5v), 3rd pin for contrast control (VEE-controls how thick the characters should be shown), 3 control pins (RS&RW&E).

In the circuit, you can observe that I have only taken two control pins as this give the flexibility of better understanding. The contrast bit and READ/WRITE are not often used so they can be shorted to ground. This puts LCD in highest contrast and read mode. We just need to control ENABLE and RS pins to send characters and data accordingly.

So from mere observation of above table we are connecting 10 pins of LCD to controller in which 8 pins are data pins and 2 pins for control. There are five buttons present here, four for incrementing the votes of candidates and fifth is for resetting the candidate’s votes to zero.

The capacitors present here is for nullifying the bouncing effect of buttons. If they are removed the controller might count more than one each time the button is pressed. The resistors connected for pins are for limiting the current, when the button is pressed to pull down the pin to the ground.

The working of  this microcontroller based electronic voting machine is explained in step by step of C code down below,

hi i have be following up

hi i have be following up with ur demos .please how then can you pass a string as arguments of a function?cause i want to control multiple pwms by sending different duty as a string at a time

Send the brief detail on your

Share the brief detail of your project i will help you.

i have made an led display

i have made an led display with two colours leds using two pwm pins .pinD7;pinD3 on the atmega32. i want a way to change the duty of each led by passing the commands using my keyboard .so that at one i can make one colour brighter than the other. thanks

Can you help me please?

Iam try to do the same thing that you already here did. But with xmega board in Atmel studio 7.0. And i have a problem with the code that you already did here. Can you help me with that???thank you

hi.i wanted to simulate the code in CV-avr and make a .cof file for Proteus.
could u please help me?

What is the function snippet

What is the function snippet for send_a_string.