It’s all started with a small game from the dark ages called “Mario”, right from the time of being a tiny little guy jumping on ducks to save my princess till being a masculine handsome Prince roaming in Persia (Prince of Persia) fighting against darkness to save my world behind I have been a great fan of playing video games and I grew up playing them. But they do get bored up sometimes and I feel less involved into it. Today, the advanced gaming consoles enables virtual gaming and helps us to feel the game a lot more better than a keyboard or a mouse can do.

Being an Arduino Enthusiast I tired playing the famous game called “Angry Birds” using keyboard & mouse and decided to build my own Game Controller using a Flex Sensor and a Potentiometer. When the flex sensor is pulled the bird on the catapult will also be pulled and you can use the potentiometer to set the direction in which it should be launched. Then when you release the flex sensor the bird will be launched. I pretty much enjoyed doing it, so if you are up to building something very similar then this tutorial will be a helpful. This tutorial will also be helpful in Controlling Mouse Cursor using Potentiometer. 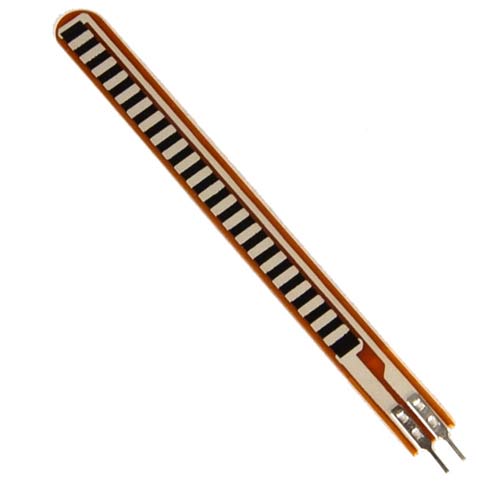 The Arduino Board reads the values from the Potentiometer and Flex Senor and Transmits them to the Laptop/PC through USB COM port via normal Serial.write() function. We then read this information using Processing and control the mouse cursor using the Robot class in Java which is supported by processing IDE. We have programmed the processing IDE in such a way that when the Flex sensor is pulled a mouse click will be made and based on how much it is pulled the mouse pointer will move in X direction. Then based on the value from potentiometer we will move the mouse cursor in Y direction, this way we can set the direction in which bird should be launched. 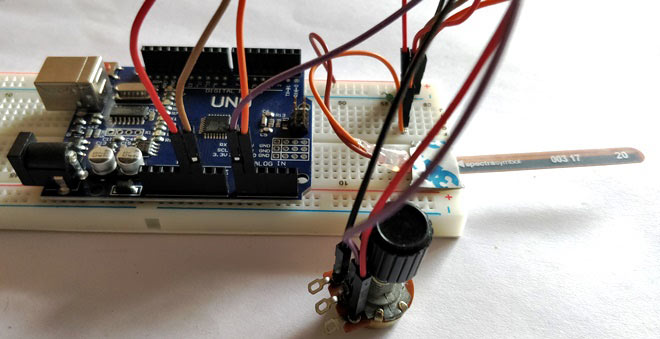 The circuit for playing the Angry Bird using Flex Sensor and Potentiometer is easy.

We have simple connected a potentiometer and a flex sensor to the Analog inputs (A0,A1) of the Arduino. The output of the Flex sensor is also pulled down using a 47K pull down resistor.

You can directly connect it on breadboard or solder them to a Perf board and assemble it on a gloves or something to make it more creative. I have simply used a breadboard to do my connections as shown below:

The complete Arduino code is given at the end of the tutorial. Few important lines are explained below.

We initialize the program to work with 9600 baud rate and start reading the values from Flex sensor and Potentiometer. As we know serial.write() function can send only one byte of data at a time. Since One byte is 8 bits and 2^8 = 256. We will be able to send values from 0 to 256. So we have to compress the values of Flex sensor output and Potentiometer Output into 0 to 256.

To do that we use the map() function in Arduino. All the values from the flex sensor are converted from 5 to 100, so when we bend the sensor it will increment from 5 and when released it will go back to 5. To mention the mouse clicks the value 1 and 0 is used. When 1 is sent the mouse is pressed and when 0 is sent the mouse is released.

Similarly the values form the potentiometer is converted from 101 to 200 sing the map() function and is send to the Laptops COM port suing the Serial.write() function as shown below.

The rest of the program is explained using the comments.

Processing is an Open-Source development application and can be easily downloaded and put to use for developing interesting projects using Arduino or other Microcontrollers. We have already done few projects using Processing and you can check them out by clicking on the links below.

In this project we have used the processing IDE to read the COM port values and control the mouse pointer based on the values received via the COM port. The complete Processing Code for this Angry Bird Game Controller can be downloaded from the below link:

Arduino Program can be found at the end of this tutorial. The Processing code was modified to fit for our purpose from the code given by yoggy on his GitHub page.

The data coming from the COM port should be read in the same baud rate in which it was sent from Arduino. Also check which COM port your Arduino is connected by using the device manager. My Arduino was connected to COM3 and it was the 0th Port in my computer and the baud rate in Arduino was 9600 so the code is as follows

Once we start reading the values we distinguish it by recognizing it based on its value on how we sent from Arduino. The values are again mapped from 0 to 100 so that we will be able to control the mouse based in that value.

The processing IDE when launched will also display a small dialog Box on which you can find the values of Pull, Turn and status of Mouse Click as shown below 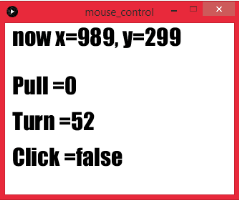 This detail can be used to debug the Program or correct any data required.

To make this Angry Bird Project work using the code provided, assemble your hardware according to the circuit diagram and upload the given Arduino Code. Then Note which COM port your Arduino is connected to and make the necessary changes in the Processing code and launch the processing sketch.

Now, simply launch the angry bird game and place you cursor near the catapult and pull the flex sensor to pull the bird and set the direction using the potentiometer. Once the direction is set release the Flex sensor

You bird will be tossed right into the air and BOOMM!! On  the piggies. The complete working can be found in the Video given below. 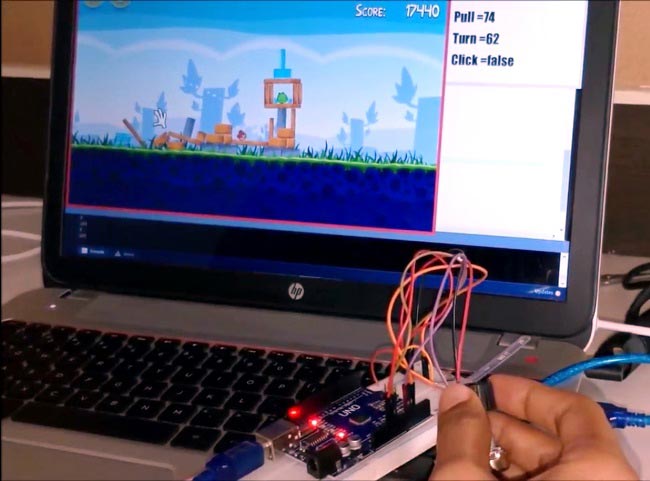 Hope you enjoyed the project and were able to build something similar. If you have any doubts you can reach me on the comment section or post your question on the forum for technical questions.

Now, time to crash into those piggy boxes and get back our birds eggs!!!!