Statistics say that the robotics industry is growing at a faster pace than ever! From self-driving car factories to distribution warehouses, the deployment of robotic applications is expected to increase across multiple industries in the foreseeable future.

Robots help in envisioning a near future where humans and machines seamlessly interact to achieve solutions to real-world problems. Today, manufacturing and warehousing lines are using robots to increase productivity, but automation is expensive and is only accessible to large enterprises. With the idea of building collaborative mobile robots that are capable of learning from humans in real-time, Rishabh along with his co-founders - Alok and Tanya started the company named ‘Peer Robotics’.

Peer Robotics is a collaborative mobile robotics company that builds robots that could work alongside humans to enhance their productivity and efficiency. They have built the first-ever collaborative mobile robot that understands humans through haptic feedback. To know more about the robots built by the company, the technology involved, and their future plans, we had a word with Mr. Rishabh Agarwal, who is the CEO of the company. 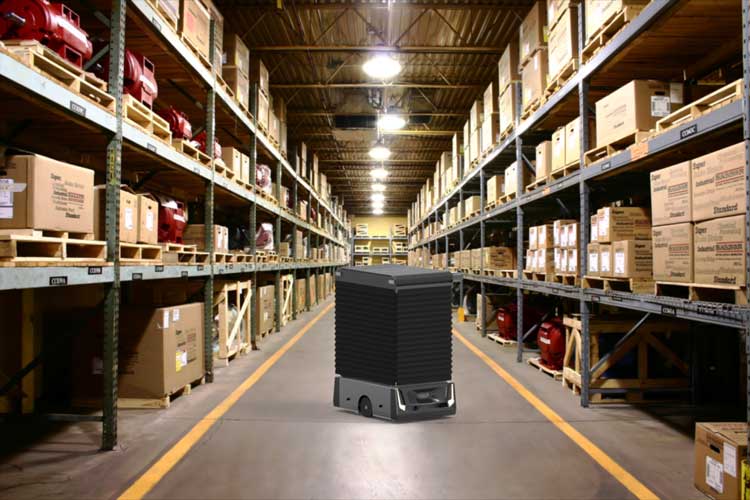 Q. Tell us about Peer Robotics and the type of robotic solutions the company offers.

At Peer Robotics, we truly believe that the future lies in collaboration between humans and robots, and not fixed automation. With that ideology in mind, we build mobile robots that can learn from humans in real-time allowing people on the factory floor like material handlers, operators, package mowers to simply deploy these robots by moving them like a shopping cart. In this process, they can program it and the robot can do that task again and again. Think of it as a Roomba, but for the material handling solutions, and manufacturing and warehousing lines. 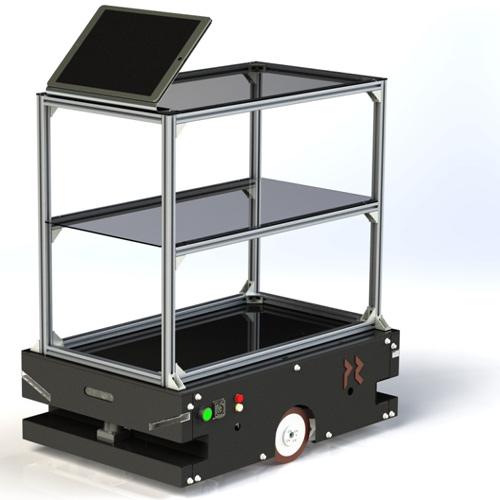 Q. What inspired you to start Peer Robotics? How has the journey been so far?

I am from a manufacturing background, my dad had a small manufacturing line and while growing up, I had a chance to see how things change drastically over the years, especially for small and medium scale enterprises. I did my Bachelor's in Mechanical Engineering and Masters's in Systems and my co-founders - Tanya and Alok are also experienced in the field of robotics. Over a few years, we saw many industries trying to automate or looking to get the value out of automation. But some are still stuck at just POC levels, or initial stages. One of the factors that we identified is the complication around automation. So the user still sees the robot as a separate entity that comes into their facility, and now they have to worry about that. It's not a part of their ecosystem or their processes. 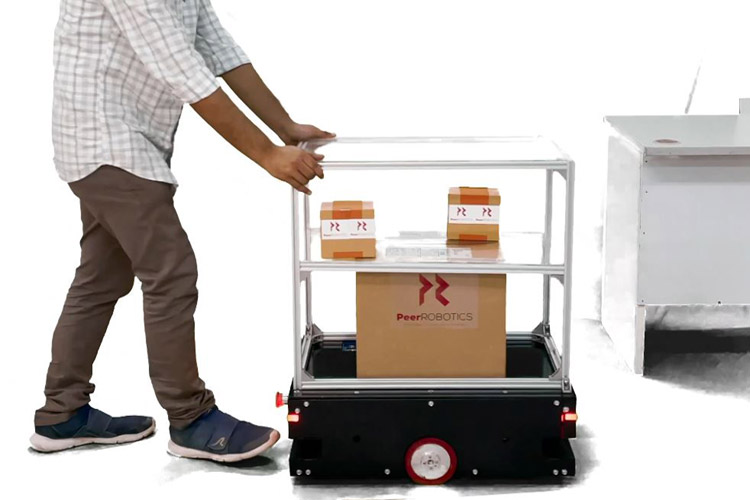 That's how we started working on Peer Robotics from the idea of making these robots as simple as laptops. So, no one has to worry about who is going to set my laptop or what happens if I'm downloading the new codes or writing excels or whatever. With that idea, we started building the robots, the core idea was always that how humans on the factory floor/warehouses can work with these robots without software engineers, or experience in training to deploy and work with the platforms.

Q. What kind of industries does Peer Robotics serve? Can you give any case study?

Currently, our focus is towards material movement or in general, mobility in warehouses and discrete manufacturing to be exact. Consider automobile manufacturing units, OEMs, aerospace manufacturing, EMS, contract manufacturing for electrical or even mechanical systems. In the operations are the tasks we are doing are very much similar to the lean manufacturing ideology. Water spider, dawn bond replenishment, or even one-piece flow or continuous flow are the operation and manufacturing lines are trying to do. In all these areas, Peer Robotics is building solutions to support their flow of goods, and ensuring that the people on the factory floor can focus on a productive task, which is the assembly or the machining of that particular tool rather than the unwanted movement of parts from one place to another. 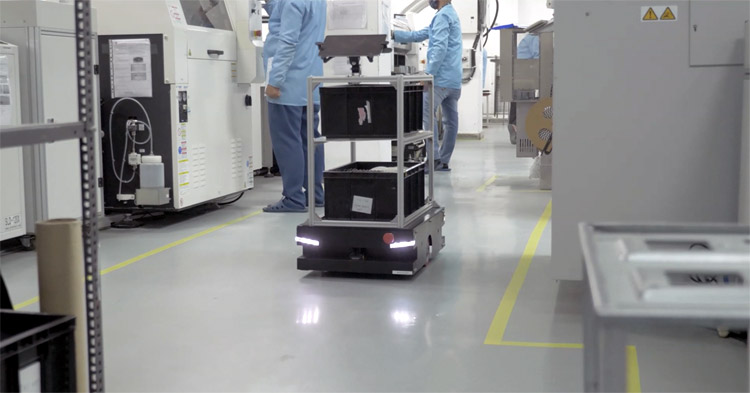 Q. What makes the robots from Peer Robotics easy to configure and use?

That’s our secret source from the perspective that our robots can understand human feedback. Let's say, there's a platform that acts just like a shopping cart, to begin with. So you can apply a force on the robot and the robot recognizes that force feedback and can learn from it and actuate it. If someone asks to deploy the robot, all they have to do is simply take the robot physically by just grabbing it and moving it around on the factory floor and in this process; the robot learns all the end locations or even the path that the operator wants the robot to follow. So, next time onwards, it can do it autonomously. So literally, within minutes, we can teach the platform and deploy it.

Q. Peer Robotics builds robots that would work alongside humans in industrial environments. How do you ensure safety and productivity in such an ecosystem?

This is one of the core ideologies because we believe in not just working next to humans, but working with them like existing as a peer to the already working man force/labor force working in the factory line. Our robots are built from the perspective of just like a driverless car. We have LIDAR cameras around the systems that allow the platform to recognize how things are changing, how people are moving around the platform, and ensuring that will give you are taking the right decision around them. But along with that, our secret sauce helps us to understand humans. If let's say, we are in the way or a human is in the way of the robot, they can apply the force or simply grab the robot and the robot actuates. At the moment of interaction, the robot simply acts as a peer, so they can move the robot from one place to another or just take it out from the location in just a second. And once we are done, the robot will start doing its task again.

Q. Being one among the few Robotics companies in India, what kind of challenges does Peer Robotics face, and how do you deal with them?

The ecosystem matters a lot and in India, given that there are still very few robotics companies working or operating, there is a technical shortage as well. Sometimes, it’s hard for us to build up a strong team, whether it's not just about the core leadership, but at the same time ensuring that everyone in the team has scale towards the task of developing the platform, deploying the platform. But along with that, it's also about the education that we have to provide to either our users or our partners about how our platform is going to change the way operations were done so far. We are in this phase of transition from predictable to dynamic operations. For operators or the factory floors, or for the warehousing to understand that this transition will require automation that is as adaptable as humans. It's a very key task for us and that's the challenge we face right now. More from the perspective of adoption and building a strong team that has the skill set, or experience in this area for quite some time.

Q. How would you comment on the availability of components and resources when you're building a robot here in India?

That part is still I would say a little bit better in that sense because we do have a global supply chain. As I mentioned, me and the other co-founders of the company are from IIT Delhi. And as part of that process, we were able to build robots when we were in IIT Delhi, and that experience itself helped us to connect to the wider global ecosystem in understanding where the parts are, how we can procure them who can do the manufacturing, whether it's in India, whether it's even in Germany or Japan. It allows us to create an ecosystem or I would say a supply chain, which is global, but that being said, we can acquire most of the components from the local Indian market itself.

Q. How do you see the market for Robotic solutions here in India? Who are some of the popular clients of Peer Robotics?

There is a demand, and there is a need because there is a potential of driving the throughput. And for that throughput, everyone is trying to strive for, and early adopters are always automobile manufacturers that we have seen. We are also working with some of the largest automobile manufacturers in India. But along with that, some of the warehousing industries have great potential on adopting these platforms.

Q. What is Peer Robotics currently working on and what are your future plans?

So far we have deployments going on in India. We are building these platforms, from a perspective that we are not just serving large enterprises but also small and medium scale enterprises. With that ideology in mind, our focus is to build the out-of-box solution, which we can ship to our end users. They can deploy it without any assistance within minutes. Even the market that we are focusing on is global, not just the Indian market. We have started working along with some of the American companies right now transitioning slowly on the American SME market and Germany, Japan are the potential markets where we'll also be expanding along with India.

Q. New age engineers are fascinated to work on Robots and many are willing to set up a career in robotics. What would be your word of advice to them?

One thing that I learned from our professors during the time I was in IIT Delhi, or other universities, is that we should first identify what we like doing. Robotics is also a very wide area like we have mechanical engineers, we have electrical engineering, software engineers, but identifying the area where you want to gain your expertise in and focusing on it for years and years because nothing good is going to come from like one month or two months kind of training. The focus should be on how we are focusing on something that we like doing. So, one piece of advice would be, transferring from my professors, is that rather than sawtooth progress of working on something, and then going down and starting something new, we should focus on developing system and giving it time throughout making sure that what we are doing is something we love. Once we have identified that, we should give in all of our time and effort towards making it one of the best skills.

Q. Are you looking for fresh talents at Peer Robotics?

Our software team, our firmware team is looking for highly skilled people to come and work along with us over the past four or five months. We have hired four or more engineers along with us. One of the key areas that we focus on is how dedicated they are towards the particular skillset and which level they have worked on over this period.

To add up to this interview, Rishabh pointed out the vast misconception that people have about robots potentially replacing humans. He further expressed that robotics is a way to empower human ability by leveraging technology and a lot of robotics companies including Peer robotics are working towards that. The purpose of their robots is to increase throughput and overall productivity of production lines in warehouses and other industries without hindering human responsibilities and workflow.