Bionic Arm is a true innovation in the field of medical science that has changed the lives of millions. It replicates the functionality of the natural arm/hand to enable amputees to perform their day-to-day tasks with ease. A lot is being done in the bionic limbs industry, however, there are certain gaps to be filled to enable people with amputations to become futuristically-abled; affordability being one of them.

Makers Hive is a company that is working towards developing a fully functional customizable and mobile app-enabled Bionic Hand – KalArm. Keeping the economic challenges in mind, the Makers Hive team has developed an affordable fully functional Bionic Hand. We spoke with Chanakya Gone, CTO of Makers Hive about the prosthetic arm developed by the company, the technological aspects involved, and their future plans.

Q. How did the journey of Makers Hive start? What kind of problems is the company trying to solve?

Dr. APJ Abdul Kalam Sir’s ideas motivated us to start Makers Hive in 2018 with a vision to build cutting-edge assistive technologies to solve contemporary social problems in developing nations like India. The motive of our company is to democratize the assistive-tech industry, especially prosthetics. We build health-tech devices to empower the lives of amputees and transform them from differently-abled to futuristically-abled. We are focusing on the sectors that have been deprived of innovation for the past few decades. Our company builds world-class products in the bionics sector and makes them accessible and affordable for those in need of assistive technology.

Q. Makers Hive has developed a fully functional bionic hand called “KalArm”. Can you tell us about its features and how it differs from other bionic hands in India?

KalArm is a 3D printed light-weight and affordable bionic hand that combines uncompromised functionality with style. KalArm uses EMG sensing technology to sense inputs from the user’s (amputee) forearm muscles to perform various grips to hold objects of various shapes and sizes. Myoelectric technology allows for greater control and precision in the prosthesis. 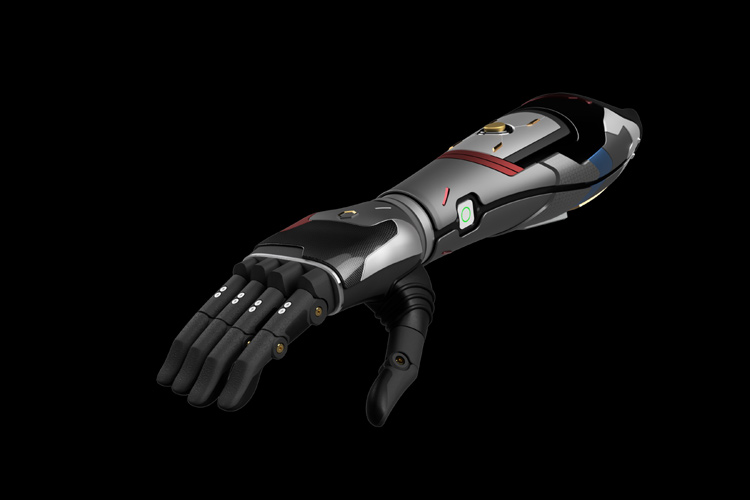 KalArm is a battery-operated below elbow bionic hand with features like 18 Pre – Defined Grips, users can use these grips to perform activities in daily life like holding a water bottle to drink water, knife to cut vegetables, pen to write, mobile phone, visiting card, picking up the car keys from the table, etc. KalArm comes with a special grip to hold sensitive objects like an egg.  With the provision to add 6 Custom Grips, users can add grips of their choice by entering finger positions in the KalAssist application. It has 8 Kgs of lifting capability that enables users to monitor the health status of various internal components of the hand like motors, batteries, sensors using the KalAssist mobile application. Besides, the arm features Wireless Firmware Upgrade. This feature enables users to upgrade the firmware of KalArm to the latest version which would give it access to the latest features. Additionally, it has customized panels that allow users to customize KalArm with various colors, patterns, and embossed designs of their choice. 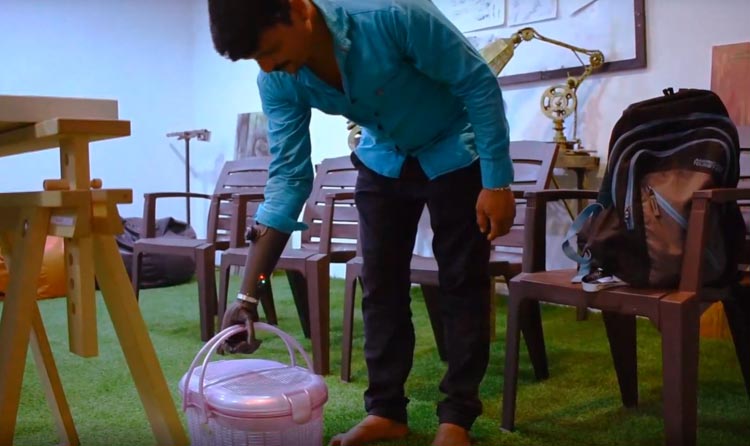 Q. Tell us about the design and development experience with KalArm. How did it evolve from prototypes to final products?

Once we had figured out what we wanted to build and realized its potential to make an impact, we started spending time with our end users (below-elbow amputees) to understand the problems that they generally face while performing their daily chores. We then spent a considerable amount of time with the doctors from prosthetic and orthopedic domains to understand the usage of biopotential signals (EMG signals) to control prosthetic devices.

These initial interactions with amputees and doctors gave us an idea about what the users are expecting. Our market research and competitor analysis helped us finalize the product requirements. We then started our design thinking process to build a prototype that can capture EMG signals from the amputee’s forearm muscles and drive the motors to open/close the fingers.

After repeated testing with our users, we realized that the use of wet EMG electrodes was not a great option as the user had to replace the electrodes very frequently. After some research, we found out that the EMG sensors that are currently being used in the Indian market were being imported and that a pair of dry EMG sensors cost more than 1 lakh. As we had already decided to build an affordable bionic hand, the team at Makers Hive, having strong expertise in designing and manufacturing electromechanical products took it as a challenge, designed and built the EMG sensors completely in-house.

The alpha version of the product was incorporated with our dry EMG sensors, and we could achieve human hand-like finger motion with KalArm using advanced software algorithms. We incorporated 18 default grips in this version along with mobile application support via Bluetooth. A detailed usability testing was done with amputees (with various age groups, education levels, amputation types, etc.) in the presence of a Certified Clinical Prosthetist. The feedback that we got during this stage helped us improve the product in terms of safety and we slowly moved from the prototyping materials to medical-grade materials to give maximum comfort to the user.

The beta version of the product was developed keeping value engineering in mind and the global compliance (IEC, ISO) standards. KalArm successfully passed all the required tests conducted at NABL approved laboratories. After minor design changes and optimizing the weight, we launched KalArm on December 3rd, 2020.

Q. How does KalArm use EMG sensors to obtain feedback from its users?  How is the hand able to select between the 18 different grip patterns?

KalArm works on Electromyography signals. Electromyography (EMG) measures muscle response or electrical activity in response to a nerve’s stimulation of the muscle. KalArm uses the existing muscles in the amputee’s residual limb to control its functions. Two sensors fabricated into the prosthetic socket receive electrical signals when the amputee intentionally engages specific muscles in their residual limb. These signals are further amplified and processed by the sensors and later converted into meaningful commands that are sent to the control system. The control system unit converts the received commands into useful grip patterns by driving the motors (present inside the palm area of KalArm) that close and open the fingers. 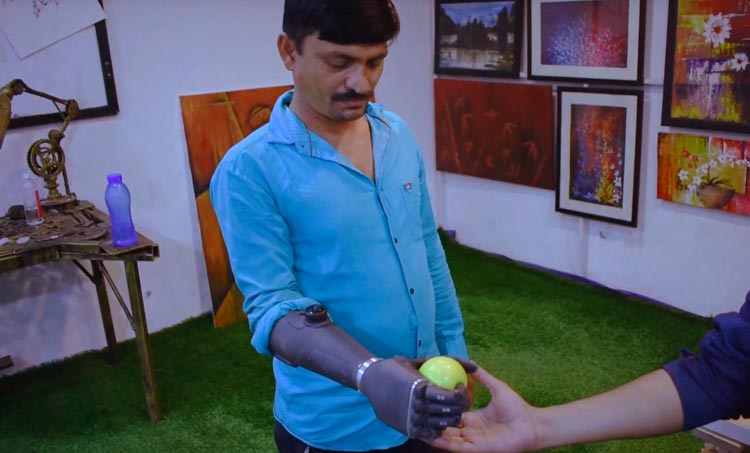 Hold, long hold, double impulse, triple impulse, co-contraction, and long co-contraction are the possible movement commands of KalArm. Upon applying particular EMG signal commands, the bionic hand enters pre-allocated grip patterns. KalArm comes with four different Modes. The first three are the default modes consisting of 18 pre-defined grips. While the fourth mode is a custom mode; the user can add up to 6 custom grips here. The multi-functional button present on the device can be used to switch between the modes.

Q. Is the entire body of KalArm 3D-printed according to its user? What kind of customization can be made with each hand?

KalArm is built as per the human hand anthropometric measurements. It comes in one standard size till the wrist part. It comes under medium human hand size dimensions which will suit most of the amputees. The forearm part is customized as per the amputee’s residual limb. Users can choose from a wide range of materials like PA 12, carbon fiber, and thermoplastics for the forearm. Customization can be done for the palm’s outer panel and forearm panels. Customization includes colors, patterns, and embossed designs.

Q. KalArm also has a mobile application to monitor the health of sensors and motor interfaces? What kind of data do you analyze here and how do you use it to improve performance?

KalArm consists of a control system that continuously tracks the working condition of the key components, like motors, battery, and EMG sensors by analyzing parameters like encoder, current sense feedback, device voltage level, device temperature, battery temperature, EMG signals, etc. It sends the data to the mobile application which provides alerts/notifications to the user. 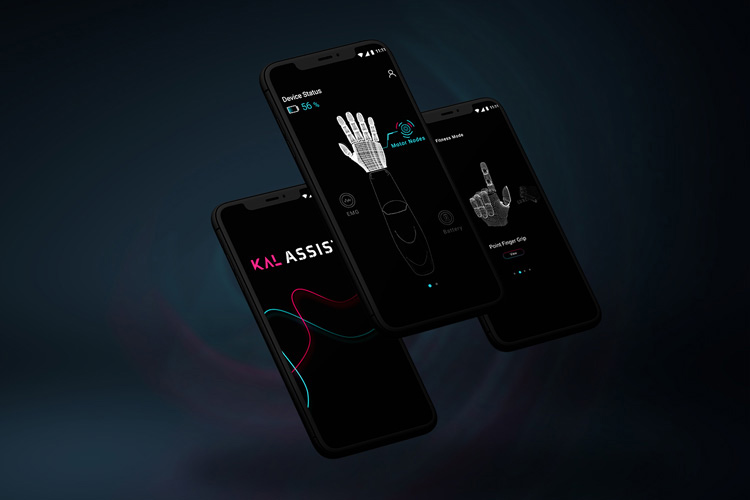 All the critical components of KalArm are represented either by red or blue dot in the mobile application. Red indicates that something is wrong with the node, while the blue dot indicates that the status is good. Device health monitoring feature of the arm plays an important role in the serviceability aspect of the device, where detecting the health of various components will help in identifying the exact issue and providing the required support to the user in resolving the issue in a significantly less time compared to the existing devices. KalAssist application communicates with KalArm via Bluetooth.

Q. KalArm was designed and developed in Hyderabad. Being one among the few companies working on Bionic hand, what kind of technical challenges did you face and how did you handle them?

KalArm is an electro-mechanical product with integrated firmware. One of the key design considerations was that the overall dimensions of KalArm had to match with normal human hand dimensions. To achieve this, we needed miniature motors, sensors, and high-strength lightweight materials. One of the challenges we faced was with regards to the linear actuators that were required to open and close the fingers. We needed miniature linear actuators that could fit in the palm while also offering high torque, but we could not find any such actuators in India. We took it as a challenge and developed our linear actuators with self-locking ability that can handle up to 15Kgs load.

One other challenge that we faced was related to the thumb position feedback system. We needed something accurate, small, and durable. Systems used in existing bionic hands were way too costly and not reliable. To address this issue, we developed our own contactless position feedback mechanism for the thumb swiveling system in KalArm. We have also filed a patent for the same.

During the development of the prototype, we realized that the usage of wet EMG electrodes was not a good option as the user had to replace the electrodes very frequently. After research, we found that the EMG sensors that are currently used in the Indian market are being imported and a pair of dry EMG sensors cost more than INR 1 lakh. We took that as a challenge and built our EMG sensors which not only capture the EMG signals but are intelligent enough to detect if the user is wearing the bionic hand or not and sends the feedback to the control system so that the device can enter power-saving mode when not in use. We have also filed a patent for the same.

Q. What is your go-to-market plan with KalArm? How do you see the demand for bionic hands in India?

Currently, there are more than 6 million amputees in India. Most of the amputees in India use mechanical and cosmetic hands that serve no purpose. In the last couple of decades, people have moved towards Myo electric hands that just open and close. Most amputees cannot afford advanced bionic hands and are eagerly waiting for an affordable bionic hand. KalArm is 10 times more affordable than western alternatives while offering plenty of Industry-leading features. Since the launch, we have got more than 500 requests from India, Sri Lanka, and Bangladesh.

Q. What is Makers Hive currently working on and what are your plans for the future?

We are currently working on setting up the Manufacturing plant (as per ISO standards) for bulk production and after-sales service. Makers Hive will continue to innovate in the Med-Tech domain and consistently work towards making world-class assistive technology affordable. We are planning to venture into Exoskeletons for enhanced mobility and the paraplegic, Bionic eyes for the visually impaired, and other bionic products.