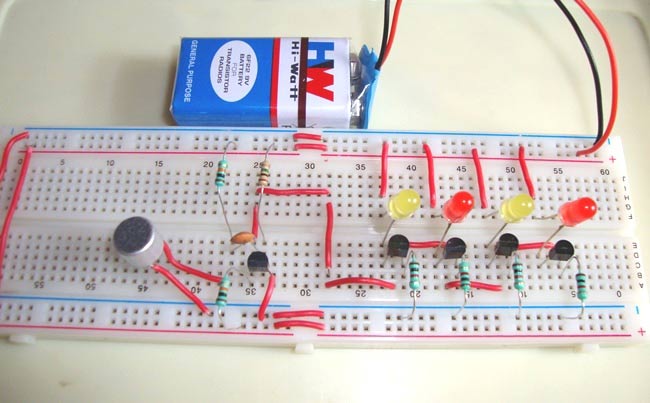 You must have seen the Disco Lights or DJ lights, which Turn ON and OFF according to the beats of the music. These lights glow according to the length and pitch (volume) of music beats, basically these are designed to pick the high intensity sound like Bass sound. So these lights follow the high pitch beats in music like drum beats, and Turn ON and OFF according to music pattern. However the sensitivity of the circuit can be increased to pick the low notes too.

Previously we have built Dancing LEDs, which just follow a set pattern and we can only control the speed. Now we are taking this to next level, i.e. Music Operated Dancing LEDs, in which LEDs will flash according to music, just like Disco light, as discussed above. This Musical LEDs circuit is based on transistor BC547. This circuit is very simple and easy to build, it just requires few basic components and it looks very cool.

In this Simple LED Music Light Circuit, condenser mic picks up the sound signals and converts them into voltage levels. These voltage signals are further fed into R-C filter or HIGH PASS filter (R2 and C1), to eliminate the noise from the sound. Further a NPN transistor (Q1- BC547) is used to amplify the signals, from the High Pass filter. Then finally these music signals are given to the array of four transistors. Transistor in this array works as amplifier, and glows the four LEDs according to the sound pattern. This generates a very interesting sequence of dancing LEDs which follows the beats as per their intensity or pitch. We can also add more LEDs with transistor to make it cooler.

We can adjust the sensitivity of MIC by changing the value of R2 and C1, by using the formula for R-C filter:

F is the cut off frequency, means filter only allow frequency above than F. It can be easily deduced that more the value of RC, less the cut off frequency and higher the sensitivity of MIC. And higher the sensitive of circuit means MIC can pick low volume sounds, hence LEDs can glow on low pitch music also. So by adjusting its sensitivity we can make it less sensitive to reacts only on high note beats or we can also make it more sensitive to react on every little beat in the music. Here we have set its sensitivity at moderate level.

Condenser Mic should be connected properly in the circuit, according to its polarity. To determine the polarity of MIC one should look at mic terminals, the terminal which have three soldering lines, is the negative terminal.

why do we use a tranisitor here?

what s the role of the transistor here in the circuit ? y we need it ? wat s d main role in tis circuit ?other than transistor can any other element be replaced ?

Transistor is used as

im trying to get mine to work and have done all the hook ups and it still isnt workign. please help

I am completed all this

I am completed all this circuit connection, but can't work it.
plz help.

Check the polarity of mic and

In this circuit transistor

In this circuit transistor acts as switch. however, I use 220ohms resistor instead of 1kohms and I added another resistor(also 220ohms) between the collector of Q1 and base of Q2, then it works.

I did the same connections as

I did the same connections as above but the LEDs are glowing without music too.Can anyone help out?.
I want to know how connections are done. Especially the bases of transistor.
Please reply fast

Reduce the value of 1 M

Reduce the value of 1 M resistor or use variable resistor instead and adjust the sensitivity.

I reduced 1M ohm resistor to 1Kohm then too the leds r glowing on its own ...Any solution???

as u r connected Microphone

as u r connected Microphone The Small Audio Inputs Are Also Causing THe LED Action.Insted Of Mic U Can Also Add A Audio Input Signal For A Perfact Action.,

The circuit worked perfectly :) , but i want to know what will happen if we replaced the MIC with a high voltage signal.

Not getting your question.

Not getting your question.

This circuit is really great and cool. I just wanna know if it is ok to use low pass filter instead of high pass filter to make the LEDs blink on and off to the bass.

No, you should only use High

It does not make any sense to have a HP filter  as the 'beat' is in the lower frequencies. Further a HP lowers sensitivity

who current through in transistor

if i want to increase no of

if i want to increase no of led's ......wht chnges comes in circuit ? should i have to increase voltage ?

For a 9v battery you can glow

For a 9v battery you can glow up to 25-30 LEDs, more the LEDs, faster will Battery run out.

I was just wondering if it is ok to use other types of non-electrolytic capacitor instead of ceramic capacitor? Thank you

yes, but of the same value.

yes, but of the same value.

What's the function of R1?

What's the function of R1?

Resistor R1 (10k) has been used as a Pull up resistor to connect Condenser mic to the positive supply voltage, to provide the power to the mic.

R1 sets the voltage for the condenser mic. This type of mic requires a power  supply

hi! Hey I was wondering if instead a mic I could use a jack, a mono one of course....also, if I wanna turn brighter leds ill just lower the 1k resistors, no?
Thanks, nice project btw!

hey,
which type of mic we can used , if we are not using condensor mic?

what is the total cost of

what is the total cost of this ?
could you propose me a circuit total cost under Rs.50.

This project will cost you

This project will cost you under Rs 50 + Breadboard

What do you means by "precise

What do you means by "precise values" ?

can you teach us how to make this kind of project.steps please

can you tell me what's the

can you tell me what's the role of BC 547 npn transistor in the circuit and how it is happing I.e, the LEDs r
glowing in presence of music
what actually happening when supply voltage is given to the circuit

can u plz provide the ckt digram

Can u please forward me the circuit diagram

hai , can we extend the circuit , i mean can we increase the no of leds used in the circuit and driving capacity

Yes you can connect more LEDs

Yes you can connect more LEDs.

What is the value of R2

What is the value of R2

A great site and an

A great site and an interesting Q&A. I can't say more than to say thanks..
I have gotten all the questions.
I love the comprehensive explanation from the cct analysis.
Kudos to you..
I have bookmark you already

We have built the circuit but the leds are unresponsive to music - they flash if we clap our hands beside the mic but otherwise nothing. Circuit has been built using exact components described and follows exactly the same layout. Any suggestions?

Hy CLaire ,I have the same problem with my circuit .. I designed a pcb board ... and all connection are good beacause how you say if i clap my hand the microphone sensing this , and for a few part of a second , leds flash. I don't know what's the problem ... have you solved this problem ? if anyone can help me with this problem I could offer him the pcb replacement (board) .

Tank you a lot . All the best.

There are several design issues with this circuit;

2_ the LED driving transistors are unbiased and so need at least 0.65V to turn-on

In your case it sounds (no pun intended) like it is "working" but you want the light extended.  A capacitor connected to Q1's Collector and Ground - say 10 uF - might help. Otherwise a 'pulse stretcher' circuit is needed.

There are several design issues with this circuit;

2_ the LED driving transistors are unbiased and so need at least 0.65V to turn-on

I want to make the circuit

I want to make the circuit more simple because i want to demonstrate in front of primary school student. If I reduce the number of led its will effect the circuit or not?

Should be no problem. Leds

Just make sure you add or remove a complete group when adding or removing leds.

how to do thiz circuit

I wanna this experiment pdf

I wanna this experiment pdf

I did the same thing except

I did the same thing except instead of 1M ohm I used 1.3 M ohm but my output is not coming.

What if there is no R1 and

The LED is glowing without the mic being present.

I have exactly represented the circuit like in the ckt diagram. But The LED's are always on. If i switch the polarity of the LEDS. Then they are OFF, but not recognizing the music input from the mic. (I have used a 1.3M ohm resistor instead of 1M and 104nF capacitor). This shouldn't alter the circuit by a lot should it?

Resistor value is crucial for

can I add a water dancing

can I add a water dancing circuit , so both circuits work together by using music

i want to know what the kind of mic is used
I want, I work for this circuit simulation program orcad do not know What kind of MIC is used

Use Relay with Each LED,

Use Relay with Each LED, learn to use Relay here.

What is the maximum no. of

Driving 100 LEDs need approx 2A current (20mA per LED), so you also need to change transistors and other components accordingly.

im trying to do this one with 100 leds..
if possible, can u please tell me the specifications of transistors and other components used for this..?

Ive got all the LEDs hooked

Kindly tell me about the

Kindly tell me about the working of transistors here

LED turns on even no music was played. Tried lowering the 1M ohm resistor value but the same happens. Even tried to remove it completely and it still doesn't work. Can anyone kindly explain whats happening to me please. Thank you.

Put the circuit exactly as

Put the circuit exactly as shown in the circuit diagram, it will work for sure. Further try replacing the Mic and other components, may be some faulty component is there.

can this circuit be modified

can this circuit be modified to make a audio level indicator??

Check this one: Simple VU

Awesome stuff, put together as directed and works awesome... well done... I am thinking on an improvement and adding four seperate transistors on different frequency levels to run four different colours (perhaps for an rgb light strip with required extra circuitry)

what are applications of dancing LEDs

What type of LED's Used in

What type of LED's Used in this circuit.plz reply ,Is not worked

I understand the amount of ohms needed for the resistors but I'm seeing a lot of variation in the ppm values and percents and all that jazz. Do these values need to be the same for all the resistors, or how do I know what ones to buy when building this circuit?

Value of resistor should be

my Board does not work

Try lowering the value of R2.

Try lowering the value of R2.

This circuit is working above certain frequency but what to do if I want to set upper frequency too simultaneously in same circuit? Please reply fast...

Hi, I just want to know if

Which type of mic use

Which type of mic use
Specifications