How to Build FM Transmitter Circuit 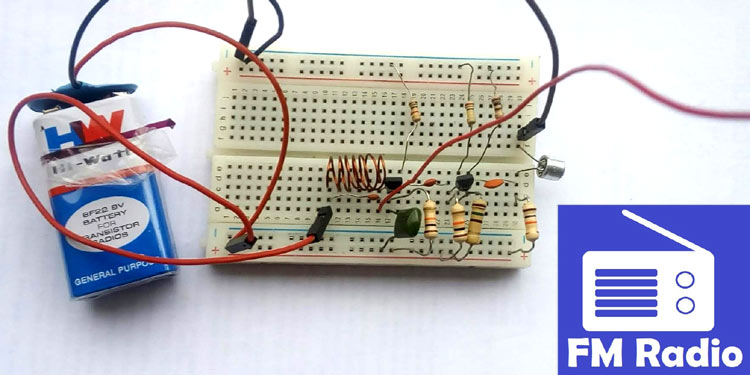 One of the cool projects I always wanted to build is an FM transmitter with a good range. I have always been fascinated by some of the applications of the transmitter especially when I was younger and like everyone else spent most of my time imagining how cool it will be to have some of the equipment and devices used in spy movies. So recently, while going over one of my home automation/security projects using the Raspberry Pi and the motion library, I felt it will be cool to add sound to the project and listen live, so asides from the video feedback being supplied by the Pi, I can also get audio feedback from the area being monitored. So during the ideation session to implement this Raspberry pi surveillance system, this FM transmitter idea came back to me, and while it won’t allow me to listen remotely (a distance beyond 10km), it will at least allow me keep an “ear” on things when around the house, and after building it I would have achieved some of the goals the younger me had.  So I finally found strength to build it few days back and in today’s tutorial, will be sharing how you can build your own FM transmitter circuit and believe me it works perfectly.

At this point it is important to state that, this is being done only for experimental and learning purposes as the laws of certain countries prohibits unauthorized broadcasting. It is thus important to keep the FM transmitter at a low range and ensure it must be built within the frame of the laws of your country and does not cause a nuisance to the public. I take no holdings for any mishaps.

A FM transmitter is a device that uses the principles of frequency modulation to broadcast sound supplied at its input. Typical FM transmitter design’s usually follow the block diagram below;

The signal strength of audio inputs into the transmitter is usually low therefore an amplifier is usually built to bring the signal level up. Based on the desired frequency for transmission (which is usually between the FM frequency band, 88MHz to 108MHz), the carrier frequency is generated using an oscillator circuit and mixed with audio signal to create the modulated signal. The modulated signal is then passed through a power amplifier at the transmission stage to create low impedance which is matched with the antenna.

The following components are required to build this FM Transmitter Project:

Most of these components can be salvaged from old parts.

Connect the components as shown in the Simple FM transmitter circuit below.

This is how this simple FM transmitter circuit looks on breadboard

The audio output signal from the microphone is usually small, the first transistor thus performs the job of amplifying that signal to a level good enough for transmission. After amplification as described earlier, the next stage of the FM transmitter is modulation. At this stage the amplified audio signal is then mixed with the carrier frequency at with which the signal is to be transmitted. This carrier frequency can be varied using the 20pF variable capacitor connected with the inductor, and the typical frequency band of this particular design is between the 88MHz to 108MHz and since there is no visual output to recognize the exact frequency at which the transmitter is working, you will need to adjust your FM receiver radio within the range of the frequencies mentioned to get the frequency at which the transmitter is transmitting. After modulating the Audio signal with the carrier frequency, the signal is then sent out through the antenna.

The air core inductor is made by winding a 8 to 10 turns of 18 – 22 gauge wire around a ¼ inch former which can be represented by a pencil. The values of components used for these tutorials are not stringent and for learning purpose, you can play around with the resistor and capacitor values to optimize the performance of the transmitter.

Asides from the uses mentioned above, FM transmitters along with this design can be used to create things like baby monitor, Address system for a school etc. DO ENSURE to check the laws of your location before building any of those useful things.

That’s it for this tutorial folks, another childhood dream accomplished!

Wish to have my radio station

Wish to have my radio station. Thanks for your l information on this matter