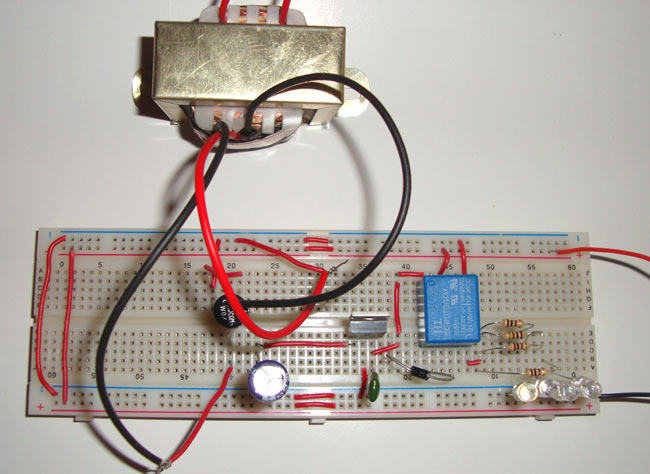 We can divide this LED emergency light circuit into two parts; first part is used to drop down the 220v AC voltage into 8v regulated DC, with the help of Transformer and bridge rectifier. And second part consists of Relay and rechargeable battery, which is used to lighten the LEDs during power failure.

In the first part of the circuit we have used Transformer 9-0-9 500mA, to step down the 220 voltage into 9v. Bridge rectifier is the combination of 4 diodes which is used to remove the negative half component of AC. This process is called the Rectification. Further, 1000uF capacitor has been used for Filtration, means removing the ripples in resulted wave. And voltage regulator 7808 has been used to Regulate the DC wave, to provide the uninterrupted and smooth 8v DC supply. The whole process of converting 220v AC into low voltage DC, has been explained in this article: Cell Phone Charger Circuit

The second part of the emergency light circuit consist the main functionality, that is to automatically switch ON the emergency light (Array of white LEDs) on Power Failure. We have used Relay here to automate this. A 6v, 4.5Ah rechargeable battery is connected to the Array of LEDs, through a Relay. Normally when there is no power failure, the coil of Relay remains energised and lever is attracted towards the NO (normally open) terminal and NC (normally connected) terminal remains open. In this situation LEDs are disconnected from the rechargeable battery and remains OFF, also battery is getting charge through the power supply from the transformer. A diode D5 is used to prevent the battery from flowing back.

Now when the power fails, relay coil become de-energized and lever gets connected to NC terminal, which connects the LEDs to the rechargeable battery, and LEDs array goes ON. This is how this emergency light works. Now when the power is restored back, relay gets activated and lever again connects to NO terminal which in turn disconnects the LEDs from the battery and connects battery to the transformer for charging. 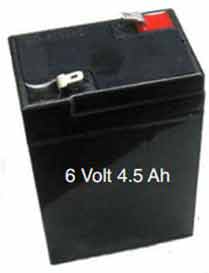 Generally 6v, 4.5Ah rechargeable battery comes with Deep discharge recovery and overcharge protection mechanism, but we can use zener diode of 6.8v to protect the battery from overcharging. We can also use other rechargeable batteries like Nickel-cadmium battery (NiCad), Nickel–metal hydride battery, cell phone batteries etc. Further we can also use PNP transistor BD140 in place of Relay. PNP transistor can be used here as a switch, like it will be OFF when continuously voltage is applied to base of it, in case when power is there and it will be ON, in case of power failure which connects the LEDs to the rechargeable battery, and activates the LED emergency light.

This emergency light can also be made using LDR (light dependent resistor), in which light will automatically switch ON according to darkness, means it remains switch OFF in presence of light and switch ON in absence of light.

Projects are very nice. these are practically applicable for human society..

Thanks for the diagram on how a cell phone charger circuit works. A friend of mine likes to make things like this out of spare parts around our house. We haven't been able to figure out how he does it, but it works every time. Thanks for sharing!

Nice.i want to learn this circuit but i don't know how to i learn it.thanks

i want a help

Sir,
I have a 21 LED rechargeable lamp.but now the battery didn't holds the charge.
How can i work it with out using the battery,by giving ac current continuously..
PLEASE HELP ME

Sir,
Can you give me a circuit of a reachargeable emergency light with battery status indicator using red and green led with a ldr and scr using 6v battery

Sir,
could you use 3 AAA rechargeable batteries in series instead of the 6v that you used for this project?

You can use 4 AA batteries.

You can use 4 AA rechargeable batteries.

Thanks u a lot for all that useful informatios keep it
Anyway I went to buy transistor bc 547 but instead the guy gave me C 9014, after that he convinced me with an excuse of the bc series has been eliminated from the system by substituting it with c series
Any further explanation

You can use C9014 here but BC series is not eliminated.

A Very Good project for

A Very Good project for student

Nice design!!! but pls suggest if i want to add more leds for extra brightness or an alternate led of high wattage ahould i chnage the ic or the battery capacity ..and what should be done to make the leds glow during the prescence of ac mains....help pls

Yes you may need bigger

i like it ...i love it this site is very very exited for all people and students .....

just one question how and whr

just one question how and whr to put LDR thr ? thank u

what is the use of that circuit, u can connect directly from the power source

I think it is because of the

I think it is because of the continues collector current rating (Ic). You can use any suitable transistor it should not be a problem