The Great American Businessman and Inventor of light bulb – Thomas Alva Edison once said that “We will make electricity so cheap that only the rich will burn candles”, which certainly has become the case today. From small house to paved roads to big industries, we can notice AC lights illuminating our environment after the sun goes down. Earlier lighting systems employed different kind of bulbs like incandescent light bulbs, Compact Fluorescent Light bulbs (CFL) etc, but today with the advancements in LED light technology these Incandescent and CFL bulbs are quickly being replaced by LED lights. The global LED lighting market has seen a prolonged growth with a size valued at USD 45.57 billion in 2018.

While it is known that LED lights are almost 90% efficient than incandescent bulbs and has a better lifetime than other AC bulbs, it still suffers from one setback. That is, LED lights are driven by DC voltage, but all our mains power supply is AC. This has pushed designers to use an additional component called LED driver which is nothing but a type of AC to DC converter. This driver will convert the AC power from mains to a suitable DC voltage to power the LED light. But, then the AC driverless LED bulbs were introduced which can be directly plugged into AC mains without any external driver modules. In this article we will learn more about Driverless LED systems and its evolution over time.

The major problem with the traditional high power AC to DC switching LED drivers is the power loss associated with it. These traditional AC LED drivers use switching topologies and resistors to control the LED current, this switching causes heat which reduces the efficiency of the system. Also this additional circuitry leads to the increase in overall cost of the Light bulb. This is why in our previous article we discussed about a low-cost LED driver system and even built one to test its performance.

Another terrific problem of the AC LED drivers is the flickering effect. As most of us have noticed the old LED driver circuits have a flickering effect. In maximum cases, these traditional AC LED driver circuits use half-sine wave at twice the frequency of the power line. That means, in a 50 Hz frequency power line, it produces almost 100 flicks that can be detected by the human eyes and it is harmful. This should be eliminated. So, modern technology is introduced which uses few passive components instead of the traditional AC to DC converter using switching topologies.

An AC LED light engine is a mechanical fixture or a circuit board that has LED chips mounted in it with all electrical connections. It is a readymade form of light source that can be easily fixed into an AC socket. It helps the LED bulbs to act as a direct substitute for other conventional lamps.

The development of this AC LED has several stages. It started by simply connecting standard LEDs in series to match the combined forward voltage of the LEDs with the maximum AC input voltage. It sounds like a good idea to light up those LEDs without any driver, but it was not successful. This design has a major drawback, AC changes its polarity from positive to negative for every cycle and due to this, on every positive cycle the LEDs are forward biased (turned on) but in every negative cycle, the LEDs are getting reverse biased which makes them turn off.

So what is the solution? At this time, the first generation of driverless AC LED lights was introduced in which each segment of the LEDs is replaced with an anti-parallel pair, just like the below image.

In the above image, LEDs are connected in an anti-parallel way. In every positive cycle, one side of the pairs is forward biased and the other side is reverse biased but in the negative cycle, the states get changed and the other LEDs lit up. The current here is limited by a single high power resistor R1.

The positive side of the circuit is the efficiency. The efficiency is very high. The in-phase current and voltage waveform passing through the circuit creates a high power factor. But, despite the above mentioned positive side, the first generation of the driverless LED light engine is a failure. It is because of the poor Flicker index and the double number of LEDs than required. It produces a flash effect which is easily detectable by the human eyes and half of the used LEDs remain off in any given times.

From this drawback, the Second generation driverless AC LED engines are developed. This time the goal is to lower the LED counts. It is only possible if the AC is transformed into DC. Therefore, a bridge rectifier diode is included in the second generation driverless AC LED light engines. Other than the rectifier diodes, everything in the circuit is unchanged.

Like before the resistor R1 is controlling the LED current. Now each both negative and positive cycle are passing through the LEDs making them to remain turned on during both cycles.

The third generation of AC LED engines is introduced to increase the efficiency and to get an enhanced flicker index. Switching controller is added in the circuit which can individually control the LEDs to a certain level where the power line voltage is the same as the LED voltage. The current limit function is also available in the integrated switching controller and that can be reconfigured using external components. Such a circuit could provide almost 80% of efficiency and .30 to 0.35 flicker index. 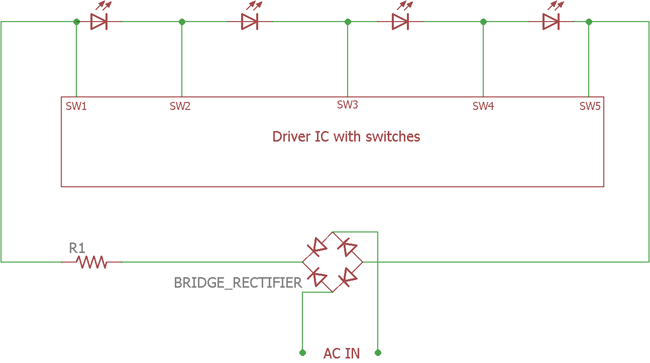 In 4th generation driverless AC LED engines, the controller is eliminated and passive components are used to compensate with the manufacturing cost. Also, the efficiency is superior with a high power factor and enhanced flicker index. 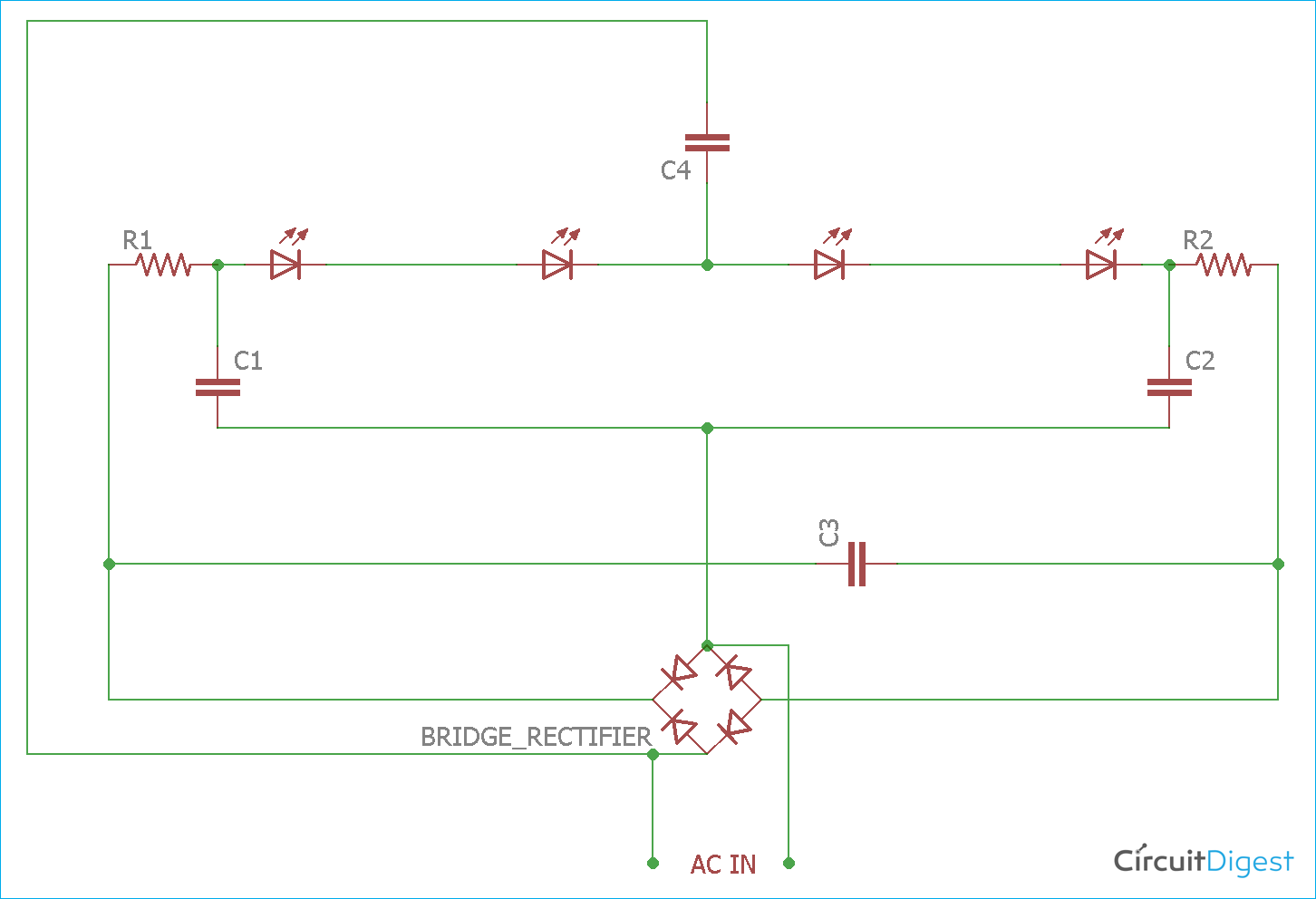 The input waveform of the LEDs and the input AC Voltage can be seen in the below image. 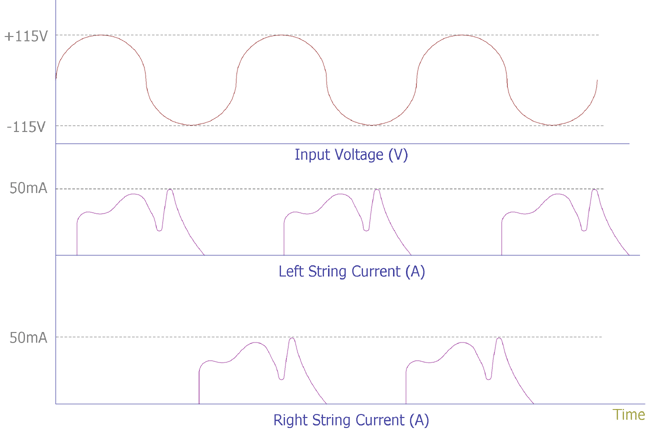 1. These driverless LED lights are easier to manufacture. The cost is reduced and requires very low maintenance.

3. With the LED driver removed, it enables reshaping feature. LED products can be made in different shapes and sizes.

4. Easy and quick installation is another great feature of driverless AC LED lights.

What will be the value of R1,

What will be the value of R1, R2, C1, C2, C3, C4 for this driverless LED lights circuit for 25 LEDs or how to calculate the value of these components?

What is the calculations or…