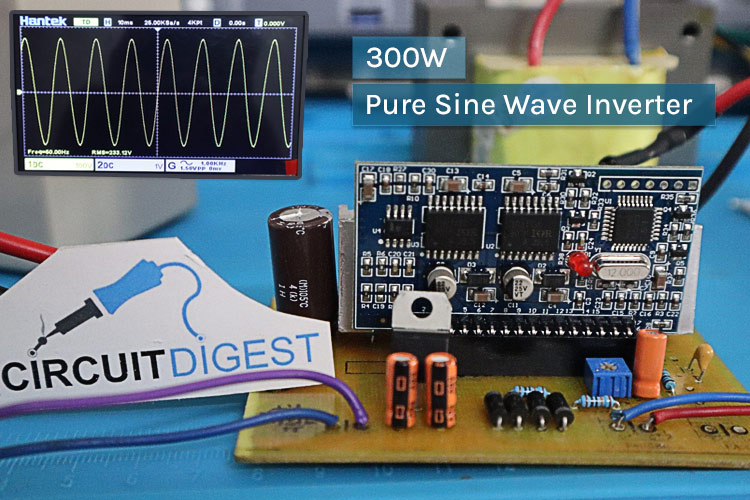 So, in this project, we are going to build a pure sine wave inverter with a rating of 300W or 800VA. Let’s look at the components needed for this project.

The complete circuit diagram for the Pure Sine Wave inverter is given below. 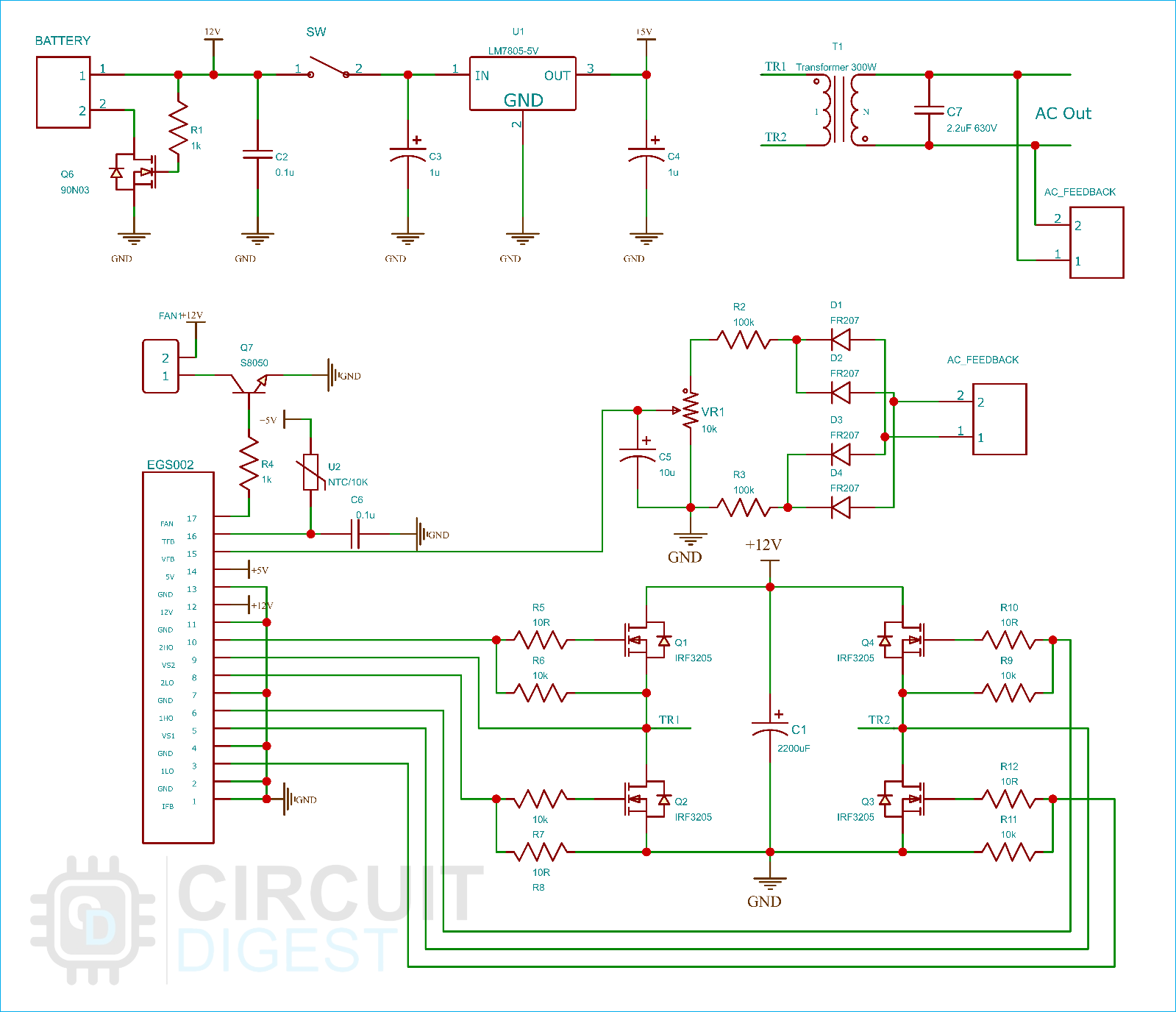 Now let’s have a look at each section.

The power section consists of reverse polarity protection based on an N Channel MOSFET and an LM7805 voltage regulator along with some filter capacitors. The input from the battery is connected to the power input and then the positive is directly connected to a switch and the H-bridge. The negative is connected through an N Channel MOSFET for reverse polarity protection. LM7805 generates the necessary 5V for the EGS002 Module. 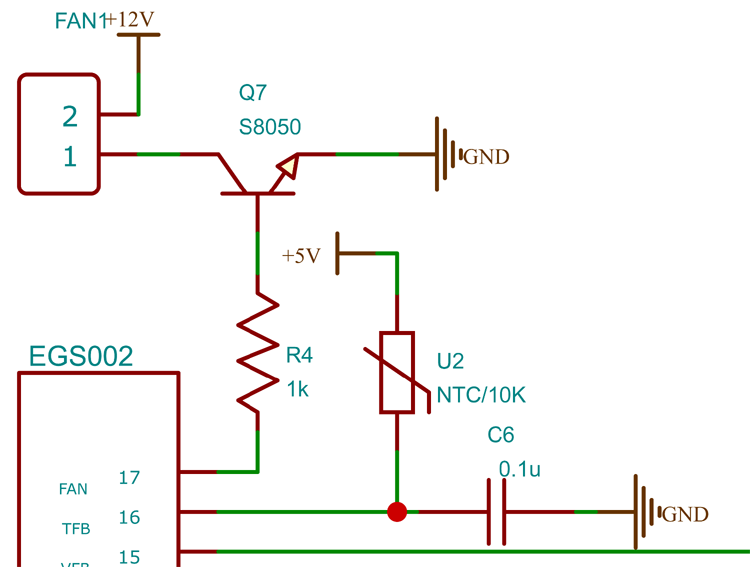 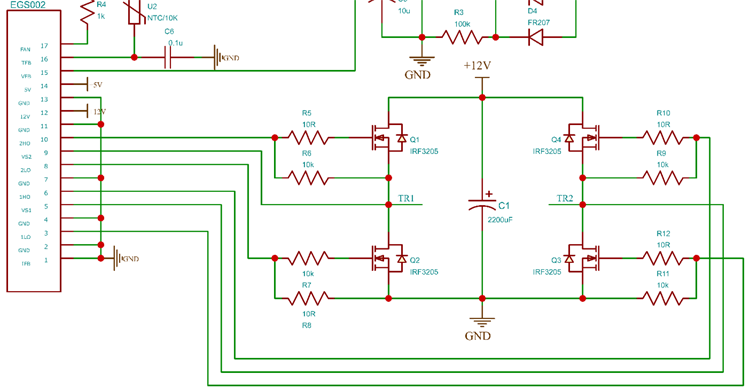 The feedback circuit consists of a bridge rectifier and a voltage divider. The variable resistor VR1 is used to adjust the output voltage by adjusting the feedback voltage. The AC voltage from the transformer is connected to the input of the bridge rectifier and the step-down voltage is connected to the VFB pin of the EGS002 module. The module will adjust the SPWM duty cycle with respect to this feedback voltage, to keep the output voltage stable. 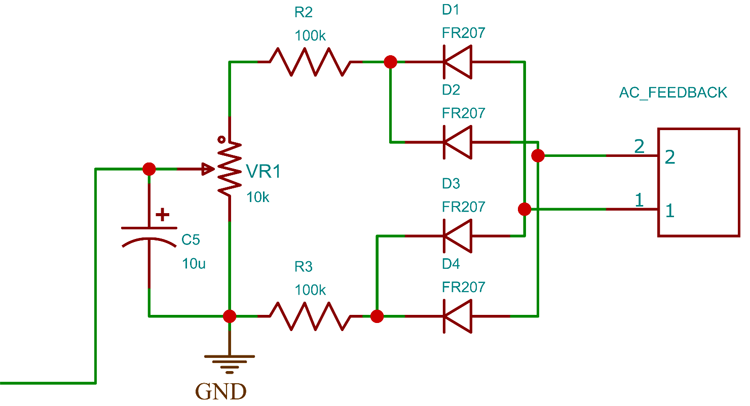 The transformer is connected to the H-Bridge at TR1 and TR2 points. In the output, a 2.2uF 650V capacitor is connected to filter out any high-frequency component from the SPWM. This filtered output is then connected to load and a feedback line of the EGS002. 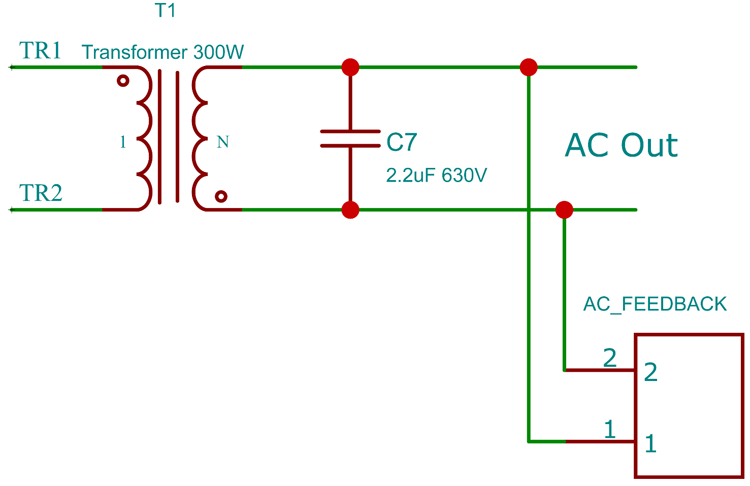 You can either build this project in a perfboard or you can make a PCB with the files from the link at the bottom of the page. Both PDF files for the toner transfer method and the Gerber file for the manufacturing are included. Here is the PCB layout for the inverter. 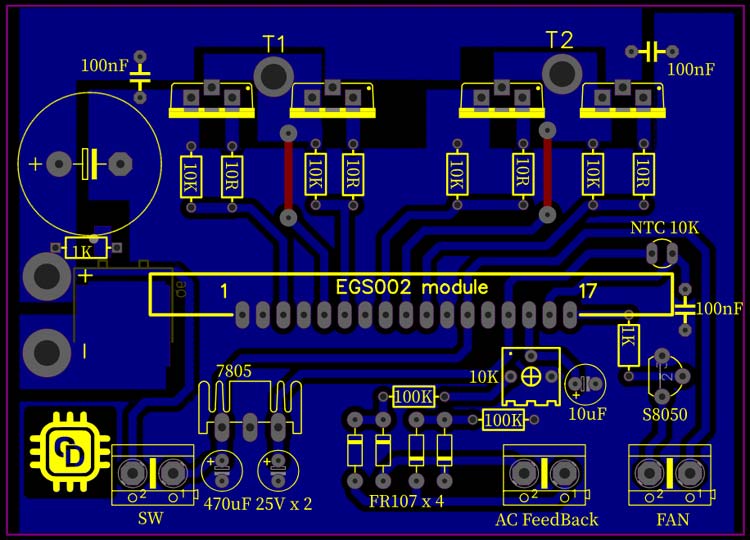 And here is the PCV view for the same. 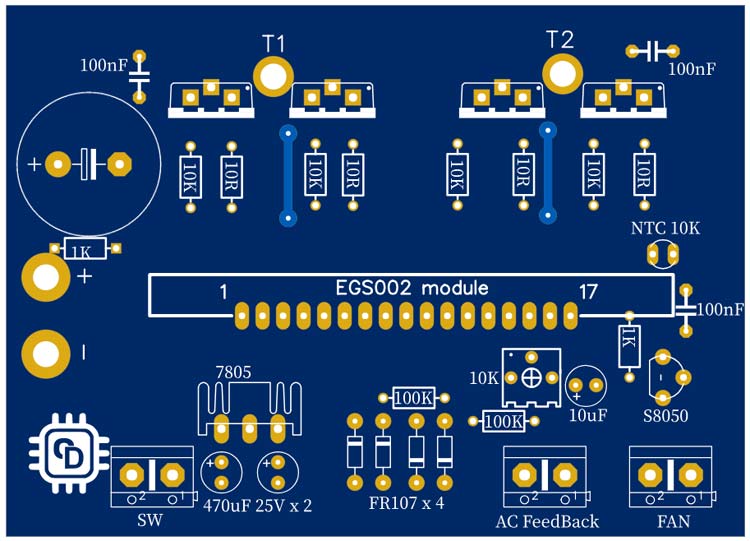 Once you made the circuit with all appropriate connections, connect the battery and turn on the switch. If the inverter turns off after a few seconds with the LED on the EGS002 blinking three times, it is because the output voltage is not calibrated. Connect the output to a TrueRMS multimeter and adjust the variable resistor till the output voltage is set correctly. 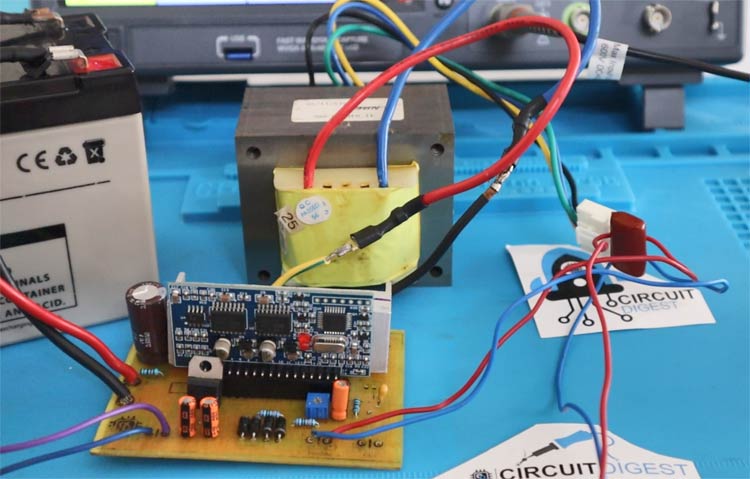 Here is the PCB I have made, and the components used. You can see that the number of components is the bare minimum. The input is given through a high gauge wirer to reduce the voltage drop due to the resistance of the conductor. A tank capacitor of 2200uf is added to the input. The 5V for the EGS002 module is generated using the LM7805 voltage regulator and the filter capacitors. As already mentioned, the AC feedback circuit consists of a bridge diode made of four FR207 diodes, a voltage divider made of two 100KOhms resistors and a 10KOhms pre-set and a filter capacitor of value 10uF. 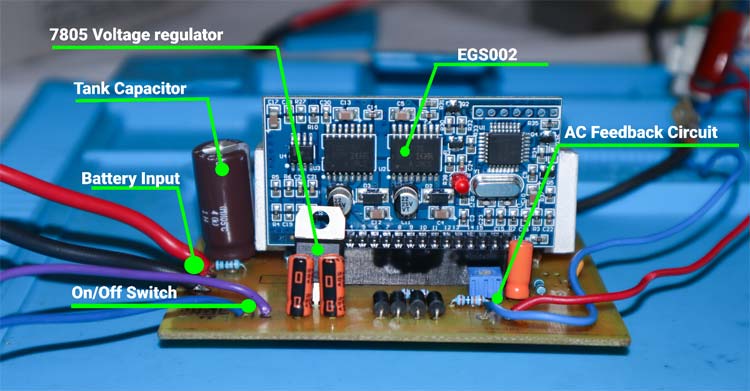 Here is the H-bridge circuit made of four N channel MOSFETs. You can use IRF3025 or any compatible ones for the H-Bridge circuit. 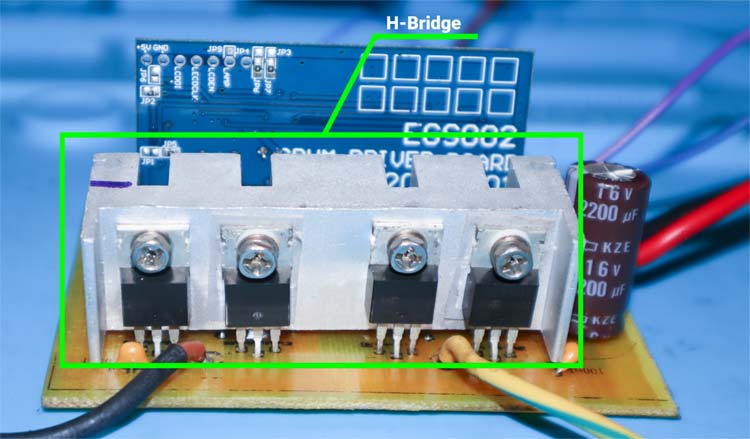 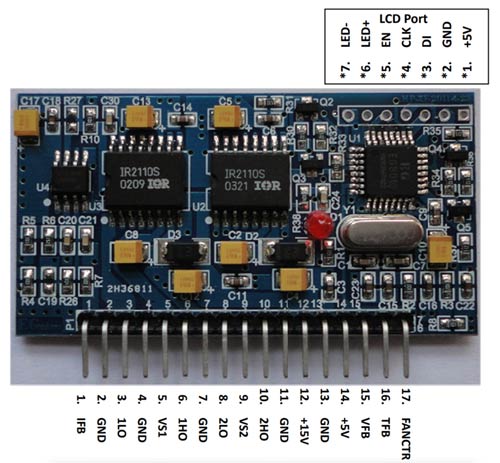 EGS002 is a driver board, designed for single-phase sinusoid inverters. It uses ASIC EG8010 as the control chip and IR2110S as the MOSFET driver chip. The driver board integrates functions of voltage, current and temperature protection, LED warning indication, and fan control. We can use jumpers to configure the following settings, Output frequency (50/60Hz), soft start mode, and dead time.

Here is the pin description table for the EGS002 module- 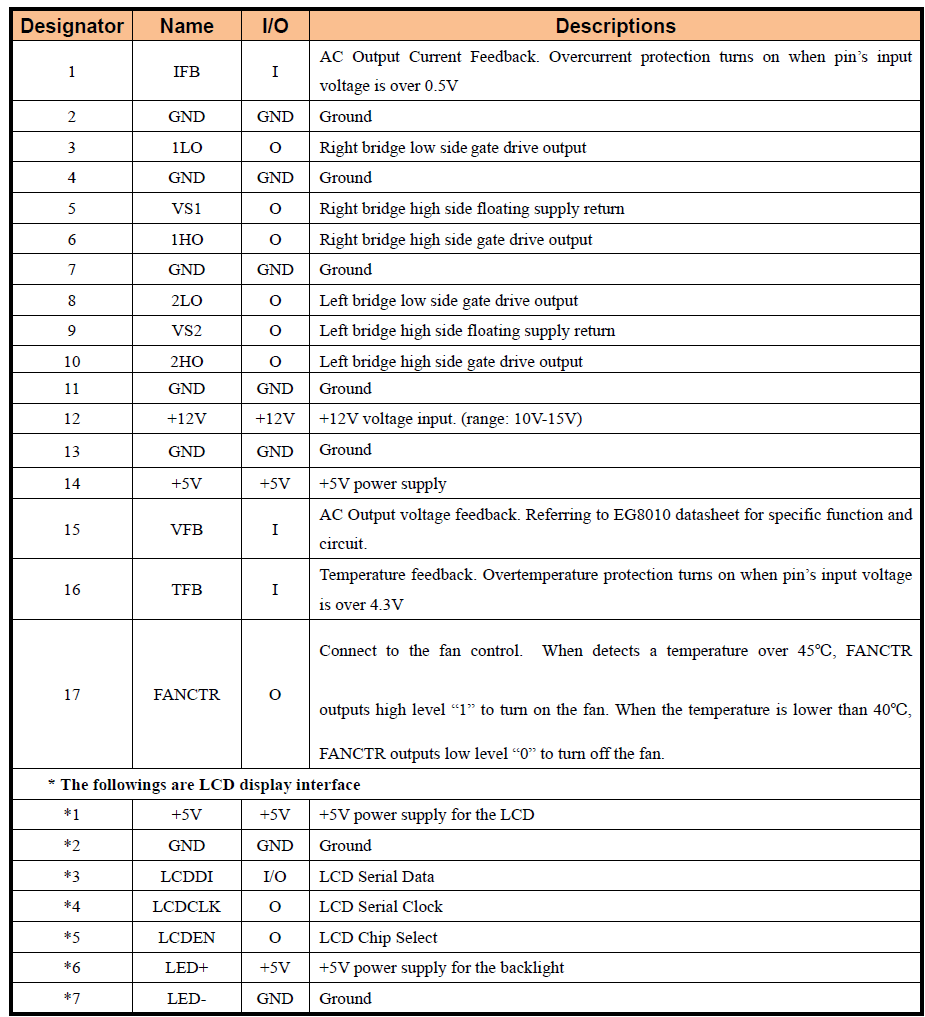 As already mentioned, the EGS002 can be configured with the onboard jumpers. Let’s take a look at those. The following table shows the function of each of these jumpers.

Overcurrent: Blink twice, off for 2 seconds, and keep cycling

Overvoltage: Blink 3 times, off for 2 seconds, and keep cycling

Undervoltage: Blink 4 times, off for 2 seconds, and keep cycling

Overtemperature: Blink 5 times, off for 2 seconds, and keep cycling

The below gif shows the working of the pure sine wave inverter. The GIF showcases the soft start of the inverter.

Here is the waveform view of the inverter output. 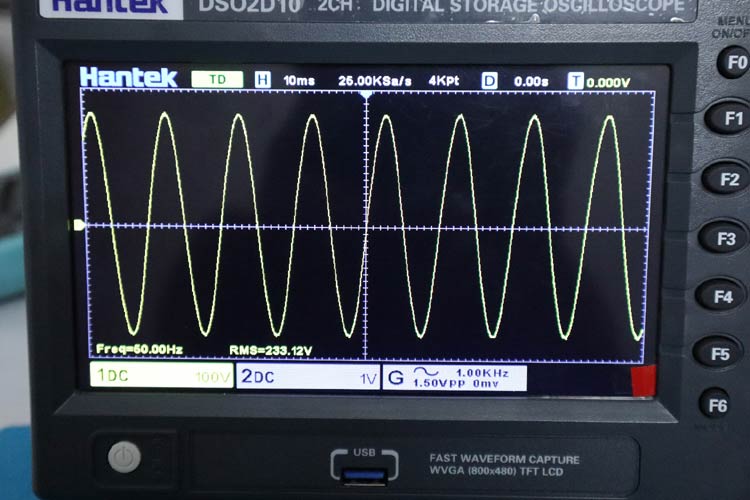 You can increase the inverter power by adding more MOSFETs and changing the transformer. All the files necessary to build this project can be found in the following GitHub repo.

Hi Jobit, I am very much…

I am very much interested in learning and building the 300W Pure Sine Wave Inverter. Regarding the components list is there a way to specify how many components are needed. Example how many IRF 3205N Channel MOSFET’s how many 90N03 N Channel MOSFET, so on is it possible to provide the info to make it easier to organize The and order BOM (Bill of Materials) also if you have the schematics in a Gerber file if we decided to order a professionally made PCB

Dear AVI Khalid, you can…

Dear AVI Khalid, you can find all the required files, including the Gerber file and the BOM in the following GitHub repo. https://github.com/Circuit-Digest/Pure-Sinewave-Inverter

I am sorry I didn't include my email avichalid@aol.com

Dear jobit Thank you the…

Sir its found quite…

Sir its found quite Interesting.

I'm a VLE seek economical solutions to the power needs.

hello sir, where did you put…

hello sir, where did you put the n channel 90n03 mosfet?

What should be the…

What should be the specification of the transformer used I.e the current rating

Please reply what should be…

I am very much interested in learning and building the 300W Pure Sine Wave Inverter. Can I get a detailed video on how you did yours please

I am very much interested in learning and building the 300W Pure Sine Wave Inverter. Can I get a detailed video on how you did yours please

Thanks for sharing the…

Thanks for sharing the EGS002 inverter project by Jobin Joseph. Unfortunately however, my circuit is cutting off indicating undervoltage when loaded with a 20W device. The source voltage drops to about 10.5V

I am testing a double conversion UPS inverter and so have a rectifier connected to the mains as a source for now. The Lion batteries had the same issue also.

I am supplying the inverter with 21V, have a feedback circuit, and have used precisely the exact components on the xls file together with the Gerber.

Please kindly assist on what could be the issue. Hope to here from you soon.

Please suggest me any…

Please suggest me any alternative of 90N03 N Channel MOSFET