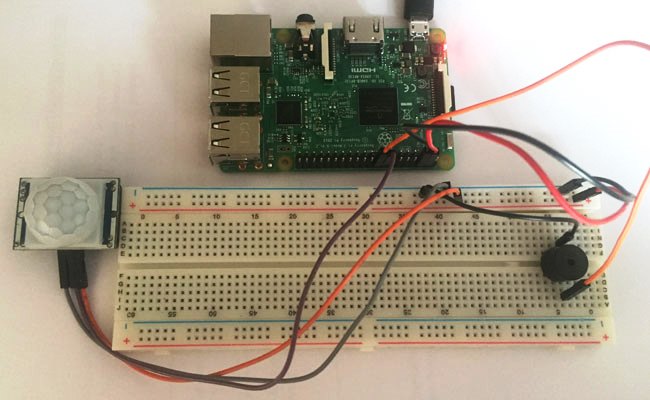 Security systems play an important role in our day to day lives and there we can find a lot of different types of security systems with different kinds of technologies and with different price range. Being an electronic enthusiastic you can make a simple security system by spending few bucks and some spare time.  Here in this article I am sharing a DIY guide to make a simple Raspberry pi and PIR sensor based motion detector alarm which will turn on the buzzer when the PIR sensor detects any human movement in the area. We also covered a simple PIR sensor based motion detector circuit in one of our previous articles where we covered the working of PIR sensor in detail.

The Python code for this raspberry pi and PIR sensor based motion detector is quite simple and could be understood easily with the comments inline in the code section below. I declared the GPIO pin 23 and 24 as input and output pins.

A ‘while’ loop is used as ‘True’ so the contents inside the loop will always execute. if GPIO.input(23): statement detects if GPIO pin 23 is high, and if the same is true it makes the output PIN 24 high. The function time.sleep(secs) is used to pause the program in python for particular time where ‘secs’ is the time in seconds. So here we used to pause it for 1 second. In the next line we made the output on 24 as false so buzzer stops until the loop begins the next iteration, as While loop is set always true without any pre-condition.

hi. i wanna ask. how do you connect the jumpwire to the breadboard? based on above article, you just show the circuit of raspberry pi only. or the breadboard can be pin to any place ? i just wondering. i try to do this but the buzzer didnt give a beep sound. please help me

You just have to make the

i have tried many different approaches to this but no matter what i try it wont work out. i would be much obliged if you could run me up with reference material. you know it better than me im sure

Error in first line of code?

What does that mean? Is there code that needs to go in before the first line?