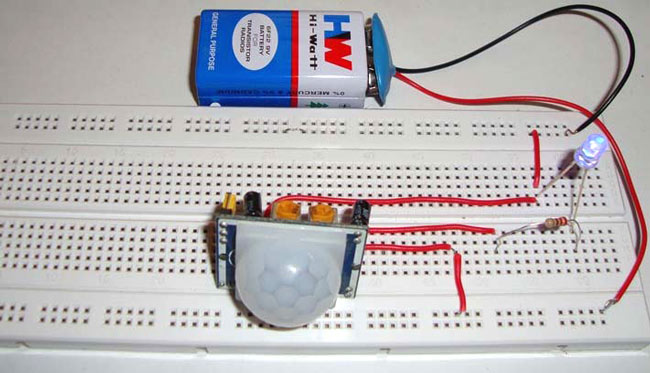 What is the range of a PIR

What is the range of a PIR sensor?

plz rply me soon as possible

I am not getting you, this

I am not getting you, this circuit is already working as per your need. The LED/alarm gets only activated in human presence.

he is right, bcoz its

he is right, bcoz its activate on human motion capture, if there is a no movement and also person is present but not moving.then its get off after sated time

I wish to understand, can

I wish to understand, can this circuit not be used in a room? What I mean is, in a room, you may have other things that generate heat light fan, refrigerator, TV set and you can also have an Air conditioner.

In such a situation, can the system work very well? Or should it be limited to work only on passage ways and stair case?

Use 4017. check this link- https://circuitdigest.com/electronic-circuits/remote-controlled-light-switch
use PIR sensors out as a clock pulse on 14 no pin of 4017... set minimum delay time on PIR timer. set it on your washroom's door. and it will be working. check it bro

sir..can you make it turn off

how to make,when pir detect motion then all alarm should ring continouse till we switch off and on pir circuit.

it is because the pir ring buzzer for very short period.

Read the working of PIR

Read the working of PIR sensor carefully, you can increase the Period by using the Time delay control knob.

sir, In my PIR sensor the output pin always goes high even if there is no motion detected, I even tuned the sensitivity and delay,but i cant, plz help me !.........

I want that when my sensor detects it turns on the alarm and alarm should remain on till alarm 3-4 minutes.

You can set the time delay

sir,
we are facing color wire interchanging problem in our process, we need correct color presence or not identification by using simple circuit,it is possible pls send me quote to my email id along with project details at soon.

SIr plz tell me the price of PIR sensor, And Where I purchase it.

simly go to amazon site then searh select and by

want ans of my ques

what will hppn if some small creature or animal in front of a sensor ???

sir ...this circuit also good
but this is only active when human actions there's no actions or movement no response
sir..I requesting u
I want a circuit that active when human entered and deactivate if human absense
plz rply me soon as possible

motion sensor turns the light on if there is human action...but does not when human present in the room but without any movement...how to solve this issue ..how to write code for this ..??
please reply as soon as possible..

can i use pcb for this

can i use pcb for this circuit

can it be connected to the fence

Yes it is possible with some modifications in the circuit

You can use the output pin of the sensor to drive any load you want. The load might be Light Alaram ar anything that you desire. But you should design apprpriate driver circuit for it.

Need your help on below , i had a small water fountain which run with (1) MINI WATER PUMP DC 3V-9V and (2) 9v Bettery , i would like to add per motion to it , i tried but the motor is running , could you please help me how can i do that ,(i have zero knowledge with apprpriate driver circuit for)

Advance thank you for your help

Can we increse its range??

if i have to use more than 1

if i have to use more than 1 PIR sensor in my circuit can i draw 5 v power for each using only 1 5v power pin on arduino .

Need Circuit of this PIR sensor.

I need Complete Block circuit of This PIR sensor . can you please share that with me .

can someone provide me with a circuit for making a PIR sensor for human detection?

Please how can I incorporate a delay system to this PIR so that it doesn't come on immediately it senses the motion. I want a system that will have a delay of 30seconds before the PIR triggers the LED to be HIGH?

You have to create a Delay

You have to create a Delay circuit using 555 Timer

I want check message get my phone when detect the pir motion sensor , Then it is possible for this feature, please send me reply quickly

I got educated about PIRs

As with your other articles, this one is also very informative. I have always been foxed about both the presets, but this cleared them up for me. Also, I didn't know there was a non-retriggerable option.

Thanks for sharing. Please do keep contributing.

Jayant, is there a way to increase the sensitivity on these PIR modules?