The Hex Calculator is used to perform addition, subtraction, multiplication and division on two hexadecimal numbers.

What is a hexadecimal number?

A hexadecimal number is a number expressed in the hexadecimal positional numeral system with a base of 16, which uses sixteen symbols: the numbers from 0 to 9 and letters A, B, C, D, E, F. Where A, B, C, D, E and F are single bit representations of decimal value 10 to 15. Hexadecimal uses a four-bit binary coding. This means that each digit in hexadecimal is the same as four digits in binary. Octal uses a three-bit binary system.

Adding Hexadecimal number is same as decimal addition. The only difference is the added numerals A, B, C, D, E, and F. It may be convenient to transform the hex numbers to decimal system when the values greater than the number 9. Below is an example of hex addition.

Hex subtraction can be calculated in the same way as decimal subtraction but the big difference is when borrowing in hex, the "1" that is borrowed represents 16decimal rather than 10decimal. This is because the column that is being borrowed from is 16 times larger in hex than 10 in decimal. Below is an example of hex subtraction.

Multiplication steps for each number is shown below 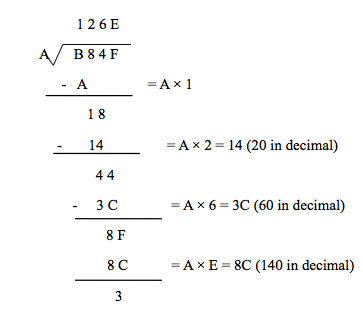