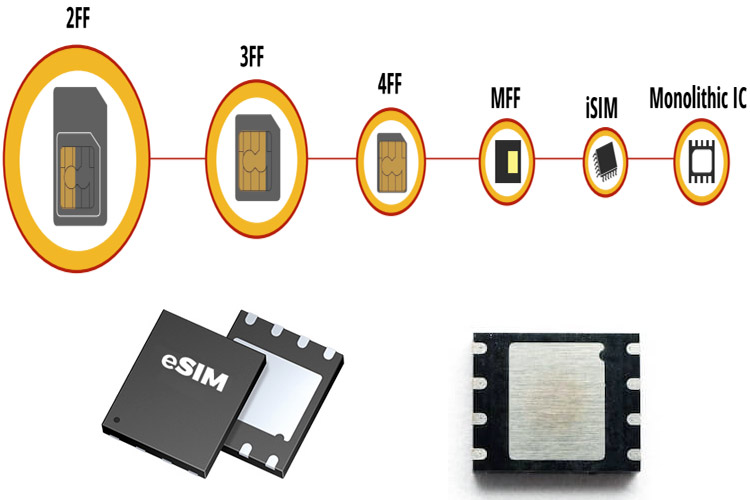 Selecting the right communication medium is usually a very challenging part of the development of any IoT solution. In situations where range beyond that of Wi-Fi and Bluetooth is required, options are usually between the LPWAN technologies like LoRa, Sigfox, etc. but while these technologies come with Pro-IoT features like low power and long-range, they are saddled with infrastructure and coverage challenges that push developers towards cellular (2G, 3G, 4G, etc.) based communication especially in applications where power is not much of a worry.

However, in line with the whip rat nature of communication protocols and IoT, while cellular IoT has the proven infrastructure and coverage to support global deployment, it is incredibly difficult to manage at scale because of several factors including the SIM Card requirements and the challenges surrounding it.

Partly as a solution to this and similar issues with Smartphones and other consumer electronics devices, GSMA (the cellular communication consortium) in 2010 started exploring the possibility of software-based SIM cards. In 2016, the consortium announced the technical specification for the technology called eSIM, which eradicates the need for a physical SIM card in consumer devices, and since then, adoption has grown with several manufacturers like an ARM with its new embedded SIM called ARM eSIM and other consumer device giants like Apple embedding it in different products. 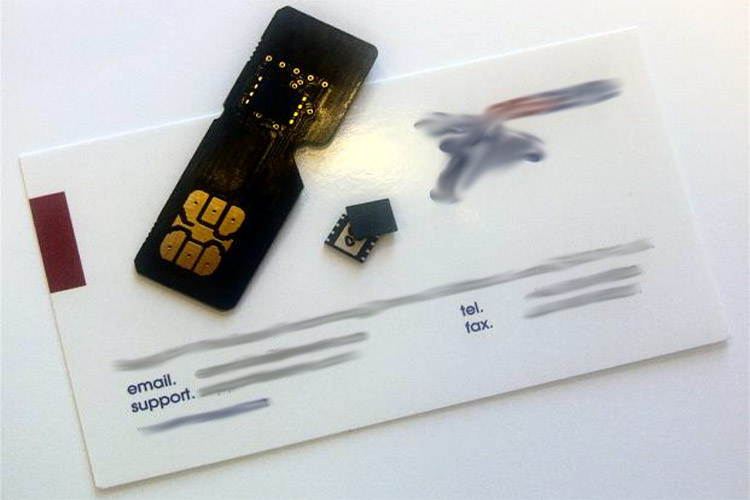 For today’s article, we will examine this technology in relation to IoT. We will go over its features, its current state, and potential impact on IoT.

What is an eSIM

Unlike the regular SIM card, eSIMs are Software re-programmable. This means you can change the entire contents of the SIM, including the international mobile subscriber identity (IMSI) and network carrier profiles, via software over the air, eradicating the need to swap SIM cards.

A common misconception is that eSIM refers only to embedded SIM hardware like the MFF2 SIM card shown below, but it also refers to, howbeit less popular, removable plastic SIM cards like the 4FF form factor SIMs, on which an Embedded UICC software can also be deployed.​

How does eSIM work?

A basic explanation of how eSIMs work is that the SIMs are deployed along with the device and the user/manufacturer is provided with an interface through which they can remotely add, update, extend or delete multiple network operators

During the manufacturing or deployment process, the manufacturer or vendor (MNO, M2M Device, or Consumer electronics manufacturer, etc.) of the eUICC registers the SIMs with the SM-SR, which then maintains a secure connection with the eUICC to manage subscriptions. Through the SM-SR, the eUICC can be reached with commands from the vendor or SM-DP, which is responsible for formating the profiles of MNOs into a format that is compatible with the eUICC. 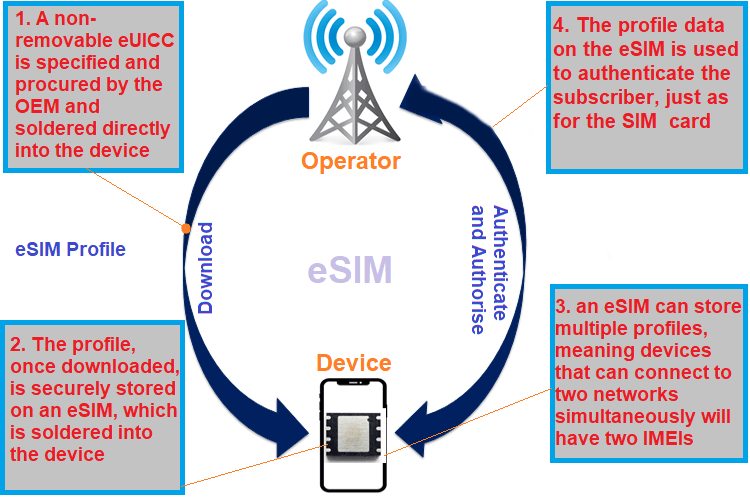 To activate an MNO on the eUICC, a command, initiated one way (typically via barcode scanning) or the other by the user, is sent by the MNO to the SM-DP, which processes the command and downloads the MNO profile to the eUICC, while also providing an interface that allows the MNO to enables/disables a profile.

There was some level of debate on the applications of eSIMs in the early days with organizations like Motorola believing it was geared towards M2M industrial applications while organizations like Apple believed there was no reason why it shouldn’t feature in consumer products. Presumably, as a result of this, to create something that suits both applications, the consortium (GSMA) approved two architectures for eSIMs;

While both architectures support the reprogrammable features of eSIMs, the approach to realizing it (among other things) is different in both stacks. For the Consumer electronics architecture, a client-controlled model is implemented, such that, the end-user of the device has control over remote network provisioning and management of operator profiles. For the M2M architecture, however, a server-controlled model that allows remote provisioning and management of mobile network operators from a backend infrastructure/Central server is implemented. This makes sense as human interaction on the M2M level is reduced and the remote upgrades and changes are the key features that fit IoT use cases. 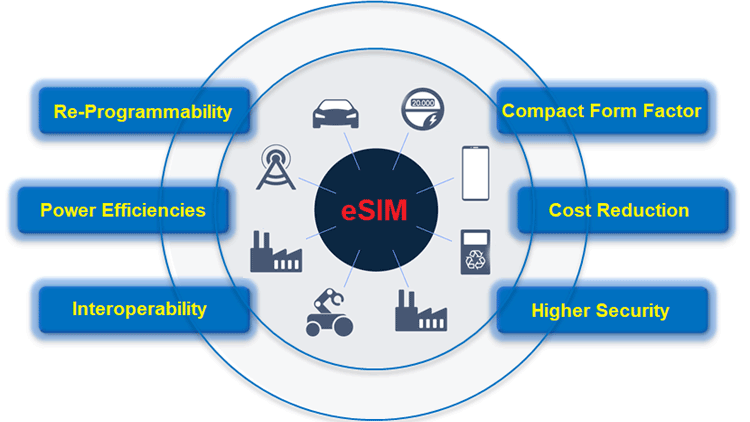 Most people will definitely agree that the most appealing feature of eSIMs is the flexibility with which it allows users to switch between MNOs without having to change physical hardware, thanks to its over-the-air re-programmability, and its ability to navigate multiple profiles from different operators on the same device. This, however, translates into several other features that affect (positively, I believe) the device in a number of ways. Some of these features include;

From the cost of the hardware like the SIM Tray and its supporting circuits to the cost of the SIMs themselves among others, the classical SIM Cards present a total cost that of ownership that is far greater than eSIMs.

All accredited partners in the GSMA ecosystem are expected to comply with the released standards and architecture, thus ensuring interoperability.

The shape, size, and need for an opening are requirements of classical SIM Cards that influences the form factor of the device in which they are used. With the chip-like nature of eSIMs, about half the size of Nano SIMs and don’t require a socket, designers will have more flexibility with the size and form factor of devices.

Even though they implement cellular communication which is not very power-friendly, eSiMs operate on less power compared to the Classical SIM Cards.

One other obvious feature of eSIMs is their physical security. Having the chip embedded in the device makes it nearly impossible to tamper with or remove for misuse. Asides this, a comprehensive security accreditation scheme (SAS) is shipped along with the eSIM framework.

Potential Impact of eSIM on IoT

While eSIMs are going to revolutionize everything about the telecommunication industry from operations to service rendering, it will also have a significant impact on IoT.

There are three main areas of cellular IoT that can be potentially impacted  by eSIMs;

This is probably the biggest problem with cellular IoT via classical SIM Cards. While the coverage via cellular connectivity, in general, is vast, the quality of coverage by each MNO differs from location to location. For this reason, to fully leverage the connectivity features of Cellular communications, users have to go through the difficult and operationally intensive tasks of switching between SIM cards which puts a limitation on IoT solutions. However, with eSIMs, IoT solution providers can switch device profiles quickly and securely Over-the-air or even automate the process, so connectivity changes can be implemented based on criteria like signal strength, tariffs, etc.

Deploying Cellular IoT across multiple devices can be quite the hassle as sim managements could get really complex quite fast as the number of devices increases. With the flexibility interoperability offered by eSIMs, this can be better managed.

Using a single SIM from the network provider with the largest coverage or Physically swapping SIM cards for improved coverage, introduces reliability challenges. The provider with the largest coverage area may not have coverage in your deployment location, and sim cards get damaged or fail during the swapping process. With eSIMs and Over-the-air “SIM swaps” the system becomes more reliable and durable as the mechanical design considerations for the device are simplified.

Applications and Use cases for eSIM

While the impact of eSIMs is expected across every IoT application area, some sectors are expected to be huge beneficiaries. Some of these sectors include-

With the “connected car” Paradigm rapidly becoming mainstream, eSIMs have the potential to provide the seamless in-car Connectivity needed to allow users to enjoy all the features of the vehicles. Asides for connectivity, quick OTA updates could also potentially revolutionize how ownership transfer is implemented.

While most agriculture-related applications employ LPWAN protocols like LoRa, a connectivity backhaul like Cellular connectivity is often still required to get the data to the device cloud. Due to the location of most farms, the signal strength of MNOs may vary. With eSIMs, farmers can switch between MNOs without hassles.

3. Object Tracking
Sensors that track and monitor the conditions of different moving objects like cars, trucks, shipments, etc. can be made smaller have longer battery life, and unlimited coverage area (Switching between multiple MNOs), thanks to eSIMs.

Technically, every single IoT application that is better implemented with cellular IoT will experience performance increase, thanks to eSIMs.

Like every new technology, adaptations of the eSIM technology are gradually coming to life with the most recent ones being iSIM.

iSIM (meaning Integrated SIM) is a  technology built on the functionalities of eSIMs. While eSIMs are usually just a dedicated chip which still requires to be connected to the device’s processor, the iSIM combines the processor core and the eSIM features into a single system-on-chip (SoC) unit.

It was developed with the goal of further reducing the footprint of SIMs, as by integrating it into the processor, the device can become even smaller, and cheaper, thanks to the reduction in BOM.

Even though the technology is still at its early stages, iSIM definitely seems to be the future for most applications, and several chip manufacturers, including Qualcomm, are already jumping on it with the recent release of Qualcomm® Snapdragon™ 855 SOC.

While there is still tons of work to do for eSIMs to become mainstream, it has the potential to build the bridge that allows IoT solutions to fully leverage the massive coverage of cellular networks. With 5G Networks in the works, and the slow rate with which different providers might attain maximum coverage across different cities, eSIMs will definitely come in handy in ensuring IoT solutions leverages unreservedly on the speed, it is poised to bring. Asides improving connectivity, eSIMs will also introduce new business models that will contribute to how the development of IoT solutions is approached.