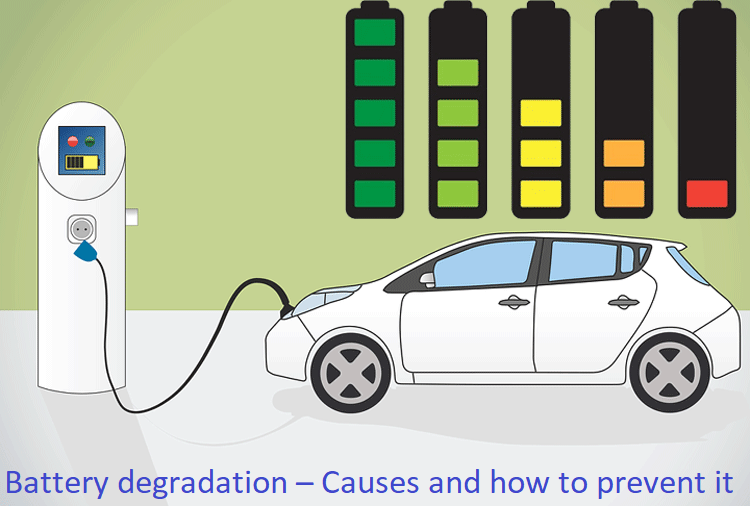 Along with range anxiety and lack of charging infrastructure, battery degradation is also one of the main hurdles in making Electric Vehicles feasible for the masses. Different types of Lithium batteries have different life cycles depending on their chemistries, normally it would be somewhere between a few hundred to a few thousand. Over this charge cycle due to aging, batteries lose its original, meaning the vehicle won’t give as much range as compared to its initial performance on a single charge. This measure of loss in capacity of Battery is called Battery Degradation. If we want to have the optimum performance of the batteries throughout their life cycles we need to take proper measures in battery operation and storing. In this article let us discuss what causes battery degradation in EVs and how it can be prevented. You may also read this Electric Vehicle Batteries article if you want to learn more about EV batteries and how they are used in EVs.

What are the reasons for battery degradation?

It is difficult to point one particular reason for Battery Degradation, it can be caused by multiple factors. Operating and storage conditions like Overcharging, Deep discharging, charging with a high C rate, storing with full SOC, operating and storing in high temperature are the major causes that affect the battery health and leads to battery degradation. Internal chemical reactions like Damage of the Crystalline Structure of anode, formation of SEI layer and corrosion also cause battery degradation.

Charging the battery to its maximum level and deep discharging it, may give long-range but it stresses the battery. During charging and discharging as the anode material absorbs and releases the lithium material, it’s volume will vary. Over the cycling, these volume variations weaken the crystalline structured anode. During the deep discharge of batteries, the variation of volume will be more which causes micro-cracks on the anode. This exposes the new parts of anode particles to electrolytes which results in the formation of SEI, in turn, SEI increases the internal resistance of the battery and consumes some amount of lithium for its formation resulting in irreversible capacity loss of the battery. 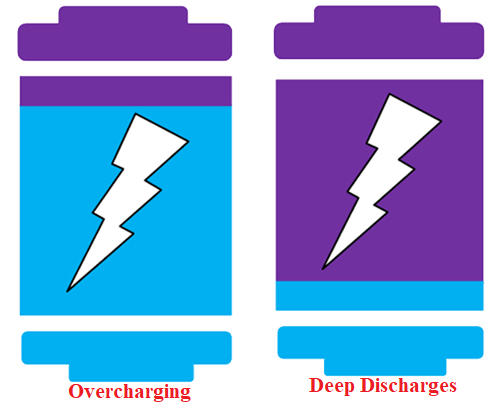 Overcharging lithium batteries will affect the negative electrode of the battery. Overcharge causes the formation of dendrite on the anode and also causes a sudden increment in voltage which is associated with the rise in the internal resistance of the battery. Overcharging also causes an increase in internal temperature which may cause thermal runaway and battery fire.

Basically for lithium-ion batteries optimal temperature range is between 15 °C–35 °C. Operating out of this comfortable range will accelerate the degradation of the battery. At low temperature ionic conductivity of the electrolyte and lithium-ion diffusivity at electrodes will decrease. It takes more time to Charge the batteries in low temperatures due to the slow down of lithium-ion intercalation into the anodes. This will lead to the deposition of lithium ions on the electrode surface and causes the battery degradation.

How to increase the life of an EV battery?

Operating batteries out of their safe operating area lead to battery degradation. Even though batteries are equipped with a battery management system (BMS), we have to take proper care of batteries for the long life and optimal performance of the electric vehicle.

Avoid full charging and deep discharging: For the long life and optimal performance of battery charge and discharge between 80% to 20% SOC. In battery pack BMS won’t allow to charge the battery pack to 100% and won’t discharge it to 0%. there will always be 10% buffer.

Avoid frequent fast charging: Fast charging leads to increment in battery temperature which further leads to battery degradation.  For the extended battery life avoid the fast charging when it is unnecessary.