Understanding Impedance Matching in PCB Design with Example and Calculation 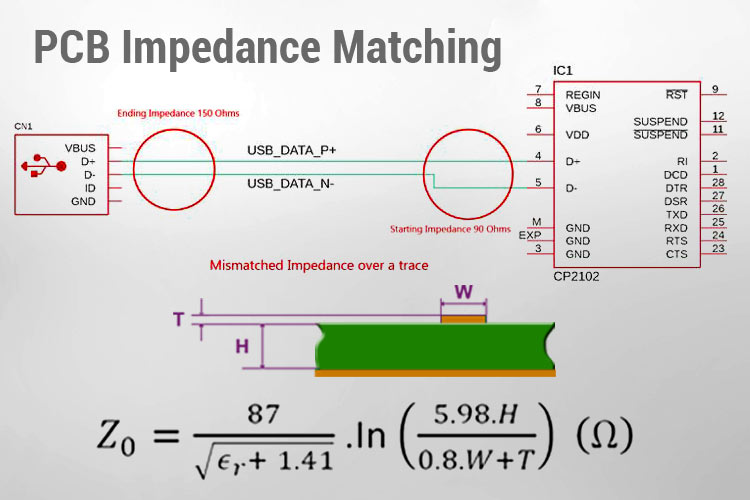 It is fair to consider a PCB itself as a component in which multiple traces are connected. Each trace is different, some are high speed, some are low speed, some are noisy, some are used by the return path of circuit current, etc. Now, as we all know, there are lots of variations in ideal circuits and real circuits. Suppose a high-frequency trace is routed with a 7mm copper trace with a 0.5mm track width, it will add Inductance, Capacitance, and resistance on the track. This makes a difficult situation for high-frequency signal lines as that capacitance and inductance could change the frequency of the signal and the ending point of the trace will produce completely different results than the starting point of the trace. The major degradation of this type of signal is due to the Impedance in PCB trace. In this article, we will understand more about PCB impedance matching, and why it is important.

You can think of Impedance as resistance in AC. Impedance is also measured in Ohms, just like Resistance, but it is very different from resistance. Resistance Ohms works in DC characteristics, but the impedance is used in AC, specifically, that has a frequency.

To ensure that the signal trace is carefully designed and the quality of the signal does not degrade over the traces, impedance needs to be controlled carefully as the impedance of the traces of a PCB is generally uncontrolled.

Essentially, impedance control in PCB design refers to the matching of substrate material properties with trace dimensions and locations to ensure the impedance of a trace’s signal is within a certain percentage of a specific value. Controlled impedance boards provide repeatable high-frequency performance.

Following are the reasons to control impedance in PCB design.

Different signal traces require different impedance characteristics over the entire signal traces. Depending on the types of signal and the speed of the data transfer or frequency, the list below will give a widely accepted controlled impedance for different PCB signal traces.

It is important to remember that the Impedance needs to be maintained all over the signal path.

Thus, when routing signal traces, it is important to maintain the above impedances to maintain signal integrity.

For example, let's choose a popular RF module, the SIM800 module that is widely popular in IoT due to its low cost and easy availability. Many people use this module and design a PCB which may be good for hobby projects but when this PCB will be tested for signal level integrity, the output of the SIM800 will be very poor. Not only this, in the most serious cases, the RF Antenna may provide poor results, as well as the SIM800 fails to work in the network. The major reason in almost all cases is bad PCB design, especially the RF signal Routing. The RF antenna or RF signal is a very high-frequency signal that receives data in the GSM band. This needs to be properly designed for reducing the reflection on the RF traces. The Datasheet says that the target impedance of the RF Trace should be 50 Ohms as a controlled impedance.

The impedance traces depends on the following things:

To calculate the impedance, I use Saturn PCB impedance calculator software, Inc - PCB Toolkit V8.05 that is free software and very famous among designers. It is useful to get the approximate value of the required impedance spacing, etc.

So, Impedance needs to be matched on the D+ and D- lines of the USB. Since it is a USB signal, the requirement of the impedance is 90 Ohms.

Following are my parameters- 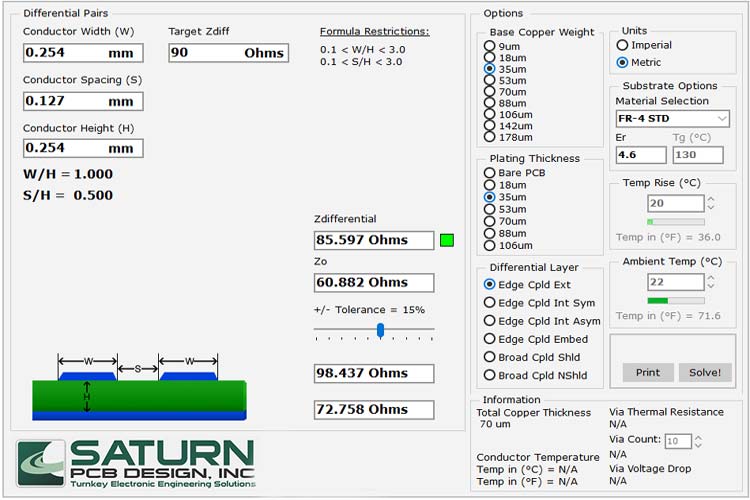 Som with a 15% tolerance and 90 Ohms targeted impedance, the conductor width required 0.254mm, spacing between both is required 0.127mm.