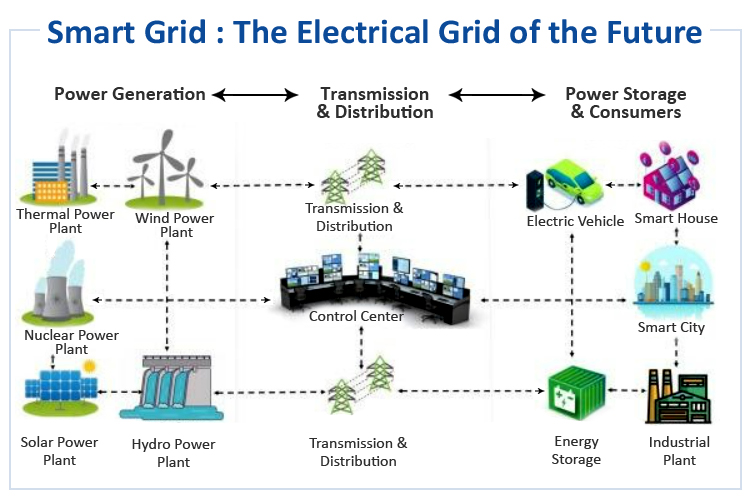 Electrical Grid is one of the most important achievements of recent history. Here, the grid denotes the whole network, right from the powerhouse where energy is generated all the way to our house where energy is utilized, and everything in between. However, the rise in renewable energy generation and growth in distributed energy resources have caused technical challenges for the present grid, thus requiring the need for an intelligent grid that can take decisions on its own in order to keep the whole system safe and stable.

In this article, we will be learning all about the Smart grid. We will also discuss the reason why moving towards smart grids is essential and how we can implement them. We will briefly discuss the status of smart grids in different countries and the challenges faced while implementing it.

What is a Smart Grid?

Smart Grid is the integration of our existing Electrical Grid with 2-way communication and digital sensing technology in order to enhance the capabilities of the current grid and make it more secure, reliable, efficient, and self-sufficient. The smart grid gives the DISCOM capabilities to monitor different parameters and take precautionary steps to prevent faults and blackouts. Smart grid technology also makes it possible for the consumer to remotely control their devices and measure the energy consumption which can considerably reduce the energy consumption. The below image shows the difference between the connectivity and level of communication between a conventional grid (on left) with a smart grid (on right). 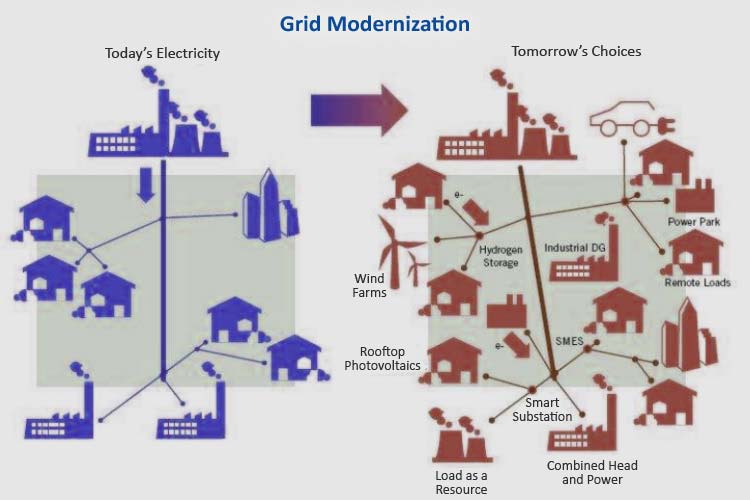 Why a transition to Smart Grid is necessary?

The transition to the smart grid is extremely crucial in order to increase the reliability of our power grid due to the expansion of renewable energy technology. The adoption of renewable energy generation due to the advancement of technology and for curbing pollution has increased generation through distributed energy resources, which is although extremely beneficial for the environment as they have a smaller carbon footprint but can cause an adverse effect on the current grid. It can also improve the efficiency of the grid, reduce losses, thus minimizing the cost of energy for the consumers.

The below graph shows the Renewable Energy Generation Capacity of India, U.K, and USA. 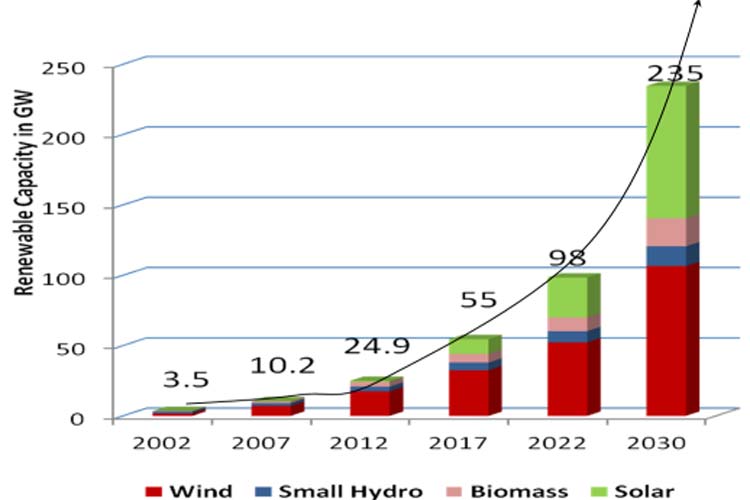 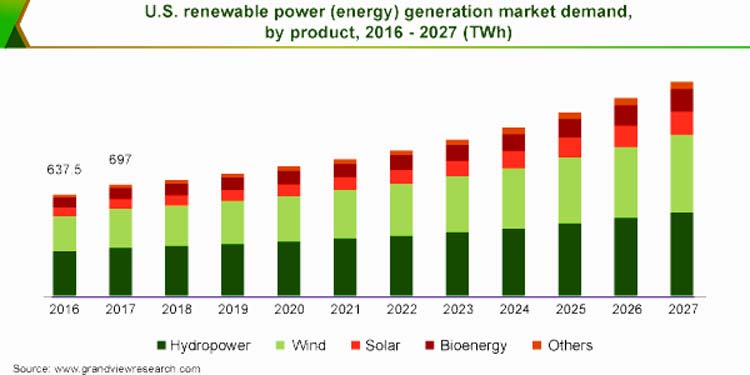 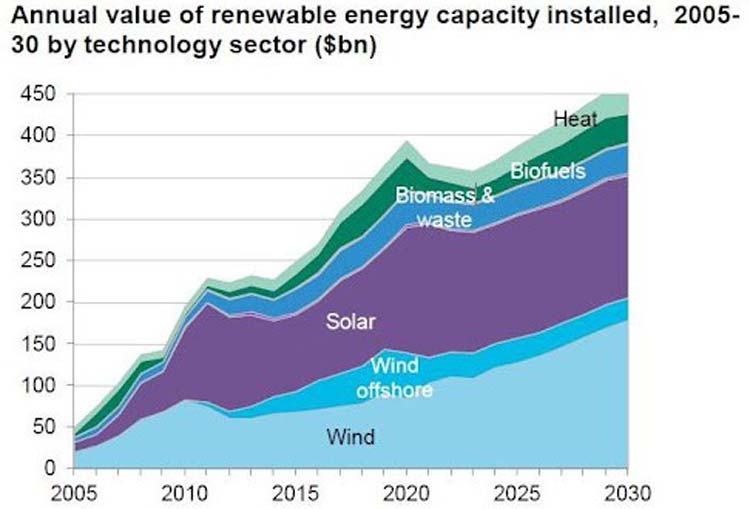 All the developed countries and many developing nations are investing a lot of money to increase the share of renewable energy according to the Paris agreement. The fast adoption of renewable energy can cause a lot of problems for the existing grid. Below is an example of how over-generation of electricity through distributed energy resources such as personal roof-top solar panels can cause a massive problem in the existing grid.

The increase in the Distribute generation might cause an imbalance in the power grid. The below graph shows a typical sunny day in California, U.S. (the curve is known as the duck curve which is caused due to the over generation of electrical energy by the solar panels installed on the rooftop). The over generation causes a drop in energy requirement during the daytime (on a sunny day). Furthermore, the load requirement during the daytime is lower than evening. The whole situation is made worse because the traditional generation stations cannot meet the instantaneous hike in the energy demand, thus these generators are kept running ideal during the daytime and waste the energy. This situation causes a lot of wastage of resources and if not handled properly may result in blackouts. 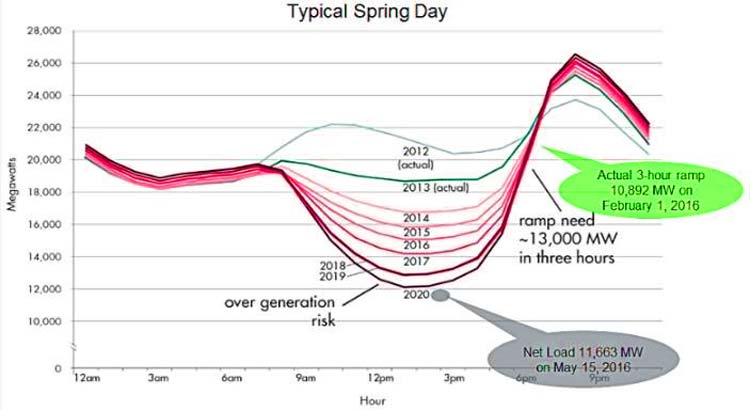 The main targets of the smart grid are:

What technology are essential for the implementation of a Smart Grid?

From the name itself, it can be deduced that the smart grid is the smarter and advanced version of the current grid. It combines the electrical grid network with automation and thus requires digital communication technology. It is capable of keeping the grid safe and utilizing power from distributed sources. The components to achieve a modern grid or smart grid are:

The below image shows how the digital integration of the grid looks like: 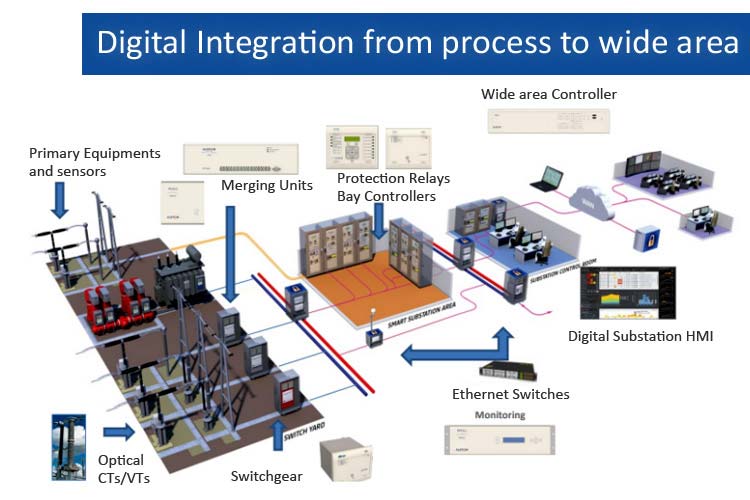 Smart Appliances: Smart appliances make the smart grid possible. These appliances are critical for sensing and controlling the different parameters in the grid. The smart appliance may utilize IoT in order to control the process based on predefined directions set by the user. This can improve the efficiency as well as safety of the system.

For example, a water pump for watering plants can be powered only when the cost of electricity is low, thus providing monetary gains for the owner while also reducing the power load during peak hours.

Smart Power Meters:  It is the most important device for any consumer, which can facilitate the 2-way communication between the consumer and the DISCOM. It features data collection of the end-user, thus enabling features such as automatic bill generation, detecting device fault leading to faster repair and rectification of any problem.

Smart Substations: The smart substation is the most critical component of a smart grid system. It enables the monitoring and makes the substation more flexible by giving more control to the substation operator to allow for faster adjustments to conditions that can prevent faults or blackouts. It ensures that the whole grid is safe and in case of any technical issues, smart substations can help in faster recovery of the system. The smart substation can also allow automatic control of the path of electricity flow in order to manage demands.

Phasor Measurement Unit (PMU): Phasor measurement unit, also known as PMU or synchro-phasor. PMU provides detailed information about the power quality in a grid over a large area. It is used to analyze the phasor which can give information about the magnitude and phase angle at a point in the transmission cable. The data can be used to find if the voltage, current, and frequency are within specified tolerances. The data is time-synchronized by using GPS or IEEE 1588 precision time protocol. The main application of PMU are:

What some countries want to achieve by upgrading into Smart Grids

The Smart grid has a lot of benefits, but upgrading our present grid into a smart grid is a time-consuming, resource-intensive, and very expensive decision to make. Each country has its own vision and specific reasons to install a smart grid. Some of the countries and their vision for implementing smart grid is described below:

India: India is rapidly increasing its renewable energy generation in order to meet its energy demands and curb pollution. The country’s large population and plans to adopt EVs require fast adoption of a Smart grid. But the most important reason is a large number of losses. India has a transmission loss of over 20%, the majority of which is due to the theft of electricity. According to the National Smart Grid Mission, the aim of adopting a Smart grid is to ensure an adaptive and sustainable grid that provides secure, reliable energy to all the stakeholders.

China: China has considered the manufacturing hub of the world and the growth of energy demand is a major challenge in the country. Thus, China’s Smart grid adoption is focused on expanding the generation capabilities through renewable resources, improving China’s electricity transmission and distribution systems in order to reduce losses but its main goal is to curb pollution which has been a major concern for a long time.

South Africa: The main objective for South Africa is to improve the network reliability, increase the adoption of renewable energy in order to decarbonize their electricity generation.

United Kingdom: The main idea of the UK’s Smart Grid Forum behind the installation of the smart grid is to improve control over the electrical grid and to give the consumers greater control of their energy use. According to the smart grid forum, the project would create over 9000 jobs and will save over £12 billion by 2050.

Major challenges faced in the implementation of Smart Grid

Like any other revolutionary technology, the smart grid is also facing a lot of opposition and concerns due to factors such as high initial cost, remote control operation, and the lack of awareness among the general public. The main concerns of adopting smart grid technology are related to the fear of breach of privacy of data. The smart meter has kill switches that can be remotely operated in order to disconnect the power from a specific household. There is a false notion that the RF communication used by smart meters causes cancer and other health to the consumer. A large population also believes that the government machinery might misuse the technology to trouble its opponents and activists. The major challenges in the adoption of the Smart grid are:

The electrical grid is considered an important achievement of the 19th century.  But due to the growth of distributed energy resources and the adoption of rooftop solar panels, the present grid is at constant risk of overload and disturbance. Therefore, to increase the Renewable energy generation through distributed energy system a smarter grid that can take care of different parameters with human intervention is required, hence the Smart Grid is required. Albeit having a very high initial setup cost, the smart grid is expected to save billions of dollars in energy wastage and can improve the quality of power delivered to the household. The presence of 2-way communication between the consumer and the electrical distribution company and the use of smart appliances make the smart grid self-sufficient, thus improving reliability while increasing efficiency and reducing labour costs such as manual meter reading. Albeit having so many pros, high initial cost and concern over data security make adoption of smart grid slower than expected.
I hope that you enjoyed the article, if you have any questions or want to add to the data, please feel free to write it down in the comment section.