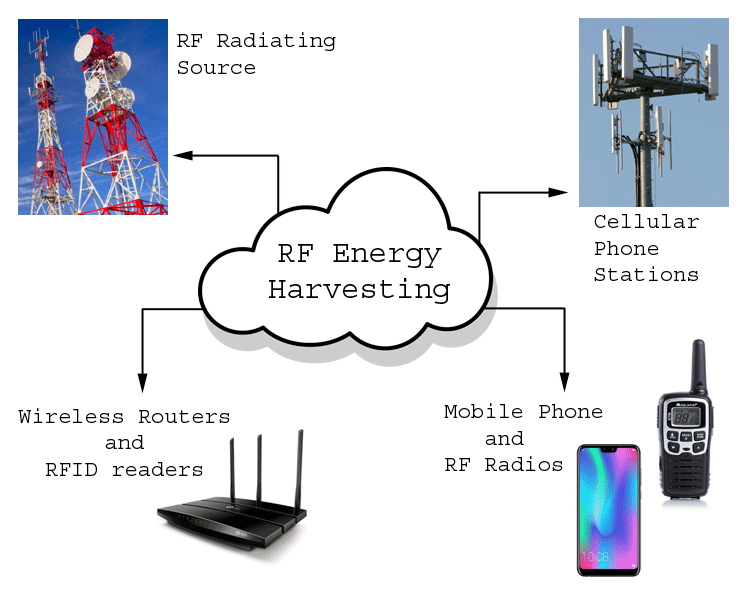 There are many wireless devices working across the world which makes the people’s life easy and comfortable in many ways, but all these wireless devices are needed to be charged again and again to use them. But what if, we can use the same radio frequency that transfers data, to charge the devices. This technology would reduce or omit the use of batteries for powering the circuit inside the device. The idea is to harvest energy from the radio frequency using the antennas instead of generating energy from motion or solar energy. This article would discuss RF Energy Harvesting in detail.

How does RF Energy Harvesting work?

There are many sources of RF available but the important thing to understand first is, How to convert the RF into energy or electricity? The process is quite simple, it is just like the normal process of an antenna receiving a signal. So, let us understand the process of conversion using a simple diagram.

The source (can be any device or electronic circuit that) transmits RF signals and the application circuit, which has an inbuilt circuit for energy conversion, receives the RF, which then causes a potential difference across the length of the antenna and creates a movement of charge carriers through the antenna. The charge carriers move to the RF to DC conversion circuit i.e. the charge is now converted into DC current using the circuit which is stored in the capacitor temporarily. Then using the Power Conditioning circuit, the energy is amplified or converted to the potential value as desired by the load.

There are many sources that transmit RF signals like satellite stations, radio stations, wireless internet. Any application that has RF energy harvesting circuit attached with it, would receive the signal and convert it into electricity.

The process of conversion begins when the receiving antenna receives the signal and causing a potential difference across the length of the antenna which further makes a movement in the charge carriers of the antenna. These charge carriers from antenna move to the impedance matching circuit connected through the wires. The impedance matching network (IMN) makes sure that the power transfer from the antenna (RF source) to the Rectifier/Voltage Multiplier (Load) is maximum. The impedance in an RF circuit is as important as resistance in the DC circuit for optimum power transfer between the source and the load.

The RF signal received at antenna has a sinusoidal waveform i.e. is an AC signal and needs to be converted to DC signal. After passing through IMN, the rectifier or voltage multiplier circuit rectifies and amplifies the signal as per the application need. The rectifier circuit is not a half-wave, full-wave or a bridge rectifier instead it is a voltage multiplier (a special rectifier) circuit which rectifies the signal and also boosts the rectified signal based upon the application requirement.

The electricity converted from AC to DC using a voltage multiplier moves to the power management circuit which uses a capacitor or battery to store the electricity and supplies it to the load (application) whenever needed.

What are the sources of RF signal?

As mentioned earlier, there are many devices using RF signals it means that there would be many sources for receiving the RF signal for harvesting the energy.

RF sources which can be used as a source of energy are:

These are the major devices present all over the world which are the major sources of RF that can be used to harvest energy i.e. generate electrical energy.

Some of the applications of Energy Harvester using RF system are listed below:

Apart from these practical applications, there are many fields where Energy Harvesting technology can be used like in Industrial Monitoring, Agriculture industry, etc.

With good applications and a number of advantages, there are some disadvantages too and these disadvantages are caused due to the existing limitation in that thing.

So the limitations for RF energy harvesting system are:

Apart from these limitations, Energy Harvesting using Radio Frequency (RF) has many advantages as a result of which it has application in Automation Industry, Agriculture, IOT, Healthcare Industry, etc.

The hardware available in the market that supports Radio Frequency Energy Harvesting are: 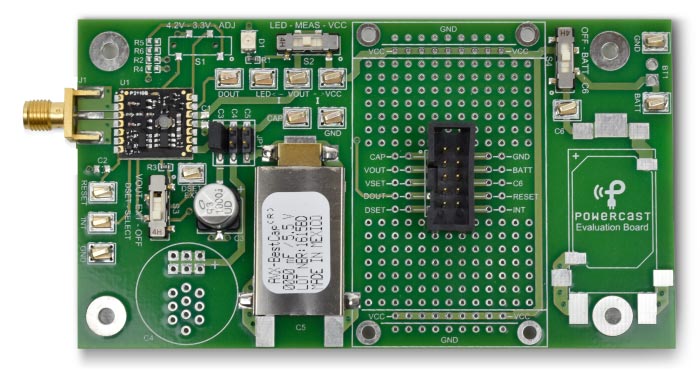 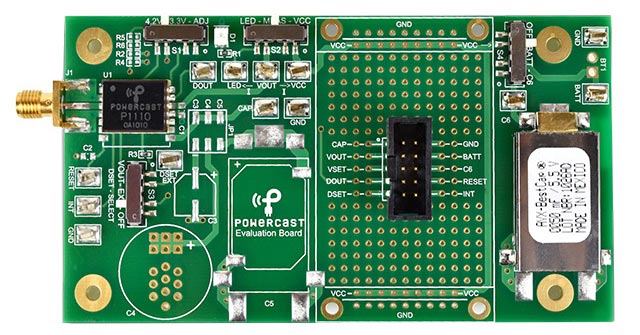 These are the two RF-based energy harvesting devices available in the market and are developed by the company Powercast.

Use of RF Energy Harvesting in IOT Applications

With the growing popularity of the Internet of Things (IoT) in the automation of electronic devices, IoT applications are being developed for homes and industries, which could potentially remain powered for years awaiting a trigger. With energy harvesting capability, such devices can literally pull energy out of the air to recharge their own batteries or harvest enough energy from the environment so that a battery may not even require any external power source to charge. Such self-powered sensors are now typically referred to as “zero-power” wireless sensors for their capability of providing sensor data directly on an IoT cloud, using a wireless gateway with no apparent source of energy. By harvesting power from available RF energy sources, a new generation of ultra-low-power (ULP) wireless devices, such as IoT sensors, can be developed for low-maintenance applications like remote monitoring.

Energy harvesting is considered much like a “companion” technology to wireless communications since it can enable extended battery life for mobile devices and possibly battery-free operation for some electronic devices.