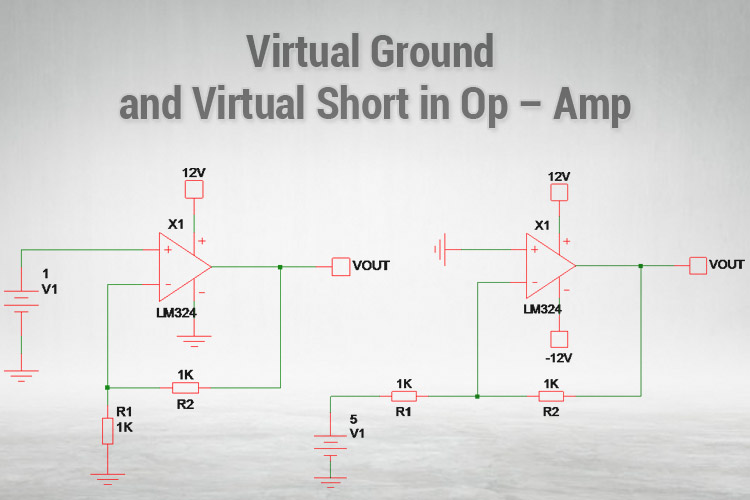 Operational Amplifiers are the workhorse of analog electronic designs. These humble devices are used from simple voltage followers to complicated inverter designs since the time immemorial. Here at CircuitDigest, we have already discussed a wide range of op-amp circuits and its applications. Today, we will be looking into another interesting concept associated with Op-Amps, called Virtual Ground and Virtual Short. So, let’s dive into it.

What is Virtual Ground and Virtual Short?

Likewise, in Figure (c), even if the VA is connected with a 5V source but due to some effects if the VA= VB = 0V (Gnd_Potential) means this effect will be called as “Virtual Ground”.

The above mentioned details may seem like magic or unrealistic. But, the basic Op-Amp operations follow the above two concepts, and understanding the reason behind this will help to understand full Op-Amp physics.

The below circuit is the famous non-inverting Op-Amp topology which has 1V input and having the gain resistance of R1 = R2 = 1KΩ. It has some defined equations in order to find the relation between Input and Output Voltage relation. Instead of using those defined formulas, we can apply the Basic Op-Amp rules in order to find the output voltage. 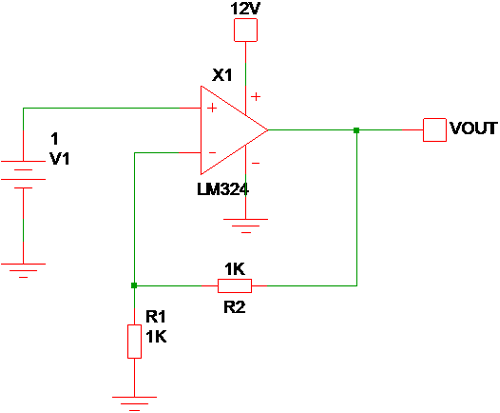 So, once the Op-amp gets “Powered On” the internal parameters of Op-Amp are worked to bring Inverting Input voltage equal to 1V and as per rule to there is no current flow through the Inverting pin. Due to that R1 & R2 becomes voltage divider with VOUT as a Source voltage and Voltage divider output should be equal to Non-Inverting Input Voltage.

The output voltage is varied to either higher or lower voltage levels from its previous state in order to bring the V(+) = V(-). Here, due to R1=R2 and both make voltage divider combination and the VOUT = 2V makes (V+) = V(-).

Based on the below Non-Inverting Op-Amp gain equation:

So, for Non-Inverting Op-Amps the Inverting Pin Voltage is equal to Non–Inverting voltage without direct short circuit between both the terminal and the Equaling Voltage at both the terminals happens by Virtual Concept and this effect is called as “Virtual Short in Op-Amp”.

By applying Rule 1 and 2 in the below Inverting Op-Amp configuration, the Voltage at Inverting Pin should be Zero. But, the Inverting pin (-) is connected to a 5V source via R1. As per Rule 2, there is no current flows through Inverting (-) Input and all currents are flows through R1 and R2. In order to make the V(-) = 0, the VOUT has to supply compensating voltage. 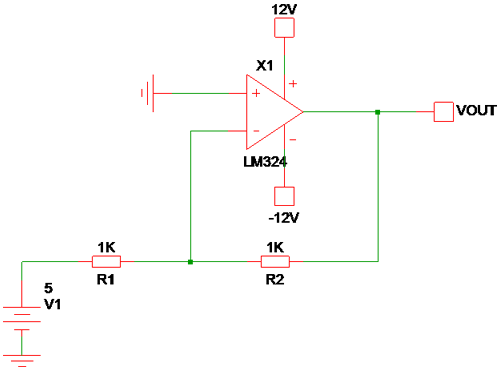 Importance of Virtual Ground and Virtual Short in Op-Amp

The Virtual Ground and Virtual Short are the two important parameters that are used to examine any Op-Amp circuit. Most of the Op-Amp circuit derivations and transfer functions formulated based on these two concepts and make the circuit analysis simpler without considering the input parameters of the Op-Amp.

The Virtual Ground and Virtual Short Concept are only applicable for “Closed Loop” Op-Amp circuits. In Open Loop or the Op-Amp used as comparators, there is no feedback mechanism to control the matching between Inverting and Non-Inverting Input Voltage. So, the Op-Amp always operates in Saturation mode and Virtual Ground, Virtual Short Concepts doesn’t work. In these types of Conditions, the designer should look into the “Differential Input” Voltage limits in order to avoid the Op-Amp malfunctions.

In some of the Closed-loop conditions also the Virtual Ground and Virtual Short concepts will get void when the output matching limit exceeds the Op-Amp Vcc and Vee supply ranges.