How does Successive Approximation (SAR) ADC Work and Where is it best used? 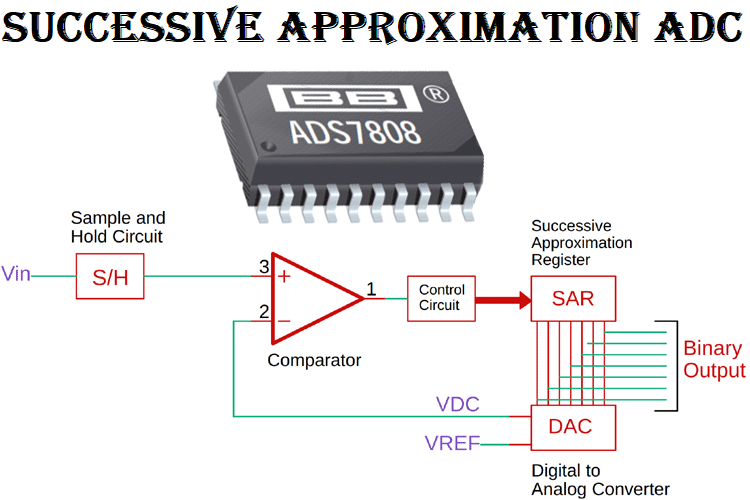 An Analog to Digital Converter (ADC) is a type of device which helps us to process the chaotic real-world data in a digital standpoint. To understand real-world data like temperature, humidity, pressure, position, we need transducers, all of those measure certain parameters and give us an electrical signal back in the form of voltage and current. Since the majority of our devices nowadays are digital, it becomes necessary to convert those signals into digital signals. That is where the ADC comes in, though there are many different types of ADCs out there but in this article, we are going to talk about one of the most used ADC types which are known as the successive approximation ADC. In an early article, we have talked about the basis of ADC with the help of Arduino, you can check that out if you are new to electronics and want to learn more about ADC.

What is a Successive Approximation ADC?

The Successive Approximation ADC is the ADC of choice for low-cost medium to high-resolution applications, the resolution for SAR ADCs ranges from 8 - 18 bits, with sample speeds up to 5 mega-samples per second (Msps). Also, it can be constructed in a small form factor with low power consumption, which is why this type of ADC is used for portable battery-powered instruments.

As the name implies, this ADC applies a binary search algorithm to convert the values, which is why the internal circuitry may be running at several MHZ but the actual sample rate is much less due to the Successive Approximation algorithm. We discuss more about it later in this article.

The cover image shows the basic successive approximation ADC circuit. But to understand the working principle a little better, we are going to use a 4-bit version of it. The image below shows exactly that.

As you can see, this ADC consists of a comparator, a digital to analog converter, and a successive approximation register along with the control circuit. Now, whenever a new conversation starts, the sample and hold circuit samples the input signal. And that signal is compared with the specific output signal of the DAC.

Now let's say, the sampled input signal is 5.8V. The reference of the ADC is 10V. When the conversion starts, the successive approximation register sets the most significant bit to 1 and all other bits to zero. This means the value becomes 1, 0, 0, 0, which means, for a 10V reference voltage, the DAC will produce a value of 5V which is half of the reference voltage. Now this voltage will be compared to the input voltage and based on the comparator output, the output of the successive approximation register will be changed. The image below will clarify it more. Further, you can look at a generic reference table for more details on DAC. Previously we have made many projects on ADCs and DACs, you can check those out for more information. 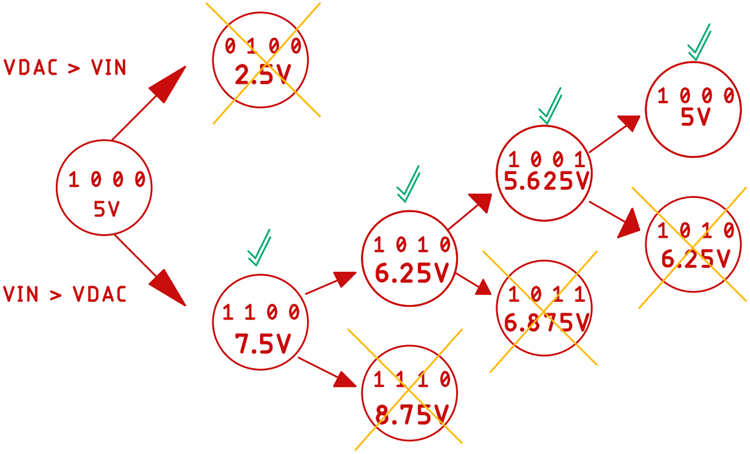 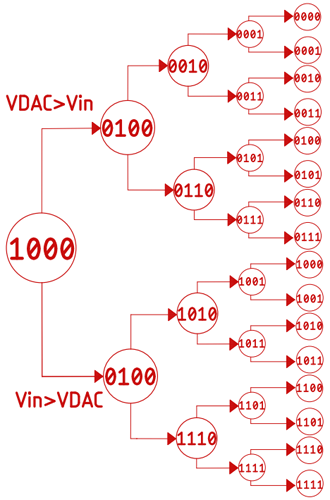 In general, we can say that for an N bit ADC, it will take N clock cycles, which means the conversion time of this ADC will become-

*Tc is short for Conversion Time.

And unlike other ADCs, the conversion time of this ADC is independent of the input voltage.

As we are using a 4-bit ADC, to avoid aliasing effects, we need to take a sample after 4 consecutive clock pulses.

The typical conversion speed of this type of ADC is around 2 - 5 Mega Samples Per Seconds(MSPS), but there are few which can reach up to 10 (MSPS). An example would be LTC2378 by Linear Technologies.

The resolution of this type of ADC can be around 8 - 16 bits, but some types can go up to 20-bits, an example can be ADS8900B by Analog Devices.

As this is a most commonly used ADC, it's used for many applications like uses in biomedical devices that can be implanted in the patient, these types of ADCs are used because it consumes very less power. Also, many smartwatches and sensors used this type of ADC.

In summary, we can say that the primary advantages of this type of ADC are low power consumption, high resolution, small form factor, and accuracy. This type of character makes it suitable for integrated systems. The main limitation can be its low sampling rate and the parts required to build this ADC, which is a DAC, and a comparator, both of those should need to work very accurately to obtain an accurate result.