We all know that life is sustained on earth because of the sun as it provides sufficient heat energy to keep the earth warm. This energy is delivered by the sun in the form of Electromagnetic radiation which is usually called solar radiation. Some of the radiation is beneficial to humans while another radiation is harmful to all life.

To reach solar radiation to the earth's surface it must pass through the atmosphere where it gets absorbed, scattered, reflected, and transmitted which results in the reduction of the energy flux density. This reduction is very significant as more than 30% loss occurs on a sunny day and on a cloudy day it goes a high as 90%. So the maximum radiation which reaches the earth's surface through the atmosphere will never be higher than 80%.

Solar flux is very important to measure, as it is the basis of life on earth and is used in building many products whether its related to electronics, crops, medicines, cosmetics, etc. In this tutorial, we will learn about solar radiation and its measurement and will also learn about the two most popular solar energy measuring instruments- Pyrheliometer and Pyranometer.

Now let us have a look at the spectrum of electromagnetic radiation in the below diagram.

Before going into the working of these instruments you need to understand a couple of concepts that are used while designing the devices. So now let’s look into those concepts. 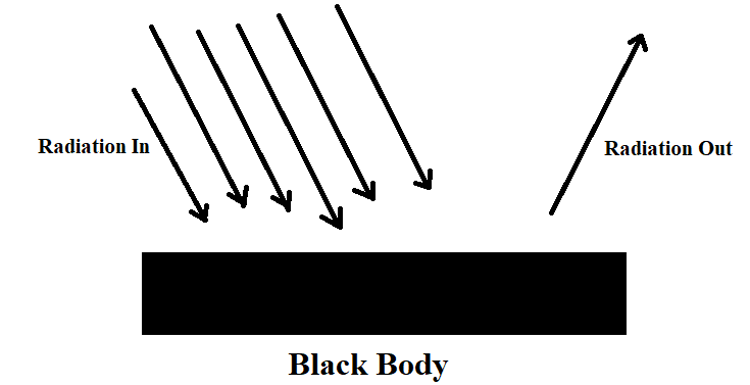 The thermocouple is a simple device constructed using two conductors made of different material as shown in the figure. 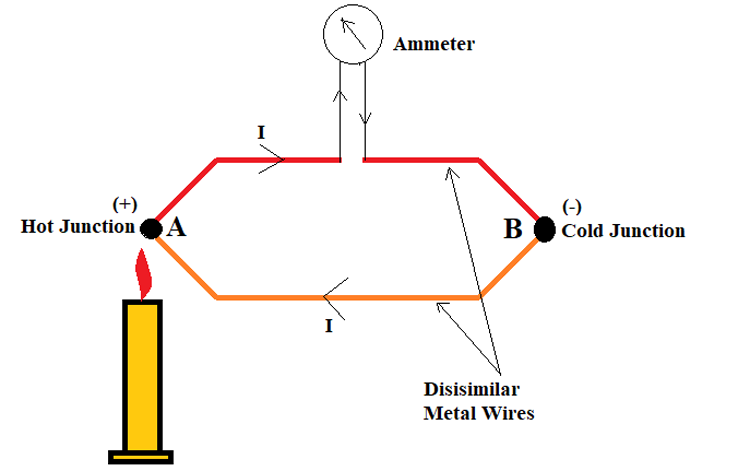 Now after basics are covered, let’s look into the construction and working of solar radiation measuring instruments.

Pyrheliometer is a device used for measuring direct beam radiation at normal incidence. Its outer structure looks like a long tube projecting the image of a telescope and we have to point the lens to the sun to measure the radiance. Here we will learn the working principle of Pyrheliometer and its construction. 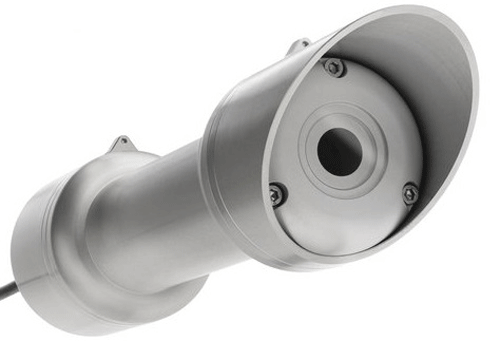 To understand the basic structure of the Pyrheliometer, look at the diagram shown below. 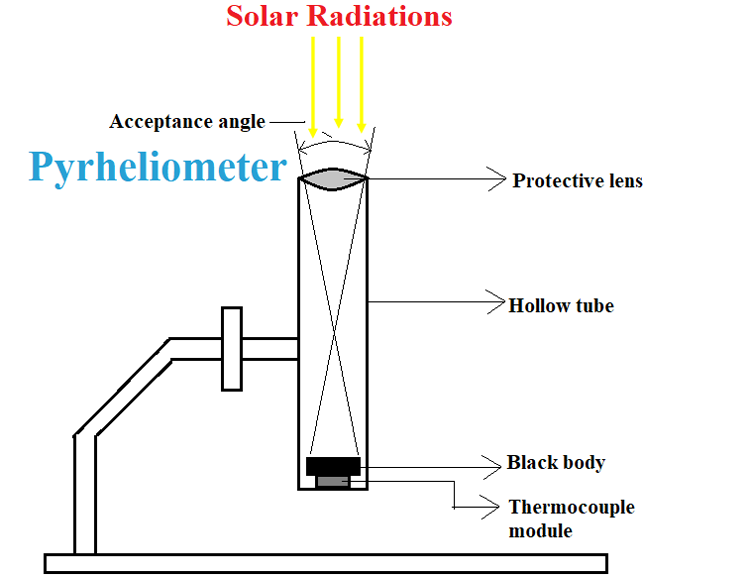 Here the lens is pointed towards the sun and the radiation will pass through the lens, tube and at the end falls on to the black object present at the bottom.  Now if we redraw the entire internal structure and circuit in a simpler manner it will look something like below. 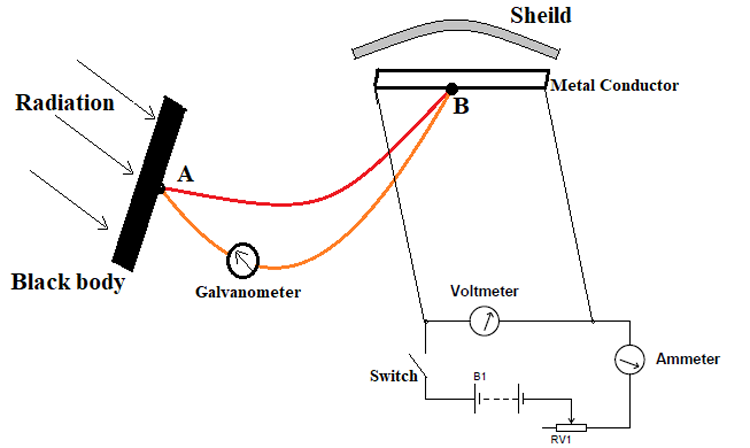 In the circuit, it can be seen that the black body absorbs the radiation falling from the lens and as discussed earlier a perfect black body completely absorbs any radiation falls on it, so the radiation falling into the tube gets absorbed by the black object entirely. Once the radiation gets absorbed the atoms in the body get excited because of the increasing temperature of the entire body. This temperature increase will also be experienced by the thermocouple junction ‘A’.  Now with junction ‘A’ of the thermocouple at high temperature and junction ‘B’ at low temperature, a current flow takes place in its loop as discussed in the working principle of the thermocouple. This current in the loop will also flow through the galvanometer which is in series and thereby causing a deviation in it. This deviation is proportional to current, which in turn is proportional to temperature difference at junctions.

Now we will try to nullify this deviation in the galvanometer with the help of the circuit. The complete process for nullifying the deviation is explained in step by step below.

Now keep adjusting the rheostat until the galvanometer deviation becomes completely void. Once this happens we can obtain voltage and current readings from the meters and do a simple calculation to determine the heat absorbed by the black body. This calculated value can be used to determine the radiation, as heat generated by the black body is directly proportional to the radiation. This radiation value is none another than direct beam solar radiation which we are desired to measure from the beginning. And with this, we can conclude the working of the Pyrheliometer.

Pyranometer is a device that can be used to measure both beam radiation and diffuse radiation. In other words, it is used to measure total hemispherical radiation (beam plus diffuse on a horizontal surface). Here we will learn about Pyranometer working principle and its construction.

The device looks like a UFO saucer which is the best shape suited for its purpose. This device is more popular than the others and most of the solar resource data nowadays measured using it. You can see the original picture and internal structure of the Pyranometer below. 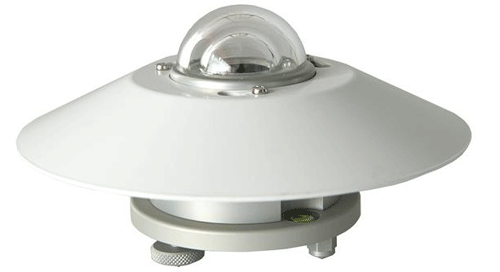 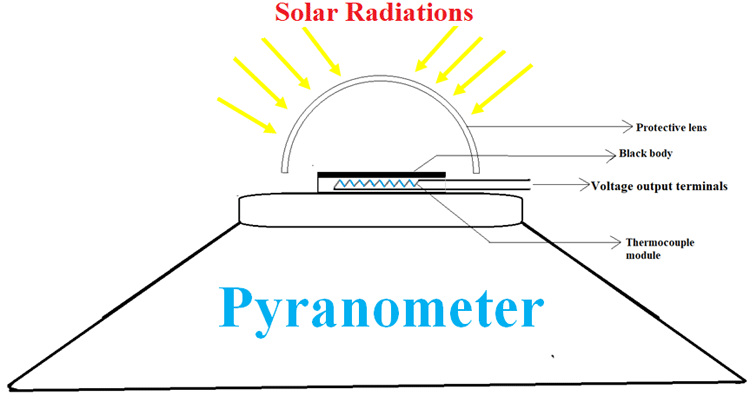 Here the radiation from the surrounding atmosphere passes through the glass dome and falls onto the blackbody situated at the center of the instrument. Like before, the temperature of the body rises after absorbing all the radiation and this rise will also be experienced by the Thermocouple chain or Thermocouple module present directly beneath the blackbody. So the one side of the module will be hot and another will be cold because of the heat sink. The thermocouple module generates a voltage and this can be seen at the output terminals. This voltage received at the output terminals is directly proportional to temperature difference according to the principle of a thermocouple.

Since we know that the temperature difference is related to radiation absorbed by the black body, we can say the output voltage is linearly proportional to the radiation. 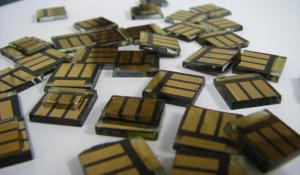 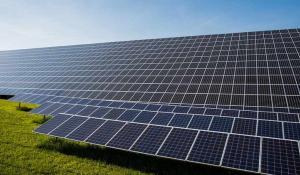 Challenges that Make Setting up a Solar Farm Less Feasible 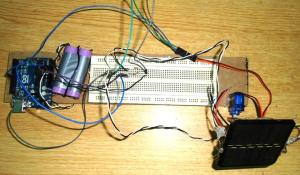