Getting Started with LabVIEW: Glow LED with Button

LabVIEW is an acronym of Laboratory Virtual Instrumentation Engineering Workbench. Their appearance and operations resembles real world instruments, such as button, voltmeter, oscilloscope, etc,. and hence they are called as Virtual Instruments (VIs). It offers a graphical programming approach and helps to simulate real world products, which helps you to visualize and program. Thus it requires only logic to program and it is syntax independent. LabVIEW is a high level design tool. It is an interpreter programming (i.e.,) we need not compile it. It compiles itself, we only need to execute it.

How it Differ From Other Circuit Designing / Simulation Softwares?

Why One should prefer LabVIEW?

One can prefer LabVIEW, when the program is too large. This is as simple connecting hardware components for your project but in a software.

Below diagram is showing the difference between textual and graphical programming. On the left side, there is an Arduino program to blink a LED with 1 second delay, and on the right side its graphical replica has been made using LabVIEW software. Whenever you press OK button the Boolean LED will blink on and off with 1 second of delay. 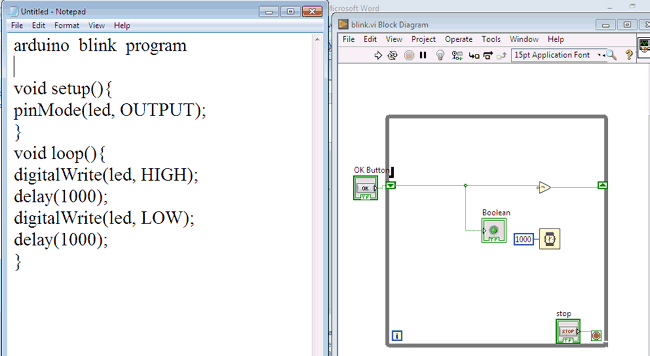 First download LabVIEW software from National Instruments. Once you launch the software, Getting Started window appears. 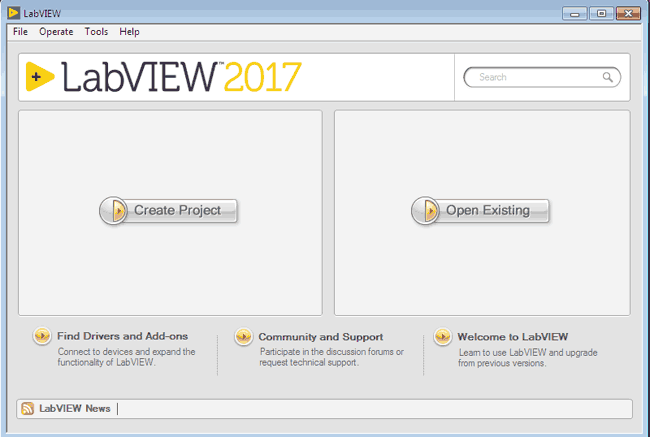 This window is known as Getting Started window. Press ctrl+N to open a New Project.

Once you open New Project, you will see front panel and block diagram. 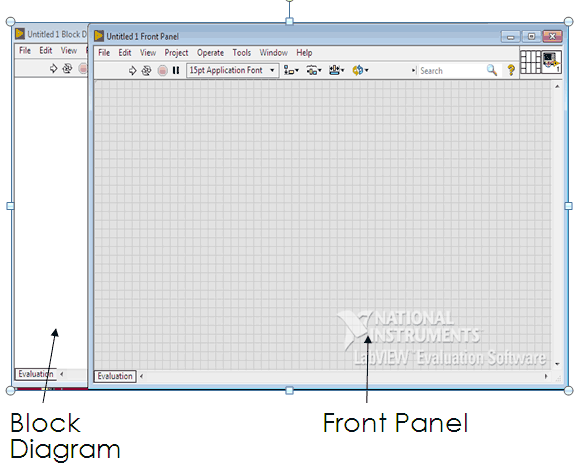 Press ctrl+T to bring front panel and block diagram side by side like this,

In LabVIEW, you will be building a user interface i.e., front panel, with controls and indicators. Controls are nothing but the inputs you give, such as knobs, switch, etc., Indicators are nothing but the outputs you create, such as led, graphs, etc., I will explain all the entities with an example, to make you understand better.

Data-types are nothing but the classification of variables. The following are the data-types used in LabVIEW and their color specification in the block diagram.

Polymorphic- The one which can be any of these above data-types or may not be these.

Adding Controls to the Front Panel 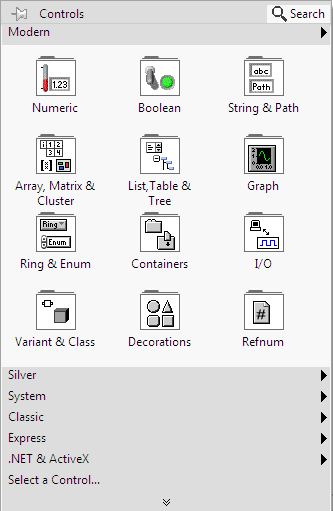 NOTE: As for glowing led with button press, the control over here is button. So select the Boolean controls palette.

You will use this button control to glow the led.

Thus button control is added to the front panel.

Adding Indicator to the Front Panel:

To Run the Virtual Instrument:

Thus the led glows when you press the button.

Note: If the run button is broken, then it means there is a error in the LabVIEW programming. To know what error is, press that broken run button, you will approach a dialog box describing the error.

Refer video given at the end of the article.

In the below example, instead of button, we will use knob from Boolean palette.

Note: Check the Video at the end. 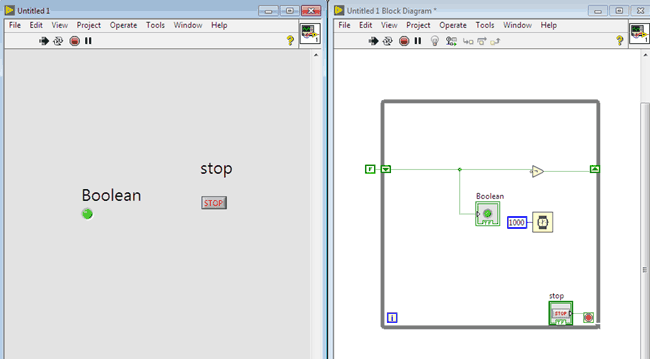 Constants are value that you can change according to your requirement like 1000ms for 1 second.

NOTE: You can use your own logics to build above examples.

You can use the below keyboard shortcuts to control LabVIEW.

What is LabVIEW? - Realy Expensive

Labview comes into its own when controlling Test and Measuring Equipment. It has drivers for a vast number of Instruments from many vendors. For Industrial users it is an essential.
But, the pricing structure reflects this. If it is for you, you will know about it already.. or have deep pockets.
I did download the trial to write some code, but could not run it at work because code written on the trial won't run on anything but the latest version.. If there is a $30 version for home users, they don't advertise it on their web site.