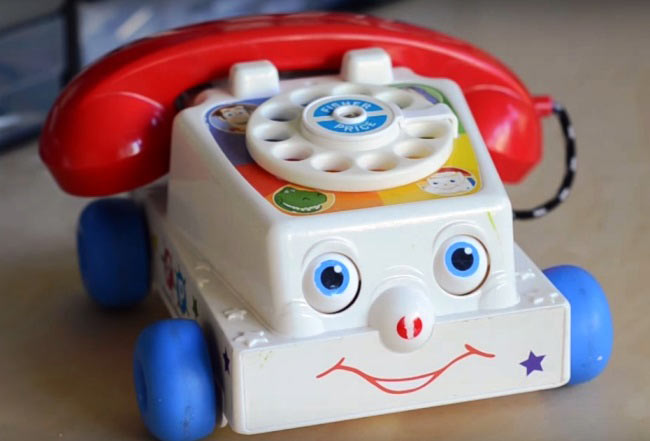 You must have played with Chatter Telephone, in your childhood. Chatter telephone has some pre-recorded voices, which are being played on Dialling the numbers. You also have seen it in movie Toy Story 3. Here this guy Grant Gibson converted a Fisher Price’s Chatter telephone into Talking Chatter Smart Phone using a Raspberry Pi board. This SmartPhone talks to you, tells you the Weather Information, Movies information and alerts you on specific events. Also you can do much more with it.

Apart from Raspberry Pi, he used a Wi-Fi dongle for wireless connectivity and of course a Python script to handle all the requests. This phone basically using JSON format APIs to pull from various online services. Currently you can get Movies information from Rotten Tomatoes and Weather forecast from Forecast.io , by using this Script. This Chatter SmartPhone also has Radio and Push Notification system from Twitter account. 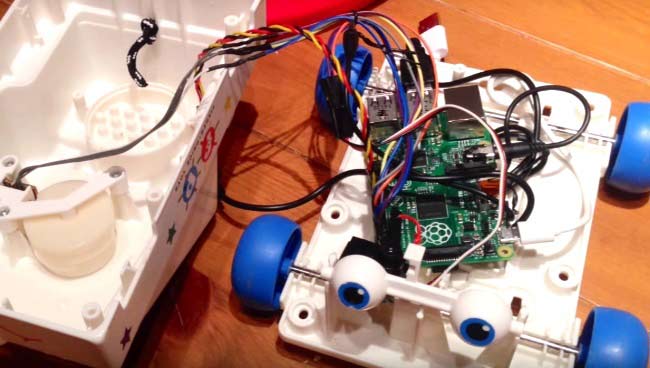 Inputs can be given through its rotatory dial and output is a voice from Chatter phone’s built-in speaker, which is connected to 3.5mm jack of Raspberry Pi. Rotatory dial uses three micro switches to read the Dial positions. It’s the built-in mechanism of Chatter phone which reads the push and release sequence of micro switches to read the dial position, it has been kept as it is in Chatter SmartPhone.

A tiny 9g servo motor has been added to make its Eyes move, which is seriously looking very cool. And also a Push button switch is used as ‘On-hook’ sensor, which detects that the receiver is on the Cradle.

One can integrate any web service using JSON API, and can set Alerts and Push the notifications to his twitter account, like this guy set one cool alert that: When International Space Station is passing over his location. Interactive menu and phrases are pre-recorded. And for unrecorded content, Google Translate text-to-speech API has been used.

So get your hands on Raspberry Pi and make this cool Chit-chat Chatter SmartPhone.