Any electronics projects enthusiast has to first familiarize themselves with basic electronic projects. This includes trying to build simple devices and circuits using components like resistors, LEDs, diodes, transistors, etc. This forms a firm foundation in handling electronic components and helps to build complex projects later. Once familiar with the basics, one can move on to sensors and actuators. Using them is a lot easier with development boards like Arduino, NodeMCU, or Raspberry Pi work on a bit complex electronic projects. Here, we have described a beginner level project with NodeMCU. An ESP8266 is programmed to display ‘0’ to ‘9’ and ‘a’ to ‘f’ on the Seven Segment Display. You can check out other esp8266 Projects on our website. 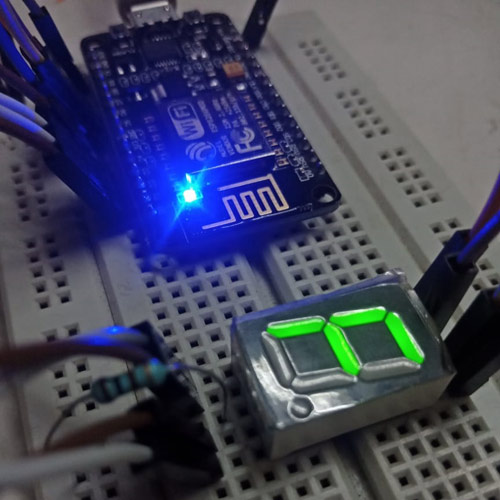 NodeMCU is basically a low-cost, open-source hardware and software development platform for hobbyists to build projects. It has a growing community and has a great fan base.  To put it in simple terms, NodeMCU is an open-source firmware developed for the ESP8266 Wi-Fi chip. ESP8266 is a Wi-Fi system on a chip produced by Espressif Systems. ESP8266 can serve as a Wi-Fi-enabled microcontroller or can be used as an external Wi-Fi module. Standard AT commands are be used when ESP8266 is used as an external Wi-Fi module and it communicates with the microcontroller using serial UART. Or if it is serving as a Wi-Fi-enabled microcontroller by programming using the provided SDK.

Seven Segment Display (SSD) is a commonly used output device that can display digits and letters. It’s mostly used in calculators, digital watches, etc. It is basically 7 LED segments arranged like an “8” for ease of display. Each segment is connected to a pin and is called ‘a’, ‘b’, ‘c’, ‘d’, ‘e’, and ‘f’ pins. Along with this, it has a dot which is called a ‘dp’ pin. 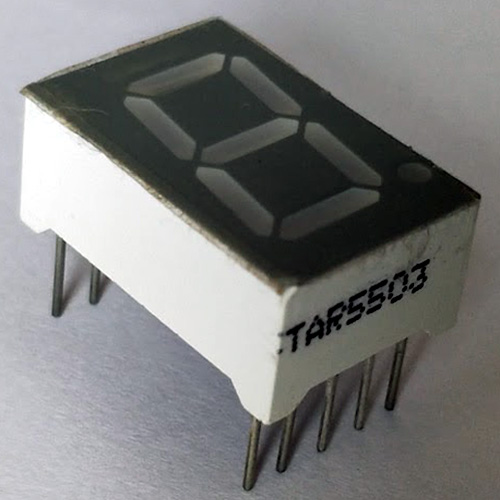 The figure shows physical appearance of the Seven Segment Display

The figure shows the pinout of Seven Segment Display

The SSD is of two types: Common Cathode and Common Anode. In the common cathode, all the cathode pins of LED segments are connected and given as “Common pin” of the SSD. This pin is connected to the ground so that when a positive voltage is given to any segment, that completes the circuit and that segment is lit. Similarly, in a common Anode, all the positive terminals (anode terminals) of LED segments are shorted and given as “Common pin” of SSD, and this pin is connected to positive voltage.

Circuit Diagram to Interface a Seven-Segment Display with NodeMCU

Since this is a beginner-level project, the circuit is very simple as you can see in the figure given below. 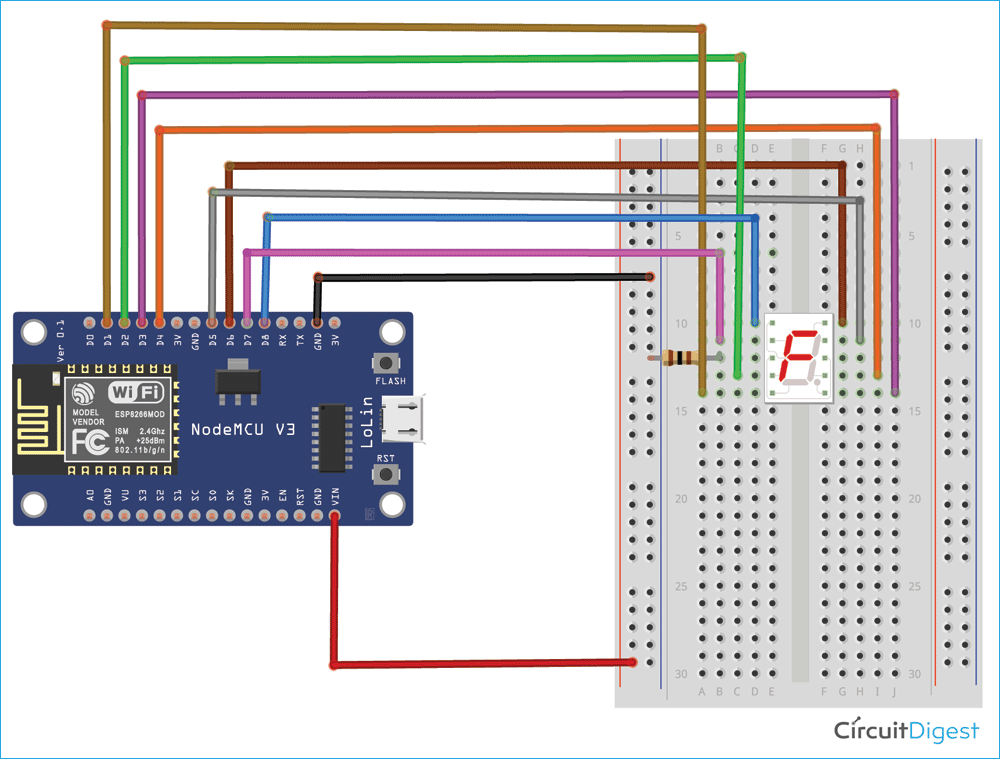 The ESP8266 is powered when it is connected to the computer or laptop through the MicroB USB connector. A 3.3V output supply generated by the on-board regulator. This is used to supply power to the SSD through the ‘Vin’ pin.

A simple code is written on Arduino IDE to control the segments of the SSD to display the required digit or the alphabet. The GPIO pins of ESP8266 are connected to the pins of SSD to control that segment. Whenever we want a particular segment to be lit, we supply a positive voltage to it. The complete code can be found at the end of the page. Make sure to install the “ESP8266” library before proceeding to code. This part is explained in the video in detail.

Open the Arduino IDE and declare the pins of SSD (A, B, C, etc) as “const”, “int” type data and assign them to GPIO pins of ESP8266. In the “void setup()” function, declare the pins of SSD as “OUTPUT”. Whatever is written inside the “void setup()” function is executed only once. This part is necessary to light up particular segments so that multiple lit segments make up a number or alphabet, as explained.

In the “void loop()” function, call different functions to be displayed along with a delay of one second. The delay of one second is achieved by “delay(1000);” This is necessary because, without a proper amount of delay, it’s hard for the human eye to see what is displayed.

Observation on pins of ESP8266

Debugging the Connections of NodeMCU to SSD

If your code is not properly uploaded in NodeMCU, try to unplug the D8 of NodeMCU while uploading the code. And reconnect this pin after uploading. You need not make any changes to the code while doing this.

Working of Seven Segment Display with NodeMCU for the code written

After making the circuit connections and uploading the code (you can see the onboard LED blinking periodically), the Seven Segment Display should start displaying numbers from “0” to “9” and start displaying alphabets from “A” to “F” after “F” it loops back to “0” and this continues till the power is disconnected. 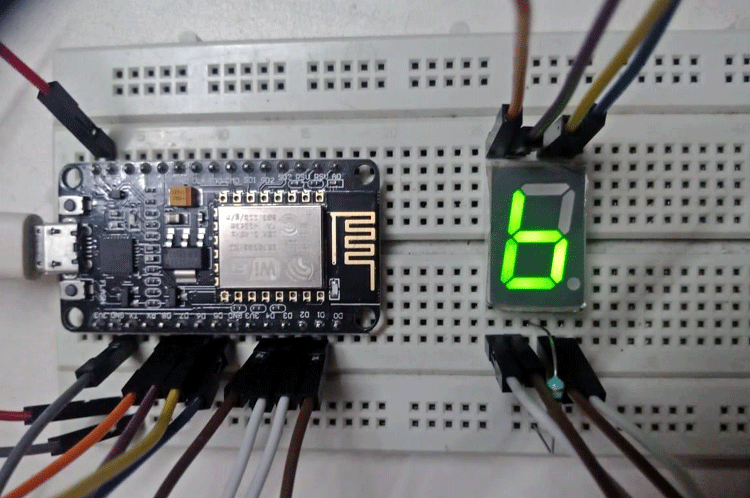 By learning how to use SSD with NodeMCU, the first step towards building thrilling projects has been taken. Here, the basic working principle of SSD is outlined, types of SSD are learned, programming NodeMCU is done. 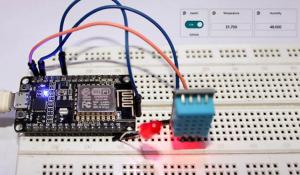