In this tutorial we are going to interface a rotary encoder with ATmega8 microcontroller.  ATmega8 is atmel's microcontroller series designed for embedded applications. Rotary encoder is used to know the position of movement and angular movement of a motor or axis. It’s a three terminal device usually, with power and ground pin counts to five. A rotary encoder module is shown below. 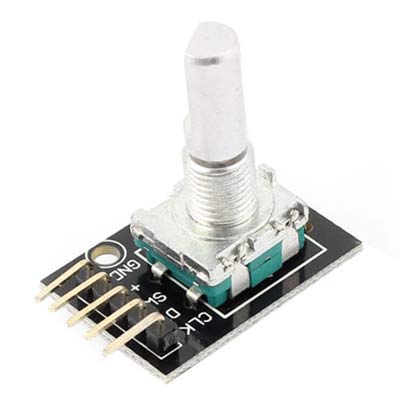 The pins of a rotary encoder are:

The ENCODER provides pulses representing the change in the shaft position for the systems to understand. Consider a ROTATORY ENCODER is powered up and the shaft is moved.

As shown in above table, consider the shaft is moved clock wise. With this there will be Falling Edge at the A terminal then at B terminal.

Consider the shaft is moved Anti clock wise. With this there will be Falling Edge at the B terminal then at A terminal.

This edge will occur once for 360/20 = 18 degrees (This is for a Encoder with 20 position, this changes from type to type, higher the count greater the accuracy).

With both above conditions, we can get direction and degree of rotation. Thus we get required parameters for getting the position of a shaft.

The capacitors here are for neutralizing the contact bouncing effect in ENCODER. Without those capacitors there will be some serious problems in position reading.

When the shaft is moved there will be time difference between two output pins output. The ATMEGA8 will recognize this time difference for clockwise of Anti clock wise rotation.

If the rotation is clockwise the binary count is incremented by one, and this count is shown in LED port as shown in figure.

Remember here we are not setting any fuse bits of atmega8, So the controller will be working on 1Mhz default internal crystal.

Working of interfacing rotary encoder with ATmega8 microcontroller is explained in below code.

// increment binary count if count is less than 255

// if binary count is greater than 0 decrease count by 1 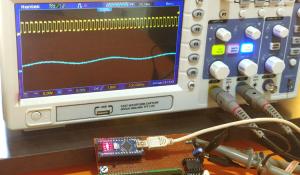 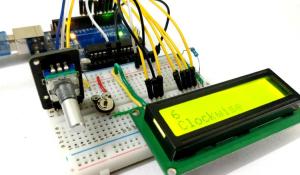 What is Rotary Encoder and How to Use It with Arduino 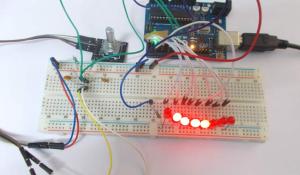