Indian Government along with the automobile sectors is trying hard to achieve their realistic goals of having 30% Electric vehicles on road by the year 2030. Despite the subsidies and regulations made by the government this doesn’t seem to work so far because EV’s on Indian roads have not received much appreciation from public in general. Looking for the reason, everything boils down to two things, which is the poor range and longer charging time associated with electric vehicles. Unlike IC vehicles the rides on EVs have to be planned because you can’t charge your vehicle on the run…… But! Wait a minute. What if I said it is possible to charge your EV even while you are driving it? No I am not talking about the solar or regenerative system here. I am talking about a real charger that can be buried under the roads to charge your EV wirelessly as you drive on it. Excited right?

This is exactly what “Wireless Vidyuth”, a start-up from Bangalore is currently working on. The company, co-founded by Tetiana Skupova (Tania) and Nagendra R Gouthamas is currently working on static wireless chargers and is soon to move into dynamic wireless chargers for EV. Excited by its plan, CircuitDigest approached the duo with few questions and their answers are as follows.

1. How was Wireless Vidyuth formed and how did it get off the ground?

Tania: Being interested in Renewable Energy I was looking for something exciting to work on, something that could change our life for the better. This was when I met Nagendra, our chief power electronics engineer at Wireless Vidyuth. He actually reached me through LinkedIn after watching one of videos on Insky Energy project, at which as well I am the co-founder. When I heard how he explains his ideas I noticed how passionate and dedicated he is to work on this and get it done. But he didn’t have a broader picture on how to develop the idea and make business out of it. So, I started to learn more about the project and Nagendra introduced me technical aspects and documents. That is how our journey started for Wireless Vidyuth.

Today we have put together a dedicated team of 10 people at our Bangalore office, which are currently working on our second prototype model.

2. What stage is Wireless Vidyuth currently at? Has it received any funding?

Tania: Right now we have completed our first prototype model and are working on the second one. We are also planning to test it practically at few places in India about which Nagendra will speak on later. I believe that we will increase trustworthiness to our technology when we will be able to demonstrate its efficiency with our second prototype. On that stage we will be able to persuade stakeholders that our technology outperforms our competitors in terms of price and efficiency. So we are intended to involve stakeholders and invite investors to fund our project after finishing and testing the second prototype.

3. What is the idea behind Wireless Vidyuth?

Nagendra: The idea of wireless power flashed from the great scientist and inventor, Nikola Tesla. He is like the father of all Wireless Technologies in today’s world. After completing my engineering, I started searching for the companies who were working on wireless power technologies, which is my passion from engineering days. But then I came to know that there is no company in India which is working on wireless power, so I started searching for potential partners who can take my idea to the next level.  This is how I met Tania. Initially, I had bigger plans for building back a Wardenclyffe tower (The Tesla Tower) and wireless power system of electricity generation. Together we chose the approach “Think Big, Start Small”.  So we decided to begin with a smaller idea and build a high frequency wireless power transmission system by resonant inductive coupling for static charging of electric vehicles. This system can be used for static wireless charging of Electric Vehicles. Once this is achieved we will also be moving into implementation of Dynamic charging.

4. What are the types in wireless chargers that are used with EV?

Nagendra: There are two types of wireless chargers for EV. One is the inductive coupling, which we will be using, and the other is Microwave power transmission. Under inductive coupling we will have static chargers and dynamic charging systems. The static charger will transfer power when the vehicle is stationary, for instance, at a parking lot or garage. The transmitter on the charger will turn on only when the vehicle is detected and transmitting AC power will be picked by the receiver coil on the EV. The other method of inductive charging is the dynamic charging, with which we will be able to charge the vehicle even when it on the run by setting up a wireless charging corridor.

5. How far have you proceeded with your wireless chargers? When can we expect it in market?

Nagendra: As of now we have already built a small working prototype model which is version one. It can be used for a lesser power transmission capacity using the method of high frequency resonant inductive coupling. Now we are building our second prototype wireless charger with a higher power rating in the range of Kilo Watts that is around 2KW. It can work on normal household supply voltage of 230V with an efficiency of 90% to 95%, meaning the Q-factor of both the transmitter and receiver coil will be higher. It will just act like a transformer but without any core inside it. 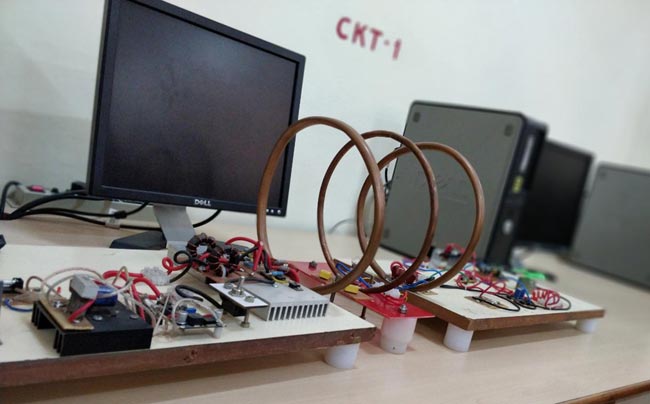 We approached the local electricity supply company BESCOM (Bangalore Electricity Supply Company) for supporting us with building a prototype for static charging. They expressed their interest in installing wireless charging units for both static and dynamic charging after testing our second prototype. We plan to set up our first wireless chargers at BESCOM’s office.

6. How will Vidyuth’s wireless technology boost the EV eco-system in India?

Nagendra: Recently the global scenario for EV changed a lot and there is a tremendous interest in creating EV ecosystem. Many developed countries implemented regulation aiming to switch completely to electric vehicles. India is also pushing hard on it. So, it is clear that the world is looking for a new solutions how to switch to EV faster and wireless charging is one of the technological innovations to address this issue.

The EV sector skyrocketed with billions of dollars investments, but current EV manufacturers still working hard to find efficient solutions to pain problems like range and charging time. Wireless charging might be the one. With dynamic chargers EVs can get charged on the run. It will also reduce the battery size of the EV by two thirds, making it much lighter.

7. What is high frequency resonant inductive coupling? How does this help in wireless power transfer?

Nagendra: Wireless electricity transfer works on the principle of “mutual inductance” between two coils. The transmitter coil is connected to the AC supply and the receiver coil is connected to the load. The load in our case will be the battery through the on-board charger. When the power is switched on to the transmitter, coil converts electricity into magnetic field, which is oscillating at a resonant frequency. Then the receiver coil at the receiving end converts this magnetic into electricity. The power can be transferred from transmitter coil to receiver coil based on faraday’s laws of electromagnetic induction. The current entering at one end and leaving at another end of coil is determined by dot convention. The core technology used in the wireless power transmission system is high frequency Inductive coupling through magnetic fields. An Impedance compensating circuit is also used to achieve maximum power transfer. 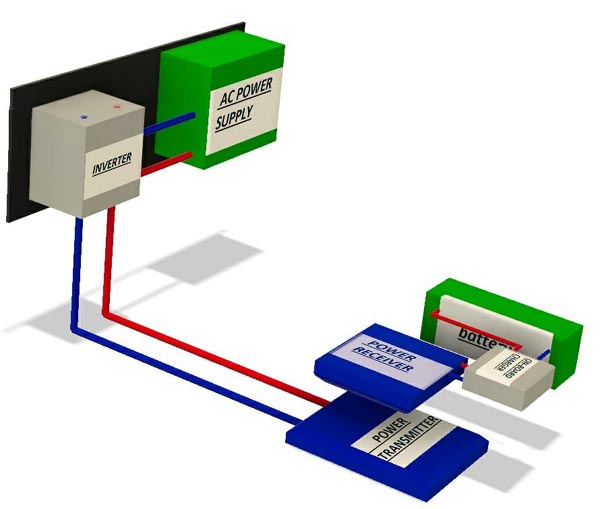 8. What are your plans for dynamic charging technology? Where are you planning this for?

Nagendra: In another six to seven months, after we are done our static charger prototype (model 2), we plan to install them at the parking lot of BESCOM corporate office in Bangalore. For the second run, we plan to develop dynamic charging by setting up a wireless charging corridor using segment control technology. It can be implemented at Vidhana Soudha in Bangalore, making it iconic place by having India’s first wireless charging corridor.

In these wireless corridors, the transmitter side of the charger will be buried in series under the ground. These transmitter pads will be energized only when the receiving pad comes on top of that particular transmitter. This improves power efficiency and gives a sense of safety, because when other IC powered vehicles or pedestrians walk on the road these transmitters will remain turned off.

9. Will Vidyuth wireless chargers be compatible with all EV’s? What will be the average cost associated with it?

Nagendra:  Every EV will come with its own specification of battery pack, which will be charged by its on-board charger. For the wireless chargers the transmitter part will remain the same for all vehicles, but some modifications has to be made on the receiver side based on the type of on-board charger in that particular EV. Once these receiver coils are fitted to an EV, it can make use of any wireless charger (transmitter) installed in the city. Our transmitting and receiving pad can be added as an accessory to the existing EVs.

10. Wireless Chargers are normally considered as inefficient and expensive, how Wireless Vidyuth is planning to tackle it?

Tania: We are working on making wireless charging affordable and competitive. We consider that the cost is not final and it will decrease with time. As we know, a lot of technologies were much more costly at the time they were just launched than we have it today. After adoption and technological improvement the price gets reduced. One example is costs for communication. Another one is solar panels… when they were introduced over 50 years ago it seemed to be very expensive. But now their price has become 200+ times less expensive than what it was at the beginning. Of course, our goal would be to make the technology affordable. So once we got the initial things set up we will work on making it cheaper. And for the dynamic chargers we are planning to work on different business models during the later stages of our project, so that we can tackle this problem of cost.

11. What are the technological barriers that Vidyuth currently faces? How are you planning to overcome it?

Nagendra:  Since Wireless Vidyuth is the only player in India, who is working on Wireless Power transfer for Electric vehicles, we do face some difficulties in getting things moving initially. Most components required for our project, like the high speed switching MOSFETS, were not available in India and finding a vendor for it was a problem. We had to import it from outside for out project.

Another technological hurdle in the wireless charger is to actually get the receiver coil in the EV to be aligned with the transmitter coil of the charger for maximum power transfer and we are currently working on improving it.