With the technological advancements taking place at super-fast speed, we can achieve everything that we could just imagine in the past! Chennai-based start-up, Agnikul Cosmos led by Moin SPM and Srinath Ravichandran is aiming to enable space accessible to everyone.

The IIT Madras incubated company is building India's first private small satellite rocket 'Agnibaan' which is currently in its developmental stage and we can expect the rocket to be launched by 2022. The launch vehicle will be capable of carrying up to 100 kg of payload to low Earth orbits up to 700 km with a plug-and-play engine configuration. Sounds exciting, isn’t it?

We got the opportunity to hear about the company, the team that’s working day in and day out to ensure the successful launch of the first commercial rocket, and more from Moin SPM who is the Co-Founder & COO at AgniKul Cosmos. He talked about the technical aspects, challenges faced in the manufacturing, supply chain, and testing phases. So, let’s begin!

Agnikul Cosmos was founded by us on the idea that getting to space should not be the hardest part of being a space-faring species. We wanted to enable quick & affordable space access through our launch-on-demand vehicle, Agnibaan.

We also saw there was a paradigm shift across all markets. In the last three decades, we have seen the IT industry, biotechnology, robotics all of these industries taking shape. Likewise, there was an opportunity for the space industry to position itself. With respect to the space industry,  it was only a government mandate to look at the space end of things. But we saw a change in the Western Hemisphere where SpaceX was trying to democratize space; and thus privatization of space started to happen across the globe. This was also one of the factors that persuaded us to start the Agnikul Cosmos.

The problem statement we saw was the satellites were shrinking and there was a demand for the rocket that could accommodate the shrinkage of satellites. But we saw the world focussing on bigger rockets. Previously, there used to be a kind of a big satellite that was used to be positioned at an orbit. But today, the market is progressing towards the constellation of satellites. This helped in diversifying their risk. This gave us an opportunity to think to meet this demand. We needed a rocket that could accommodate these sizes and types of payload. That is where we identified the need for a rocket such as this!

Q. Tell Us About Your First Rocket “Agnibaan”, What are the Major Ways in Which You have Reduced the Cost of Your Vehicle?

Agnibaan in Sanskrit means ‘rocket’. To reduce the complexities and cost of our vehicle, we incorporated multiple technologies that are available in today's world. For example, additive manufacturing (3D printing) plays a key role in our strategy. The rocket is also scalable so we would build the vehicle accordingly to the payload itself. There are multiple ways in which we are trying to reduce the cost of the vehicle itself. Instead of using expensive IMUs, we have had another option that could lead to a reduction in cost.

India has been a space-faring nation for nearly 50 years this has already developed the vendor ecosystem. This gives an edge in saving costs instead of importing.

There are companies that are building systems and subsystems from India. They have already proven credibility by flying their components into space. Some of our designs are done in house and we ask the vendors to manufacture those subsystems /components. The design cost is completely borne by us. So the cost drastically reduces.

Q. Building the Engine for Your Rocket Should be Crucial. Tell Us About Your Semi-Cryogenic Liquid Propulsion Engine “Agnilet” How Does it Differ from Other Small Rocket Engines?

We have two engines, Agnite and Agnilet Both are semi cryogenic engines. The USP lies in the fact that we manufacture these engines through additive manufacturing in a single piece. There are other companies as well that are focusing on 3d printing, but they are building in multiple parts, and they are trying to fuse them in one block. Our engine is different in such a way that the entire rocket engine is built one single piece. 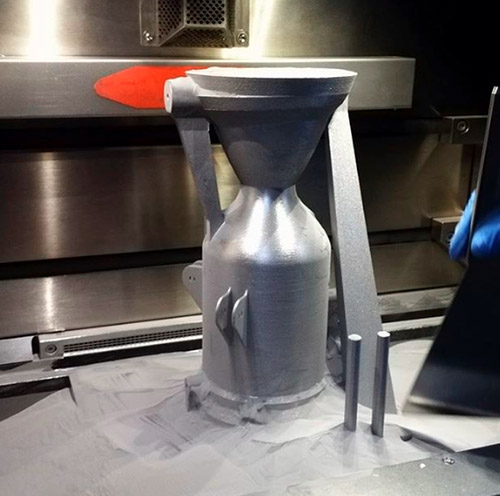 Q. Will all Future Rockets of Agnikul be 3D Printed or is the Company Planning on a Different Production Model?

We go with the concept of modular design where we can print the same engines. Our Engines are going to be 3D printed. In the future, we are also planning to have reusability, so our production rate might be different.

Q. After the Launch, How Long Would it Take for You to Prepare the Rocket Again for the Next Launch?

We have a modular design that will enable us to make the launch in two weeks. So the entire additive manufacturing time taken to produce one engine is less than 72 hours for us in one printer. We would be trying to automate the entire production process in such a way that we will be able to launch a vehicle every two weeks.

Q. Apart From Engines What Other Areas Require a Lot of Development Time and What Technical Difficulties Do You Often Face?

R&D has charm but it has difficulties too. Newer technologies however are proving helpful for us to solve the problem of developmental cost as well as time. For example, if we had to develop the same engine through conventional manufacturing, just the manufacturing itself would take around three months. The beauty is the time and the opportunity that additive manufacturing has given us in such a way that we’ve to reduce development time as much as possible and it gives us an opportunity to get the desired number of iterations. Also, here we have an opportunity to print or scrap it and then print it again if the iteration is not successful. This helps in the reduction of the development cost. Likewise, in avionics, we might not build a complete product initially, but we would test smaller kits and then scale up.

Q. Apart From the Engine, Where Do You Spend Most of Your Time?

Turbopump is one of the technological advancements that has been made in rocket science. Currently, This is where our time is completely dedicated to. We are using a motor that will drive the pump to push the propellants inside the engine. There is also an advantage once you’ve mastered the liquid engines, you could also use them for a longer time which could be used for our future missions. It has multiple components like motor, drives, battery and other things that need to align. Everything needs to be tested, and each component should have the reliability of itself, and then all have to be integrated to make a successful vehicle to fly.

Q. Being Among the Few Players in This Private Space Industry, What Kind of Challenges Do You Face?

We faced some challenges initially but things are changing for the better. Initially, the general industrial market we were looking for was not accommodating the space industry because of our expectations of precision and tolerances. But now people have started to accept the space industry, the opportunities and have understood that space could be a platform for other applications.

There were other difficulties too that we faced but thankfully those have been resolved too. Now we have a policy that is in our hand's things are better and we could complement ISRO as well. We want to Make in India for the world. That is exactly what we are targeting, being the first player specifically for the launch vehicles in India.

The technical difficulties were addressed as we were working within IIT Madras. We work out of the National Center of Combustion Research and Development. Having access to such academic institutions' ecosystems have actually proved helpful for us. Being a startup to afford such a huge infrastructure and doing this would have been really impossible. We see a lot of growth in the space ecosystem. When we started, there were four or five companies in the space industry, and today, there are approximately more than 20. So this is giving us a  boost about how things are happening.

Q. How Do You See the Aerospace Industry From a Market Perspective?

Many industries will be using space as a platform. There are pharmaceutical companies that are thinking about doing microgravity research for protein crystallization Likewise, there is another unconventional company that is interested in creating Fake Meteor Showers creating an effect of fireworks. Similarly, some companies keep data in space because storing data on the ground requires a lot of cooling infrastructure. This is free in space and the major expenditure is covered.

We see multiple industries trying to utilize space which is a good sign and there is the conventional space side of communications and Remote sensing. The big satellites have been broken down into small satellites and are formed as constellations. Considering all of these things, we can see a market that is currently trying to grow. We are also seeing space travel trying to become a reality and there are a lot of companies that are working towards this. Space exploration has been happening, where companies are trying to explore Mars and other planets as well. So we don't see this industry being saturated in the next for at least a couple of decades. It is a technological advancement for every country and is still growing.

Q. Tell Us About Your Team. How Have You Formed Your Team? Do You Find it Difficult to get Manpower or to get the Right Type of Skill in India?

The fundamental thing that we require or we look for in people is -  passion. If they have a passion they will create a mark for themselves. The fundamental part of building a rocket is integration. So we have a saying, it is not about being the world’s best aerodynamics engineer or the world's best propulsion engineer. Instead, you should be able to integrate your part with the other departments of rocket building. The person we look for should be capable of integrating with others.

We have a strength of around 60 people. The range is of people being post-doctorates to diploma levels. It’s a kind of mixed team.  Even age-wise, we have people who are as young as 21 years to people of age around 45 years. The team comprises people from different corners of the world but Indians who we think are best at integration.

Q. The Launch of Agnibaan is Expected to be in 2022, How has the Company Progressed with the Rocket, and What Stage is it in Currently?

Multiple engine tests have been done, the architecture has been frozen on the electronic side. The tanks for propellant storage have been tested for pressure and cryogenic temperatures. The first commercial flight would be in the latter part of 2022 and we would have a developmental flight before.