Road accidents are counted as one of the leading causes of unnatural deaths and the majority of the road accidents that take place are caused by human error. We all know that transportation automation reduces human errors. Vehicle automation is not enough instead, it is equally critical to establish safety assurance in the autonomous vehicle before being deployed on the road. With the urge to tackle the challenge of minimizing road accidents, Sirab Technologies started working on SAE Level 4 solutions for automated vehicles like buses and trucks.

Mr. Surya Satyavolu, the founder of Sirab Technologies shared his viewpoint on the problem of road accidents and how the company is aiming to provide the best automated transportation solutions that will offer a significant impact on society by improving the safety of travel and road lane capacities by 5 times.

Mr. Surya is an electrical engineer who holds a B.Tech degree in Electrical Engineering. Subsequently, he went to the US and obtained an MSEE in DSP and Digital Communications. He worked for several years as an embedded system and software engineer in several companies and startups. Most of his initial work was on communications products like Cellular Chipsets, Cable modems, 802.11 wireless, and Multi-Service Routers. From 2010 onwards, he worked on Safety and Security Critical Operating Systems for Avionics and Defense Applications. There the idea of doing automated driving with a correct architecture and safety certificate came into his mind. Scroll down to read on as to what Mr. Surya has to say about his venture.

Q. Tell us about your company, Sirab Technologies. How long has it been since inceptions and what problems does the company aim to solve?

Traffic congestion is a global problem, be it in the developed world or emerging economies such as India. While the developed world may have better road infrastructure and a relatively lower number of accidents, due to higher penetration of personal cars, traffic congestion and safety issues are still a major un-addressed problem. We believe automated transportation when done right can address these issues. The key point is doing it right, without which automation may add to the existing problem than addressing it. Sirab Technologies Transportation Pvt Limited got incorporated in April 2018 and subsequently, the team is an alumnus of IIT Madras got incubated at IIT Madras Incubation Cell. 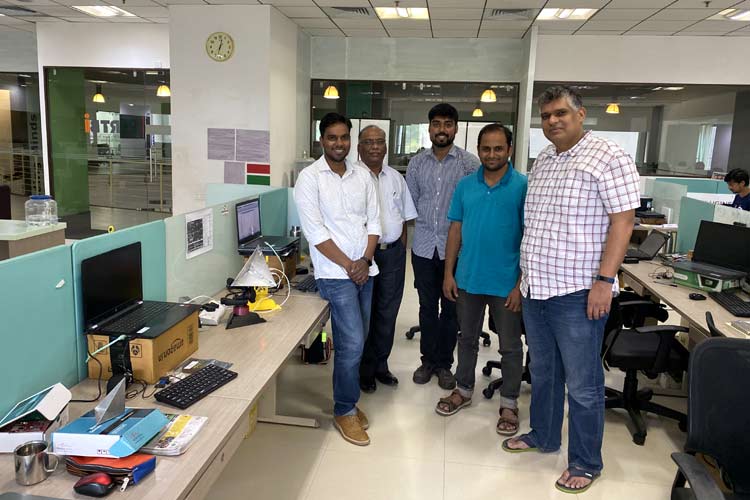 Our team comes with deep expertise in developing safety and security-critical systems for aviation, railways, and are taking a patented, high-reliable and functionally safe approach to the automated vehicle guidance system. We have been working on understanding the challenges and identified an automated guidance system that better safer, modular, system design with a capitally less intensive and operationally less expensive approach that addresses the core problems.

Q. Sirab Technologies has developed a Level 4 automated Vehicle Solution for Buses and Trucks, tell us about the technology behind it.

Sirab Technologies takes a modular and system engineering approach to solve the challenges in transportation and automated vehicle space. With a key focus on the early deployment of automated vehicles and realize the benefits of automation, we have extensively studied the development of high-speed rail Shinkansen network in the 1950s-60s as well as the development of safety systems in the aviation industry. We believe to realize benefits from vehicle automation, it is essential to take a systems engineering approach and have a good understanding of not just vehicles, but also the environment in which it is anticipated to be deployed, potential scenarios that are possible in those environments that critical for safety and have a fail-safe method to mitigate those scenarios.

The core foundational architecture is based on automotive radar and Inertial Measurement Unit (IMU) for high reliable vehicle lane-keeping and platooning, and the core algorithms have been developed and simulated. Our approach relies on optimized radar-based on-board guidance systems in the vehicles and leverages dedicated lane infrastructure with High Radar Cross Section (RCS) passive metal objects along the wayside that allow high assurance lane-keeping and vehicle platooning. Prototypes using radar, IMU and high RCS reflectors have been developed and further developments are being carried out. We are closely working with a couple of international commercial vehicle OEMs for vehicle integration and testing and deploy automated buses in airports to offer an efficient and reliable mobility option such as people movers within airports.

Q. Why did ​Sirab choose Radar for its solution? What is your take on Lidar for Automated Vehicles?

Radar systems that use the millimeter-wave spectrum are versatile and well-understood systems to detect objects and estimate range, i.e distance, and relative speed. Using radars for a guidance system are well-understood principles in aerospace, aviation as well as in maritime environments. The biggest advantage is also that is ideal for all weather conditions and the deterioration of performance if there is any is negligible compared to camera or Lidar systems. Radar detection is optimal for building a guidance system as it provides the right measurements in the form of lane positioning and Doppler measurements needed for calculating vehicle guidance accurately.

Q. In automated transportation solutions, safety assured with high reliable guidance system is quite challenging. In what way is Sirab Technologies contributing towards solving this problem?

Safety assurance is a design level problem that has been studied at much more depth in certain domains like Aviation and Railway systems. Federal Aviation Administration (FAA) under the U.S. Department of Transportation quite succinctly summarizes it in “Overarching properties of the correctness of Intent, Implementation, and Acceptability”. Our unique design achieves those by achieving all three with a fail-safe design philosophy. High reliability of our foundation functions of lane-keeping and platooning form the basis for achieving the correctness of intent and implementation. Additionally, our modular approach makes it possible to assess the system for safety assurance from internal reliability metrics and external risk factors.

Q. Being one of the few Autonomous Driving solution providers in India what difficulties do you face here for developing the technology?

Each market offers its own unique challenges. Ideally, countries in tropical regions would be a good location to deploy automation as they offer uniform weather with low feasibility of snow, fog, etc. Having said that with the right approach and designing a good operational domain where the automated vehicles are expected to operate, i.e. place where we can expect good control on the infrastructure, it is certainly feasible to deploy these systems. Fortunately, in India, we have identified many such opportunities in airports, bus rapid transit corridors where these can be deployed as an early market. Ports and industrial complexes are also good locations. The level of service from these systems would be much better than say an urban metro transit system and at a CAPEX and OPEX costs that significantly lower than the metro systems.

We are currently with one large airport operator that has committed a letter of intent to do a large airport people mover project. Over the last couple of years, we have received encouraging support and interest from multiple departments both in central government and state government. We have been selected for the Government of India grant for our product development efforts, signed a Memorandum of Understanding with Government of Andhra Pradesh to explore similar opportunities in the state. As a new technology that involves safety systems, there will be challenges that are not insurmountable and we are actively engaging with all relevant stakeholders in the country.

Q. Autonomous driving being relatively a new technology, how did you manage sourcing hardware for your solutions here in India?

We actively support Make in India initiatives and aim to source and manufacture the majority of systems required for product development in India. As for hardware devices such as radars, the market is yet to fully evolve in India, and these components have to be sourced internationally.

Q. What is the most challenging part of developing an Autonomous Driving Solution? How far are we from SAE Level 5?

It would certainly take a significantly long time, possibly more than a couple of decades to reach SAE Level 5, as currently defined by SAE. However, we believe we can realize almost all benefits from vehicle automation with Level 4 systems itself. To provide an analogy, a fully unmanned urban metro system is comparable to Level 4 automation. It is in fact called Grade of Automation 4. There is a huge value that can be derived at the Level 4 stage itself while making a huge impact in alleviating traffic congestion and safety challenges. There is another misconception that automated driving will lead to loss of driving jobs. While that may be a distant possibility in the Level 5 scenario which itself is more than decades away, development and deployments in SAE Level 4 kinds of systems would not only create jobs just for high-skilled professionals but also for semi-skilled personnel.

Q. What is the current state of your technology? How are you planning to take it to the market?

The core algorithms have been developed and simulated and the product is ready for prototyping and does system integration on the vehicle. We have already identified a couple of large opportunities to do automated bus-based Airport People Mover projects, both in India and internationally. We believe closed and controlled environments such as airports, ports are the earliest adopters for high automation before scaling to larger operating domains such as bus rapid transit corridors.

Q. Who are your potential customers and how do you see the market for Autonomous Vehicle solutions in India?

Our patented guidance solution for lane-keeping and platooning will be a TIER 1 product to be integrated by vehicle OEMs. The guidance system itself is vehicle agnostic, i.e. suitable for both commercial vehicles and light/personal vehicles depending on Operational Design Domains where vehicles expected to be deployed. We foresee our infrastructure components being deployed by the infrastructure operators like the airport operators, ports or BRTS. We see tremendous opportunity for autonomous vehicles solutions like ours which offer solutions to some of the key pain points being faced by road transport in India like Road Safety and Congestion. The key is doing it cost-effectively from both CAPEX and OPEX while also delivering the promised benefits. Our core solutions enable both.

Q. What are the future plans for Sirab Technologies in terms of growth and revenue?

We believe, globally opportunities in Automated vehicle-based People Mover systems such as in airports, bus rapid transits, ports themselves offers hundreds of billion-dollar opportunity. The beauty of the approach that we have taken is that once the system is designed and standardized at one location, it is can be replicated in other geographies and highly scalable with almost no additional technical barriers. This is a far better approach than the current approaches being adopted and tested where there is a significant requirement such as mapping data generation, learning specific geography, etc. to commercialize automated vehicles.