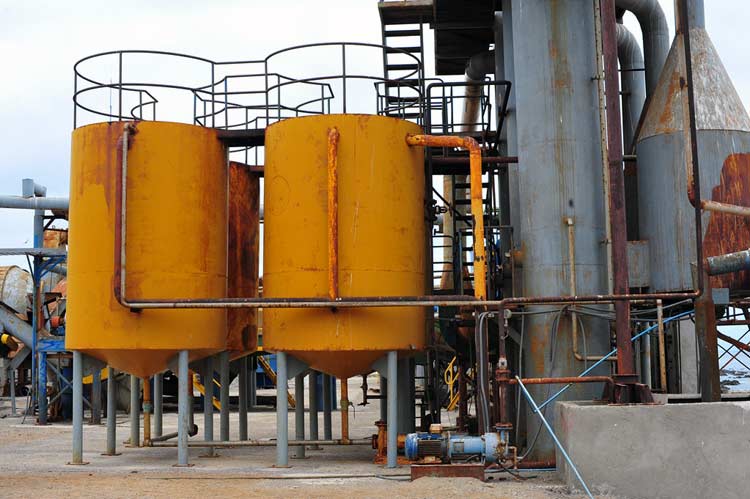 There are certainly quite a few cases of inadvertent tripping in cement plants, steel plants, fertilizer plants, FMCG and other industries that many Electrical Engineers witness at a certain point of time. Such scenarios occur in the majority of industries, not for the reason that the protection plan of these industries is not properly coordinated but because changes in the electrical system take place on a day-to-day basis. Pinned below is the SLD of a Cement Plant which failed due to poor Relay Coordination, we will discuss the same in this case study. 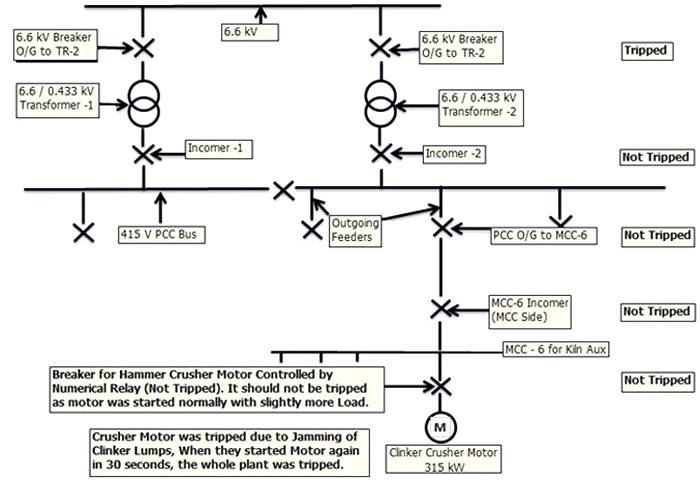 During one instance, the Clinker Hammer Crusher Motor tripped in overload due to jamming. It was after 30 seconds that the control room gave the command to start the crusher again as it was observed in the past that jamming could be cleared by heavy starting torque but this time unexpectedly when the command was given to crusher motor, the entire plant tripped.  It was unexpected because the Clinker crusher jamming happens at least 3 to 4 times in a year and the plant was running for the last 4 years and such co-ordination problems never occurred. This issue had arisen for the second time in the last 3 months and our team was called to address the issue.

The very first thing that we did was to check whether the complete electrical system was properly coordinated or not and it was found that the system was well coordinated since the commissioning stage and they had the records for the same.

Thereafter, we inquired about any modification done in the distribution team like replacing the existing motor with less KW or adding any extra load on that MCC because of any process requirement. They told us that a 37 kW old compressor was removed as it was no longer being used and one 18- kW compressor was shifted from another MCC to the present MCC as the load on that MCC was around 100 %. They also told us that one more change was made. A 75 kW high-pressure pump that was used for breaking jamming in Kiln was installed as per the requirement of process/production. Therefore, a total of around 217 kW was added and the settings were manually adjusted according to the MCC incomer and PCC outgoing panel.

Knowing all these details, we concluded that the reason for such a problem was that there was a clinker lump and the clinker crusher motor was tripped.  Based on the experience, they took action and restarted it again after 30 seconds but as the whole plant was running except clinker crusher, MCC was already at 80% load and when the 315 kW motor started, the starting current was around 4 to 5 times of motor FLC. The total current crossed the threshold of that relays and they forgot to make changes in the setting of 6.6 kV Side as mentioned in SLD. This made the complete PCC bus dead and the total plant was completely tripped and it took around 2 hours to start back.

It was a 5000 TPD plant and this breakdown cost the plant around 410 tons of clinker which is approximately 500 tons of cement (10000 Bags of cement). It turned around to be a loss of INR 2.5 to 2.8 millions in just 2 hours (Total of INR 5 – 5.5 million for 2 breakdowns). Besides, the time, all the efforts put in for the modification to improve stability and efficiency went waste. Ideally, the MCC-6 Incomer should have tripped and not the motor because the motor started normally with just the extra load on it.

Thus, it was concluded that to avoid such an issue which incurs heavy losses, each time any kind of big modification is made to the electrical distribution system viz. adding load or adding any source, the complete relaying and protection should be coordinated again.