A close loop system is also known as feedback control system and this type of system is used to design automatically stable system at desired output or reference. For this reason, it generates an error signal. Error signal e(t) is a difference between the output y(t) and the reference signal u(t). When this error is zero that means desired output is achieved and in this condition output is same as a reference signal.

For example, a dryer is running for a several times, which is pre-set value. When dryer is turned ON, timer starts and it will run until timer ends and give output (dry cloth). This is a simple open loop system, where output is need not to control and not require any feedback path. If in this system, we used a moisture sensor which provide feedback path and compare this with set point and generates an error. Dryer runs until this error is zero. It means when moisture of cloth is same as set point, dryer will stop working. In open loop system, dryer will run for fixed time irrespective of clothes are dry or wet. But in close loop system, dryer will not run for fixed time, it will run until clothes are dry. This is the advantage of close loop system and use of controller.

PID Controller and Its Working:

So what is PID controller? PID controller is universally accepted and most commonly used controller in industrial application because PID controller is simple, provide good stability and rapid response. PID stands for proportional, integral, derivative. In each application, coefficient of these three actions are varied to get optimal response and control. Controller input is error signal and output is given to the plant/process. Output signal of controller is generated, in such a way that, output of plant is try to achieve desired value.

PID controller is a Close loop system which has feedback control system and it compares the Process variable (feedback variable) with set Point and generates an error signal and according to that it adjusts the output of system. This process continues until this error gets to Zero or process variable value becomes equal to set point. 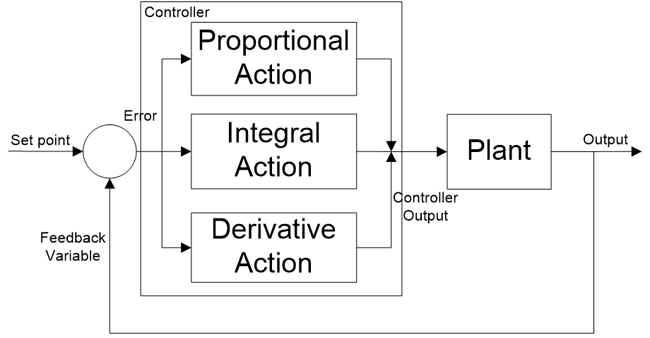 *We will learn about Proportional, Integral and Derivative actions later in this article.

PID controller is a combination of three terms; Proportional, Integral and Derivative. Let us understand these three terms individually.

Where Kp is proportional gain factor. 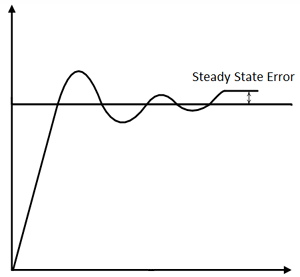 Here, the resulting error is multiplied with proportionality gain factor (proportional constant) as shown in above equation. If only P controller is used, at that time, it requires manual reset because it maintain steady state error (offset).

Integral controller is generally used to decrease the steady state error. Term ‘I’ is integrate (with respect to time) to the actual value of the error. Because of integration, very small value of error, results very high integral response. Integral controller action continues to change until error becomes zero.

Where Ki is a  proportional gain factor. 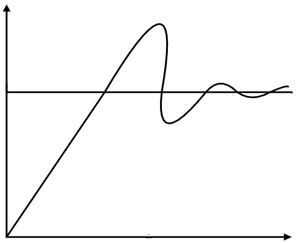 Where Kd is a proportional gain factor. 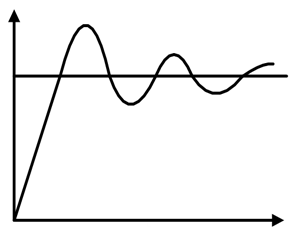 This is a combination of P and I controller. Output of the controller is summation of both (proportional and integral) responses. Mathematical equation is as shown in below; 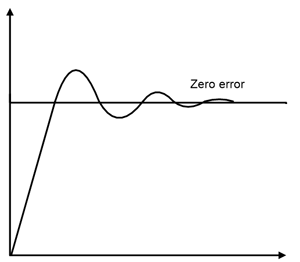 This method is also known as Cohen-Coon tuning method. In this method first generate a process reaction curve in response to a disturbance. By this curve we can calculate the value of controller gain, integral time and derivative time. This curve is identified by performing manually in open loop step test of the process. Model parameter can find by initial step percentage disturbance. From this curve we have to find slop, dead time and rise time of curve which is nothing but the value of kp, ki and kd.

In this method also first set the value of ki and kd zero. The proportional gain (kp) is increase until it reaches at the ultimate gain (ku). ultimate gain is nothing but it is a gain at which output of loop starts to oscillates. This ku and the oscillation period Tu are used to derive gain of PID controller from below table.

PID controllers are designed based on the microprocessor technology. Different manufactures use different PID structure and equation. Most common used PID equations are; parallel, ideal and series PID equation.

In parallel PID equation, proportional, integral and derivative actions are working separately with each other and combine effect of these three actions are act in the system. Block diagram of this type of PID is as shown below;

In ideal PID equation, gain constant kp is distributed to all term. So, changes in kp affects all other terms in the equation.

In series PID equation, gain constant kp is distributed to all terms same as ideal PID equation, but in this equation integral and derivative constant have an effect on proportional action.

The I-V characteristic of a PV cell depends on temperature and irradiance level. So, operating voltage and current will change continuously with respect to change in atmospheric conditions. Therefore, it is very important to track maximum power point for an efficient PV system. To find MPPT, PID controller is used and for that current and voltage setpoint is given to the controller. If atmospheric conditions will change, this tracker keeps voltage and current constant.

PID controller is most useful in power electronics application like converters. If a converter is connected with system, according to change in load, output of converter must change. For example, an inverter is connected with load, if load increase more current will flow from inverter. So, voltage and current parameter is not fix, it will change according to requirement. In this condition, PID controller is used to generate PWM pulses for switching of IGBTs of inverter. According to change in load, feedback signal is given to controller and it will generate error. PWM pulses are generated according to error signal. So, in this condition we can get variable input and variable output with same inverter.