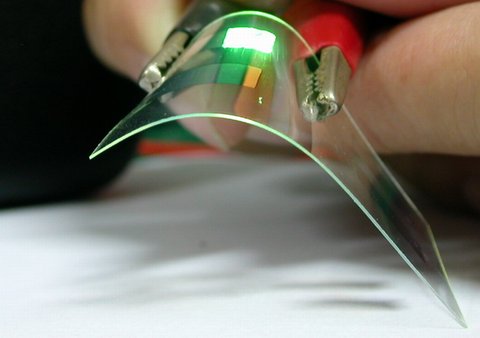 Let’s dream about a high definition television that is even less than a quarter inch thick, curved and about 80 inches wide. Moreover, it consumes lesser power than your normal TV set and it can be rolled up if you don’t want to use it. You can also carry that TV around wherever you like. What if we could have a display monitor inbuilt in our clothing? Does it look real or just a dream? Well, these devices can be existent in near-term using the recent technology of OLEDs.

Abbreviated for Organic Light Emitting Diode, OLED is a recently developed display technology in which a layer of organic compound emits light when electric current runs through it along with a combination of filters and color refiner to produce high definition images. It packs in carbon based sheets between two charged electrodes, comprising of a metallic cathode and a transparent anode. The organic based films surround hole transparent layer, emissive and electron transport layer inside it. When current is applied to the OLED cell, the positive and negative charges remerge in the emissive layer and creates an electro luminous light. OLED displays are emissive devices and they work on emitting light rather than modulating or reflecting the light.

Although "LED" and "OLED" both uses "light-emitting diode" technology the design process of each is actually quite different. While LED displays use an array of LEDs as the backlight on traditional LCD displays, in OLED displays, the organic layer creates its own light source for each pixel. This results in an improved clarity and color of images.

A glimpse on OLED technology

The sheets used in OLED devices are prepared from organic carbon based materials that illuminates when current is applied through them. They are much more efficient and simpler to use than LCDs as they are not dependent upon backlight and filters. They provide a beautiful picture quality with amazing clarity. They also provide brilliant colour features; have a relatively fast response rate and a wider range of viewing angles. They are also used for making OLED lightings.

This technology was made-up in early 1980s. It was further developed to replace LCD technique because OLED technology is comparably brighter, thinner and lighter than LCDs. They also consume lesser power than LCDs and offers higher contrast features. The most attractive advantage that it possesses over LCDs is that they are comparably cheaper to manufacture and hence it is cost effective.

OLED technology works on a very simple principle. Whenever a current is applied to the electrodes, an electric field gets developed around it as a result, the charges start moving in the device. Electrons escape from the cathode and holes move from anode in reverse direction. The electrostatic force brings the electrons and the holes together and they form a photon which is a bound state of electron and hole. This recombination of charges develops photon with a given frequency that is given by the energy gap that gets formed between the LUMO and HUMO levels of the emitting molecules. This electrical power that is applied to the electrodes gets converted into light that is radiated out from the device.

Different materials are used to produce different colours of light and the colours combine to form a white source of light. Generally, the anode material is made up of Indium tin oxide because it is transparent to the visible light and has a high work function. The material helps to promote injection of holes into the HOMO level of organic layer. Materials like barium and calcium are commonly used for making cathode electrodes as they have lower work function and they can promote injection of electrons into the LOMO level of organic layer. These materials also required to be coated by metals like aluminium as they are very reactive in nature and often need a protective sheet over them.

The basic structure of an OLED contains a cathode for introducing electron, an emissive layer and an anode for removing electron out of it. Although the modern OLEDs contain many more layers, yet the elementary functionality remains the same in all the types of OLEDs. There are several types of OLED materials that are used in manufacturing of OLED. The most fundamental division is of small molecule OLEDs and large molecule OLEDs. All the commercially utilised OLEDs are small molecule based, which is called SMOLED. They perform better and efficiently. The emitter materials that are used in OLEDs are fluorescent or phosphorescent. The fluorescent materials have a longer lifespan although they are less resourceful than the later one. Most of the OLEDs use phosphorescent materials as they provide better services and longer run.

AMOLED and PMOLED are the terms related to the display of an OLED. A PMOLED has limited range and resolution although they are economical than AMOLED. These displays are very complicated to manufacture but they are efficient to use and can also be given larger dimensions. PMOLED displays are utilized in producing smaller devices while AMOLED displays are used in television sets, tablets and smartphones.

OLED technology is used in commercial applications of mobile phones, digital media players, car radios, digital camera, television etc. Portable displays are used in the mechanism so the lower lifespan is no more an issue in this purpose. It can also be used for all-purpose illumination as well as for displays and rear light sources in LCD displays, traffic signals, emergency signals or automotive applications.

OLED technology has really opened a widen gates for many advancements and developments in the field of machinery, tools and electronic equipments. It offers following benefits:

With the countless advantages, we have some flaws and drawbacks of the technology as well that are mentioned hereunder:

The developers have tried making positive changes in these drawbacks and thus have developed OLEDs having longer lifespan. Red and green OLED has lifespan of 46000 to 230000 hours while blue OLEDs have lifespan of around 14000 hours. Larger OLED panels have also been produced.

Although the technology has taken a great leap in the recent times, there are still several challenges that are being faced by OLED industries. They are listed as follows:

The recent developments in OLED technology

OLED technology has been widely used in recent years and it is quite successful as per the study. Samsung is the leading producer of AMOLED displays today. It is making over 200 million of displays every year and is about to enlarge the production capability of their manufacturing very soon. It is focussing on smaller displays of 5-10 inch which are used in smartphones and tablets these days.

LG is also manufacturing OLEDs of larger display panels. It has used OLEDs for producing Television units of 55 to 77 inch display.