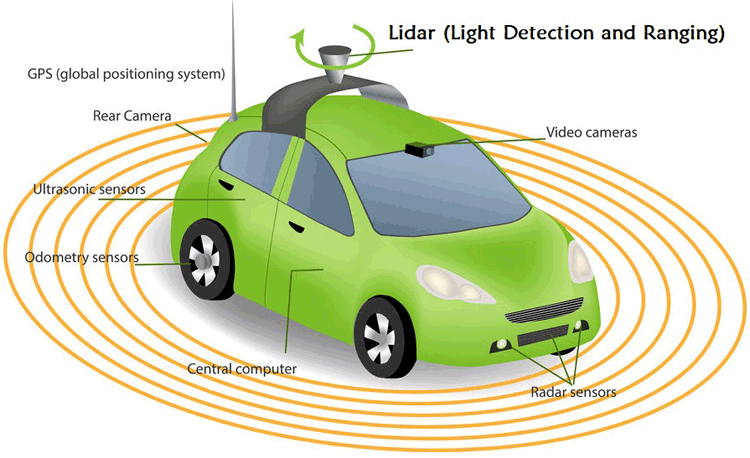 Driverless Cars which were one of the biggest technological fantasy of the 1990s (fueled by earlier movies like “The Love Bug” and “Demolition Man” ), are a reality today, thanks to the huge advancement made around several technologies especially LIDAR.

LIDAR (stands for Light Detection and Ranging) is a ranging technology that measures the distance of an object by firing beams of light at the object and use the time and wavelength of the reflected beam of light to estimate the distance and in some applications (Laser Imaging), create a 3D representation of the Object.

While the idea behind laser can be traced to the work of EH Synge in 1930, It wasn’t a thing until the early 1960s, after the invention of laser. Essentially a combination of laser-focused imaging with the ability to calculate distances using the time of flight technique, it found its earliest applications in Meteorology, where it was used to measure clouds, and in Space, where a laser altimeter was used for mapping the moon’s surface during the Apollo 15 mission. Since then, the technology has improved and has been used in diverse applications including; detection of seismic activities, oceanography, archeology and navigation to mention a few.

How Does LiDAR Work

LIDAR uses light across different wavelengths including; ultraviolet, visible, or near infrared light to image objects and its, as such, able to detect all kind of material compositions, including; non-metals, rocks, rain, chemical compounds, aerosols, clouds and even single molecules. LIDAR systems could fire up to 1,000,000 light pulses per seconds and use the time taken for the pulses to be reflected back to the scanner to determine the distance at which objects and surfaces around the scanner are located. The technique used for the distance determination is known as time of flight and it’s equation is given below.

In most applications, other than just distant measuring, a 3D map of the environment/object at which the light beam was fired is created. This is done via continuous firing of the laser beam at the object or environment. 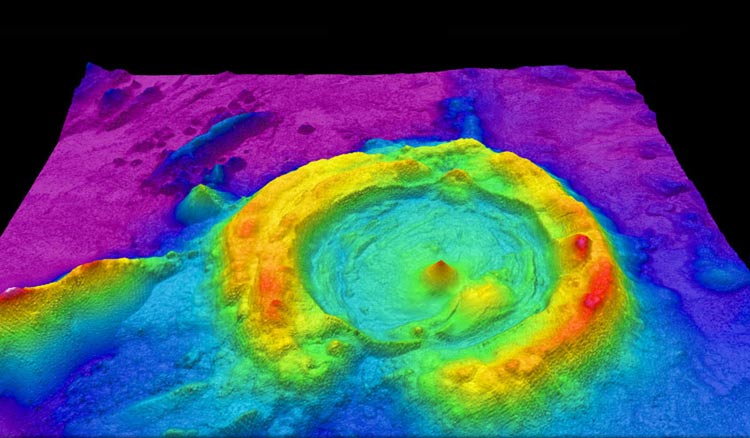 It is important to note that, as opposed to the specular type reflection obtainable in plane mirrors, reflection experienced in LIDAR systems is backscattered reflection as the light waves are diffused back through the direction where they came. Depending on the application, LIDAR systems use different variations of backscattering including Rayleigh and Raman scattering,

Components of a LIDAR System

A LIDAR system typically comprises of 5 elements which are expected to be present irrespective of variations due to application. These main components include:

The Laser serves as the source of the energy for the light pulses. The wavelength of the laser deployed in LIDAR systems differ from one application to another due to the specific requirements of certain applications. For instance, Airborne LiDAR systems use 1064 nm diode pumped YAG lasers whilst Bathymetric systems use 532nm double diode pumped YAG lasers which penetrate water (up to 40 meters) with much less attenuation than the airborne 1064nm version. However, Irrespective of the applications, the lasers used are usually of low energy to ensure safety.

Scanners are an important part of any LIDAR system. They are in charge of projecting laser pulses to surfaces and receiving back the reflected pulses from the surface. The speed at which images are developed by a LIDAR system is dependent on the speed at which the scanners capture the backscattered beams. Irrespective of the application, the optics used in a LIDAR system must be of high precision and quality to obtain the best results especially for mapping. The type of lenses, specific glass choice, along with the optical coatings used are major determinants of the resolution and range capabilities of the LIDAR.

Depending on the application, a variety of scanning methods can be deployed for different resolutions. Azimuth and elevation scanning, and dual axis scanning are some of the most popular scanning method.

A high capacity processor is usually at the heart of any LIDAR system. It is used to synchronize and coordinate the activities of all the individual components of the LIDAR system ensuring all components are working when they should. The processor integrates the data from the scanner, the timer (if not built into the processing subsystem), the GPS and the IMU to produce the LIDAR point data. These elevation point data are then used to create maps depending on the application. In Driverless Cars, the point data are used to provide a real-time map of the environment to help the cars with obstacle avoidance and general navigation.

With light travelling at a speed of about 0.3metres per nanoseconds and thousands of beams usually reflected back to the scanner, the processor is usually required to be of high speed with high processing capabilities. Thus, the advancements in the processing power of computing elements has been one of the major drivers of LIDAR technology.

Accurate timing is of the essence in LIDAR systems as the entire operation is built on time. The timing electronics represents the LIDAR subsystem that records the exact time a laser pulse leaves and the exact time it returns to the scanner.

It’s precision and accuracy cannot be over emphasized. Due to the scattered reflection, pulses sent out usually have multiple returns each of which needs to be precisely timed to ensure the accuracy of the data.

When a LiDAR sensor is mounted on a mobile platform such as satellites, airplanes or automobiles, it is necessary to determine the absolute position and the orientation of the sensor to retain useable data. This is achieved by the use of an Inertial measurement system (IMU) and Global Positioning System (GPS). The IMU usually comprises of an accelerometer, gyroscope, and a magnetometer to measure the velocity, orientation, and gravitational forces, which combined together, are used to determine the angular orientation (Pitch, roll and Yaw) of the scanner relative to the ground. The GPS on the other hand provide accurate geographical information regarding the position of the sensor, thus allowing for direct georeferencing of the object points. These two components provide the method for translating sensor data into static points for use in a variety of systems.

The extra information obtained using the GPS and IMU is crucial to the integrity of data acquired, and it help ensures distance to surfaces are correctly estimated, especially in mobile LIDAR applications like Autonomous vehicles and Air Plane based imagine systems.

While LIDAR systems can be classified into types based on quite a number of factors, there are three generic types of LIDAR Systems which are;

Differential absorption LIDAR systems (sometimes referred to as DIAL), is usually used in the investigating the presence of certain molecules or materials. DIAL systems usually fire laser beams of two wavelengths which are selected in such a way that one of the wavelengths will be absorbed by the molecule of interest whilst the other wavelength will not be. The absorption of one of the beams results in a difference (differential absorption) in the intensity of the return beams received by the scanner. This difference is then used to deduce the level of presence of the molecule being investigated. DIAL has been used to measure chemical concentrations (such as ozone, water vapor, pollutants) in the atmosphere.

Doppler LiDAR is used to measure the velocity of a target. When light beams fired from the LIDAR hits a target moving towards or away from the LIDAR, the wavelength of the light reflected/scattered off the target will be changed slightly. This is known as a Doppler shift - as a result, Doppler LiDAR. If the target is moving away from the LiDAR, the return light will have a longer wavelength (sometimes referred to as a red shift), if moving towards the LiDAR the return light will be at a shorter wavelength (blue shifted).

Some of the other classifications on which LIDAR systems are grouped into types include:

Types of LiDAR based on Platform

Using platform as a criteria, LIDAR systems can be grouped into four types including;

These LIDARs differ in construction, materials, wavelength, outlook and other factors which are usually selected to suit what works in the environment for which they are to be deployed.

Types of LIDAR Based on Type of Backscattering

Due to its extreme accuracy and flexibility LIDAR has a wide number of applications, in particular, the production of high-resolution maps. As well as surveying, LIDAR has been used in agriculture, archaeology, and in robots as it’s currently one of the major enablers of the autonomous vehicle race, being the major sensor used in most vehicles with the LIDAR system performing a role similar to that of the eyes for the vehicles.

There are 100s of other applications of LiDAR and will try to mention as many as possible below. 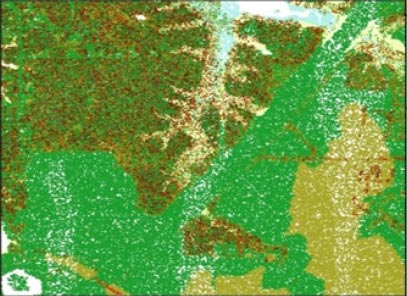 LIDAR like every other technology has its shortcomings. The range and accuracy of LIDAR systems are badly affected during bad weather conditions. For example, in Foggy conditions, a significant amount of false signals are generated due to beams being reflected by the fog. This usually leads to the mie scattering effect and as such, a bulk of the fired beam doesn’t return back to the scanner. A similar occurrence is experienced with rain as rain particles cause spurious returns.

Asides weather, LIDAR systems can be fooled (either deliberately or indeliberately) to think an object exist by flashing “lights” at it. According to a paper published in 2015, flashing a simple laser pointer at the LIDAR system mounted on autonomous vehicles could disorient the navigation systems of the vehicle, giving it the impression of the existence of an object where there is none. This flaw especially in driverless car application of lasers, opens up a lot of security concerns as it won’t take long for carjackers to refine the principle for use in attacks. It could also lead to accidents with cars stopping suddenly in the middle of the road if they sensed what they believed to be another car or a pedestrian.

Advantages and Disadvantages of LiDAR

3. Not affected by the intensity of light in its environment and can be used at night or in the sun.

7. LIDAR has minimum human dependence which is good in certain applications where human error could affect the reliability of data.

1. The cost of LIDAR makes it overkill for certain projects. LIDAR is best described as relatively expensive.

5. Depending on the wavelength adopted, the performance of LIDAR systems is limited altitude as the pulses fired in certain kind of LIDARs become ineffective at certain altitudes.

LIDAR for Hobbyist and Makers

Due to the cost of LIDARs, most of the LIDAR systems in the market (like the velodyne LIDARs) are used in industrial applications (to bring together all “non-hobbyist” applications). 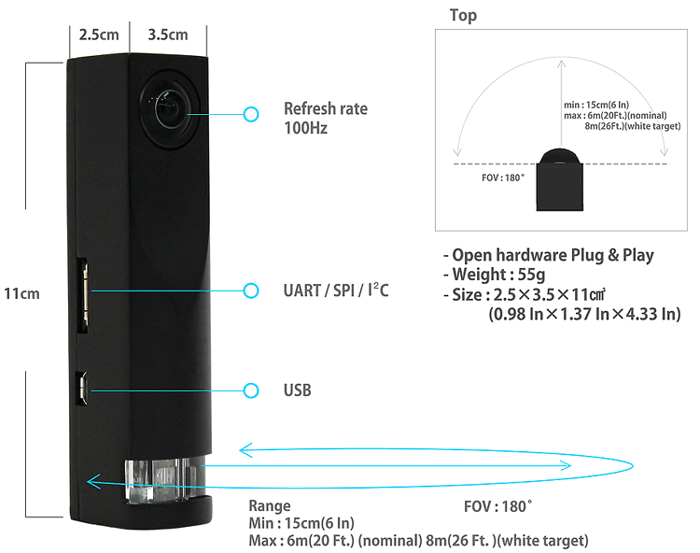 The closest to “hobbyist grade” LIDAR system available right now are the iLidar Solid-State LiDAR sensors designed by Hybo. It is a small LiDAR system capable of 3D mapping (without rotating the sensor) with an effective maximum range of 6 meters. The sensor is equipped with a USB port alongside a UART/SPI/i2C port through which communication can be established between the sensor and a microcontroller.

iLidar was designed to suit everyone and the features associated with LiDAR makes it attractive to makers.