Amid Tough Challenges Why International Wafer Fab Equipment Market to Grow in 2022? 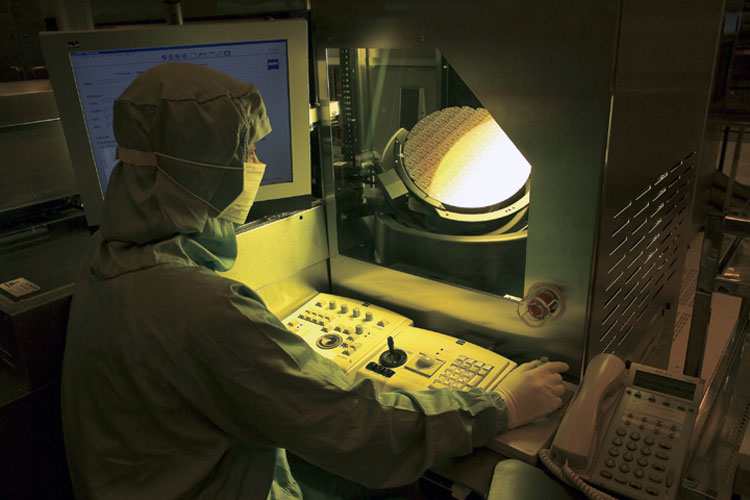 Back in 2019, before the pandemic, the semiconductor equipment industry suddenly faced a huge slowdown coupled with severe technical impediments, which are still looking for an accurate solution. In 2017, the same equipment sector witnessed a colossal demand and the same has been extended into Q1 of 2018. But, interestingly, in the middle of 2018, the memory market started decaying, which in the end forced the vendors of DRAM and NAND to extend or rather reject their equipment orders. Experts on the other hand already predicted that the momentum of this downturn will be carried out throughout 2019 and will hamper the equipment manufacturers with exposure of NAND and DRAM. After that, geopolitical tension appears, and the business tussle between China and the US is a matter of serious concern even though the indelible collision remains unclear.

But, before proceeding further we must understand what the semiconductor equipment is all about. In the fab, there is an imperative process, which is IC manufacturing and there the semiconductor equipment plays an important role. Then, the semiconductor wafer fabrication is utilized to craft circuits that are further utilized in electrical and electronic products. Now, during semiconductor device fabrication, a vast range of procedures are utilized to alter a bare silicon wafer into a circuit. The different procedures comprise CMP (chemical-mechanical planarization), PVD/CVD (physical or chemical vapor deposition), and  RTP (rapid thermal processing) plasma etch, photolithography.

The semiconductor wafer fabrication entails important steps of the photolithographic and chemical process that makes a semiconductor product. On the other hand, the device fabrication requires four steps that comprise different procedures ranging from removal to modification of electrical properties, and deposition. When the fabrication process is completed, silicons are used to manufacture the wafers. Silicons are cooled, melted, and purified to shape an ‘ingot’ that is then cut into wafers. In order to assure the state-of-the-art quality of the semiconductor equipment, a wafer test is performed to supervise the damages because it aids in monitoring whether the processing can be completed or not.

Now, the question is why the demand of this market is augmenting. Various characteristics such as the escalating demand from the consumer and B2B electronics industry coupled with ever-increasing technological improvements in the semiconductor and telecom industry are speculated to spearhead the demand for the semiconductor wafer fab equipment market from 2019-2030. There are some additional factors like equipment and silicon wafer that would assist in analyzing the concerned market in the coming years. Most importantly, new-fangled innovation in wafer technology has crafted a denser packaging of devices like transistors and MEMS (micro-electro-mechanical system) are speculated to create a way for the foundation of innovative opportunities that can be leveraged by various global firms.

The New Road of Problems for the Semiconductor Equipment Sector

Counting the massive demand for memory, the semiconductor equipment sector was anticipated to grow by 15.5 percent back in 2018 as noted by VLSI Research. But, as the memory market at that time witnessed a downturn it was speculated to pull down the entire industry, which in the end caused a decrease in the IC market by 1.6 percent in 2019. On the other hand, the semiconductor equipment industry is following the same path. According to the experts, 2018 was a massive year for the semiconductor industry’s growth, but the memory market’s reduction in demand reduced the pace of the semiconductor industry. Both the semiconductor and memory market was speculated to gain back the pace, but somehow, the downturn that was carried out in the Q2 of 2018 was witnessed during the entire 2019, a year before the pandemic surfaced. 2019 was expected to be optimistic, but sadly both the markets declined in 2019 and the effect was felt till now after the pandemic. This is because there is some sort of over-build in the sectors discussed above and more uncertainty was added when entire China was under stern lockdown. Calculating the entire problem is the memory decline. In 2019, the sales declined to almost 10 percent where it was expected the market to be positive with a growth rate of 4 percent.

However, it has broken the entire semiconductor equipment market. In another survey, the US-based industry association SEMI stated that the international sales of top-notch semiconductor equipment would escalate from 9.7 percent to $62.1 billion in 2018, but in 2019, the market reduced by 4 percent. In the same year, South Korea turned to be the biggest supplier of semiconductor equipment, which is then followed by Taiwan and China, claims SEMI. The picture is also hazy from the applications perspective because the smartphone market remained dull at that time, but additional applications like wireless, automotive, and AI were expected to lead the IC demand.

In order to grab the vein of the market to carefully examine the demand picture of two key important centers in the IC sector-photomasks and silicon wafers. SEMI clearly noted that the shipments of silicon wafers were 13,090 million square inches in 2019, which is about 5.2 percent more than 2018. The shipment was about 7.1 percent during 2018. In 2019, the photomask market outstripped to $billion, which is more than 4 percent in 2018.

For several years, China has been a huge prospective market for semiconductor equipment, but nonetheless, trade scuffles are posing a huge problem in this region. In this country, there are two varieties of chip manufacturers; domestic and international firms. Domestic firms have been investing for many years to perk up the industry. An unnamed industry expert stated that 200mm is a very imperative equipment market and the demand for RF chips, analog, and MEMs caused the scarcity of 200mm fab equipment and capacity.

According to the experts at Counterpoint Research, the paucity of semiconductors is going to pose a huge challenge to the Wafer Fab Equipment supply chain this year. But, interestingly the profits of the WFE manufacturers are speculated to augment 18 percent this year, which will surpass the $129 billion market. This investment in this sector will grow this year due to the massive spending on higher semiconductor performance, complex technology transformations, ongoing investments for the expansion of production capacity, and escalating manufacturing and device intricacy.

The WFE market looks very promising because foundries are undertaking tough efforts to enhance wafer output, ameliorate productivity and decrease defects. On the other hand, the demand is now exceeding supply and in fact, the wafer processing steps are escalated to offer intricate and manifold applications. In 2021, the investments in WFE are restricted by supply, and the demands that are unmet are pushed to 2022 and moreover, customers have extended the allocations of capex. 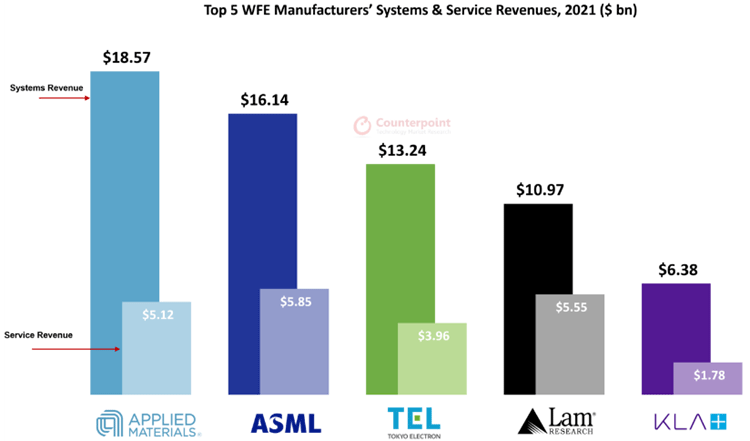 Highlighting the reason behind the growth of the WFE market, senior research analyst, Ashwath Rao told, “This year, the top five WFE manufacturer's revenue will surpass $100 billion, which is due to the increasing capital volume, new-fangled product range, sturdy demand of chips across various industries, and well-built WFE investment outlook. As the global supply chain has been hampered, there is not much availability of components for WFE sub-systems, which would augment the lead time of equipment and obstruction of deliveries. This will lead to the fall of revenue during the Q1.”

If the market of WFE is carefully examined, it will reveal that towards the end of 2021, the revenue recorded a staggering growth of $110 billion, an escalation of 33 percent YoY, spearheaded by the sturdiness of varied segments such as Foundry/Logic, NAND, DRAM. The top five supplier’s service revenue recorded 29 percent YoY to $22.2 billion. The year back in 2020, the overall growth of various segments across the market was escorted by Foundry/Logic enhancement, NAND recovery, and a bit of increase in the market for DRAM assisted in grabbing the total revenue growth of $83 billion, an extension of 17 percent YoY.

“In spite of supply chain obstructions due to the pandemic and increased geopolitical problems, during the Q2 of 2022, moderate growth of WFE industry will be witnessed. Along with that, gross for that year will also be reduced due to the impact of price increases due to workforce, logistics prices, and components from suppliers. The new drift towards export regulations between regions also entails close supervision. Hence, growth in Q2 is speculated to be dampened,” added Rao.