Understanding Intellectual Property & Patents and How to Patent a Design 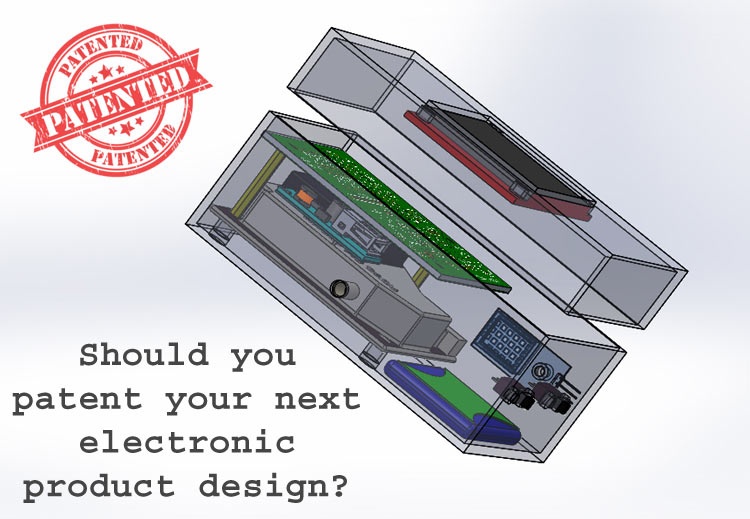 Most of us would have commonly noticed the terms “Patented, patent-pending, patent applied for” written on the goods, products or devices that we buy. Have you ever tried to dig deeper into the meaning of these terms, ever thought why the manufacturer or maker of the product is mentioning it, what is its sole purpose?

Why should I get a Patent?

Let’s rethink it with a small incident, imagine you have successfully completed your product development and started selling in the market through retail and via online shopping platforms such as Amazon, Flipkart etc. and in a short time it became really popular and you are getting a good profit out of it but as the popularity of your product increased you saw a number of counterfeit products are also being sold in the market, these products are not only eating your profits but are also affecting your brand image with their cheap built quality, now what can you do to save your product and unfair competition? If you go to any government body for the help you have to prove them you are the original manufacturer of the product, it’s your creation and you have your rights on it and the twisted part of the story is you can’t prove them, you don’t have any rock-solid proof or any legal proof which can show your ownership over it and then you and your product are doomed.

If the above incident is thought with an angle of patents you may have safeguarded your product ownership and idea and had successfully prevented the counterfeit sellers to steal your idea from you. Patents fall under the category of intellectual property and provide the strongest form of protection among all other members of the intellectual property family.

There are various forms of Intellectual Property (IP) and all of them provide different type of protections whenever one launches a product; they need to utilize one of the intellectual properties before commencing the marketing activities. The most common types of IP are Patents, Trademarks, Copyrights and Trade secrets.

From the above chart, patents provide the strongest kind of protection, but the obvious question is how invention is going to be protected if it is disclosed through the publication of patent and answer to this question is, as one applies for a patent he describes how his invention works with help of text and drawings and in return of the public release of his invention, he gets an exclusive right to it for a limited period of time, and that period of time depends upon the type of patent.

The criteria for getting a patent or one can say the standards on which patent is granted is that the invention should be new (novel), non-obvious (to the person having ordinary skill in the art), should have some practical applicability (useful) and must fall under the category of eligible subject matter which includes machines, manufactured articles, industrial processes and chemical composition. Further, there are three types of patents in broad with a different lifetime, here the lifetime denotes the time under which the patent is solely and exclusively owned by the subject inventor or organization.

There are certain misconceptions among people related to the patenting system and one of it includes that one can obtain a patent on any idea, technically it’s not true. Idea’s alone can’t be patented. One can only obtain a patent on the invention developed from an idea and the description of how it works must be included with the patent application.

Why it’s important to protect your Intellectual Property

The example told at the start summarizes for the importance of intellectual property in a business. If one doesn’t have proper IP protection then it can make a blow to his business, if a competitor brings out a similar product. If one launches a popular product that is hitting the market, then obviously someone will come out with a competitive product. As a maker, an engineer, a designer one has to realize what is new and unique about the creation and make sure to get appropriate protection.

Business houses continuously evaluate assets to know their position in the market and Intellectual property comes under the intangible assets and are major share for the valuation. Ever thought how companies like Ericson, Qualcomm, Broadcom, Nokia are one of the strongest players in their field, it’s because their IP assets which majorly includes patents which are further categorized under Standard Essential Patents (SEP’s). Moreover, IP assets generate money for an organization if they are well maintained, one can sell or license their assets and these deals happens in large financial figures.

In business, a patent is an investment and legal insurance of intellectual assets. It makes no sense to protect your creation against theft if one is not going to get profit from it. Before making a monetary investment in patenting an invention filter the target market and ask is this something that people will buy. If one knows his target market he can strategically account for the manufacturing cost and retail price by comparing similar products available, this will also help in knowing the competition, what they are selling and how you can monetize over the void between your products to that of your competitor.

Patenting an Electronic Product Design and its Worth

“Design is not just how it looks like and feels like, the design is how it works”, these were the words by Steve jobs on which the entire empire of Apple is based upon. Their devices like the IPhone, MacBook have a certain physical appearance which is one of the reasons for being one of the key players in electronic product market. For any of the electronic hardware product, one can apply for two types patents one is the utility patent and other is design patent or registered design.

A utility patent protects the working of the product, its mechanism which is well explained with the help of written description and related figures, diagrams, graphs and flow charts. The design patent protects the ornamental features of your product which basically includes 2 or 3-dimensional drawings which can be from different views. The design patent or registered design is important when the shape and appearance of the product are really important for a product. Let’s take an example of wearable technology and it’s related to the products like bracelets, rings and necklace and it becomes really important to protect its ornamental look. To some people design patent looks a bit confusing by mismatching it with the utility patent. Design patent is obtained on the aesthetic look and appearance of a product. A particular shape of an automobile, a bottle, or a cycle has to covered under the design patent. You can’t obtain a utility patent on these products because of existing prior arts. Design patents are much easier to obtain but one can overcome them easily with certain design changes in the existing product.

How can you improve your Patent Application?

If you have decided that you have to go with the patent for protecting your intellectual property, then do extensive research on your product/invention.

Always prefer to get a brief reporting of the results from a professional. For any further help or information, you can contact me.

Different countries provide different ways to protect designs. In most of the countries including India designs needed to be protected by registering them under the industrial design law as “registered design”. While in the other countries designs are protected under patent law as “design patents”.

Why people hesitate to file a Design Patent

So till now, we have learned how utility patents, design patents and registered design can be used to protect intellectual property. Utility protects the working while the design protects the shape or appearance. Design protection most of the time is less effective than the utility protection as it can easily be overcome by adopting a slightly different design. Though the protection may vary in different kinds of IP but the legal battles which are fought on its ground are really costly.

Early in the history of computers, Apple, Microsoft and Xerox had gone through a legal battle over the IP rights of interfaces (GUI’s). PayPal and Paytm had a chance to foresee each other in trademark infringement.

One of such cases involved Apple vs Samsung patent case in 2011 which ended up in 2018 and involved the multiple infringements which also included design infringements. Let’s understand this case and the importance of Intellectual property for a business with the help of Evidence of Use (EOU’s) charts of few design patent infringements. 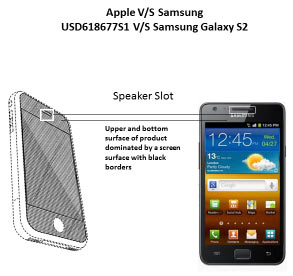 Apple accused various subsidiaries of Samsung including the one in the USA for infringing upon Apple design patents. One of the infringement involved Apples patent USD’677S1, titled as “Electronic Device” which was infringed by thirteen Samsung devices which include the Galaxy S2, the Infuse 4G, and the Verizon Fascinate. The infringement involved the features such as the position of the speaker slots, Upper and bottom surfaces of the screen covered with black borders. The charting above shows the Apple patents against Samsung’s galaxy S2. 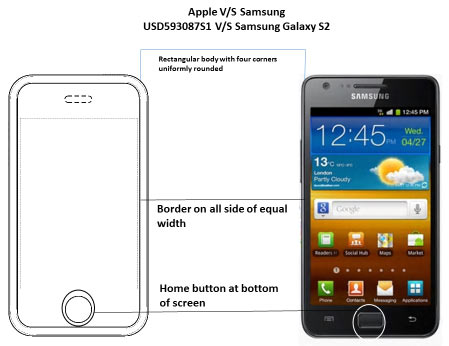 Another infringement in the Samsung vs Apple patent case involved the Apple patent USD’087S1, titled as “Electronic Device”. The infringement involved around Eight Samsung devices are accused to infringe upon Apple’s patent, the devices included the Galaxy S2, the T-Mobile Vibrant, and the Infuse 4G. The features which were the reason for infringing were the Home button at bottom of the screen, Border on all sides with equal width, and rectangular body with rounded corners. 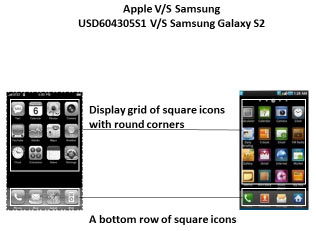 Another design infringement involved USD’305S1, titled as Graphical user interface for a display screen or portion thereof, which involved the infringement over the Graphical User Interface (GUI’s) between the Apple patents and thirteen of accused Samsung devices including the US variants of the Galaxy S2, the Droid Charge, and the Infuse 4G. The infringement involved an interface of colorful square icons with uniformly rounded corners and the second features involved a bottom row of square icons set that doesn’t change as the other pages of the interface are viewed.

**Note Only solid lines are from the claimed design, dotted lines are just for the part of the reference.

The whole case started as Apple filed suit against Samsung in April 2011, accusing Samsung copying Apples innovative technology, products, features, designs by infringing its patents and also took the benefits of Apple’s marketing effort which are closely related to the Apple’s design strategy. The suit involved Apples Patent infringement, Design Patent infringement, Trade Dress infringement. Final decision of the court came out in the favor of Apple after years of cross arguments and counter suing as of the result Samsung paid Apple $ 539 Million. Though many other companies like Google came into the picture as the case proceeded but they were not totally into the suit as the Apple’s arguments were against the hardware companies which were directly getting the benefits from their IP not with a software company which was freely distributing the operating system for the products.

Apple V/S Samsung Suit clearly shows the importance of IP including patents, designs etc. It becomes really important to protect your innovation when stepping out for business.