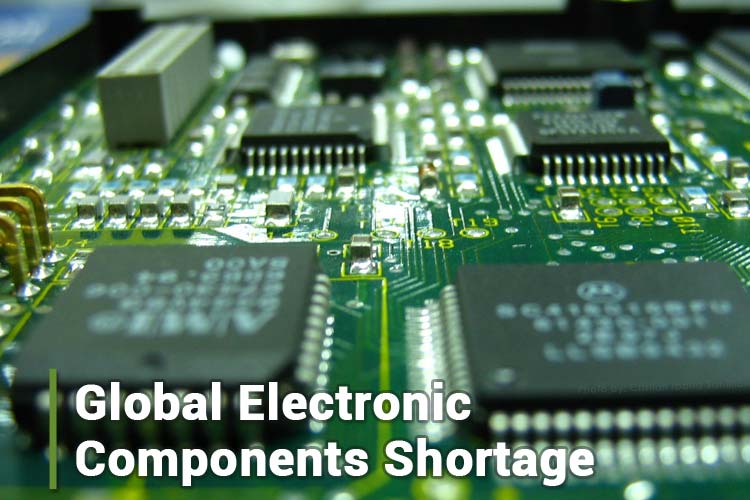 Semiconductors, we all know are the inevitable part of the modern tech world we live in. In fact, the world runs on chips! They are the key component of the electronic device we use, be it electronic devices, cars, medical devices, airplanes, smart appliances, or wearables. Not just that, semiconductors are even used for military purposes and likewise. In a year, approximately around 1 trillion chips are made and for every person on the planet, there are 128 chips. Intel from the US, Samsung from South Korea, and TSMC from Taiwan are the top companies that manufacture the most advanced chips.

The coronavirus pandemic contributed to the increase in demand for these chips. It has changed consumer behaviors and more and more people started buying personal computers, new phones, and tablets, etc. so they can work from home with ease while keeping themselves entertained and connected. This led to the global chip shortage and seems like this is not going to see an end anytime soon. The manufacturing units are not getting enough semiconductor supply. The situation is such that the major technology and automotive industry giants are facing losses in sales as the production has been hampered.

I remember talking about the ‘Semiconductor Component Shortage that has Hit Automobile and Consumer Electronics Market’ two months back, but the situation still hasn’t improved. Today’ we thought of shedding some light and understanding why exactly this happened and when will this issue be resolved? We will also be talking about what’s being done to fix it and if the electronic component supply will be back on the track soon or will it take time?

Undoubtedly, the COVID-19 pandemic led to the chip shortage. The pandemic forced people to work from home and students too were persuaded to sit back home and take online classes. This led to upgrading the computers, people got involved in playing video games, businesses scrambled to set up remote work systems and required more cloud infrastructure. It so happened that the consumers stocked up on computers and other electronics out of insecurity that they might not get the proper supply. This led to supply chain disruption.

The economy in East Asia bounced back earlier than expected with increased demand for cars, and the companies started their production units leading to the increase in demand for the chips. Ford, Honda, Fiat Chrysler, GM among other automakers started struggling to get enough semiconductors, and they warned investors of slowed vehicle production because of the chip shortage. GM also announced that the chip shortage could cut earnings by up to $2 billion.

It’s not just the automotive industry that’s struggling to get enough chips to build their products, electronic firms like AMD, Qualcomm, Sony, and other electronics firms too have been facing chip shortages. With electronic companies working on increasing production, there is no sign that the demand for semiconductors is going to slow down. Another big reason for the shortage is that the cars are getting more and more advanced for which they need more semiconductors. It’s the auto industry that is aiming to add more and more in-vehicle features, which has led to the shortage of semiconductors.

What does Stats Indicate?

Semiconductors are likely to face a shortage of supply in the coming months, as demand is increasing day by day. In December, Semiconductor Industry Association said that global chip sales would grow 8.4% in 2021 from 2020′s total of $433 billion, which is 5.1% more than what was between 2019 and 2020. Semiconductors are in short supply because of the rising demand for electronics. This has led to the shift in business models, thereby creating a bottleneck among outsourced chip factories.

When top chipmaker, SMIC got blacklisted by the US, it couldn’t purchase advanced manufacturing gear from the United States. So, the sanctions prompted big chip buyers to go to TSMC, thereby creating a bottleneck. China also stopped buying chips from elsewhere. The US and China both want to be “The Tech Superpower” and the US has accused China of intellectual property theft and human rights violations and has also blocked some Chinese companies from accessing US technologies. Moreover, China is investing a lot in tech self-sufficiency to reduce its dependency on other countries.

The implementation of many US policies was poor, and the global coordination too was poor. That’s the first thing that needs to be addressed. The idea is that countries should work together to face the challenges.

American president, Joe Biden has ordered industry experts to look for gaps in the semiconductor supply and chain to see how reliant has the country become on other countries to meet semiconductor needs. Semiconductor shortage has persuaded the White House to take steps to combat the situation in bringing the supply chain in the US back to the track. The main problem to be resolved is not catching up after the supply chain crisis, but preventing such a scenario to take place in the future.

Executives claim that they'll be able to ramp up production to end the shortfall, but that’s not going to happen until later in 2021. Once the immediate shortage issue gets resolved, the demand for semiconductors is only supposed to increase with new 5G telecom networks needed by smartphones with 5G-enabled chips and with the expansion in the number and popularity of IoT devices.

The major chip producers around the globe are trying to increase the output, but the small gains are unlikely to fix the shortfalls. This is further hampering the production of everything; be it vehicles, home appliances, or personal computers. The Intel Chief Executive, Pat Gelsinger said: “The supply constraints, and 'immense' investment needed to meet demand mean that the chip shortages affecting the automobile industry and other sectors are likely to last two more years."

What companies are doing to resolve the Issue?

Solving this chip shortage is indeed a matter of time and it is anticipated that, with time, eventually, there will be no huge gap between demand and supply of chips. To avoid such scenarios in the future, major changes should be done on a global scale. Major chip manufacturers have already pulled up their socks and are all set to make major changes. TSMC has announced that it plans to invest $100 billion over the next three years to increase its capacity to meet rising demand. Intel has announced that it plans to spend $20 billion on expanding its fabs in Arizona, opening its doors to produce chips for other companies, thereby adding a new major supplier to the marketplace.

Joe Biden has sought $37 billion in funding for legislation to supercharge chip manufacturing in the country. Four new factories (two by Intel Corp and one by TSMC in Arizona, and another by Samsung in Texas) are slated. China too has offered a myriad of subsidies to the chip industry as it tries to reduce its dependence on Western technology.

No doubt keen steps are being taken to overcome these chip shortages, but according to the industry officials, this scenario is likely to continue till next year. According to the recent reports, major chip-makers viz. TSMC, Nvidia, and Intel have said that the ongoing chip shortage will continue till 2022 and might even extend to 2023. Let’s hope that with adequate measures being taken across the globe, the chip shortage issue is resolved and we don’t have to face such scenarios in the years to come.

It seems to me we should have

It seems to me we should have seen such a scenario as a highly possible development long ago. Murphy's law, anything that can happen will happen. We could have had a stock pile of various components and held on to our tech, not giving it up to a foreign entity that has such a low value on rights and such a high value on a form of Governemnt we resisted for so long as we did with the Soviet Union, North Korea, Vietnam, and any other country that chose to go that way. I heard it said many years ago now, we have placed ourselves at the mercy of China with our defense simply by letting the lowest bid go to them for the highest level of technology which we developed in the first place. Such a small thing as the first transistor demonstrated at Bell lab in Dec. 1947 and now see where it has gone, from a single part to 29,000 on the 40 pin Intel 8086 in 1978 to 54 billion with Nvidia's GA100 and looking at 60+ billion within a couple of years if not sooner. As it is said, What can be done with that? And it isn't just transistors on these chips either. I boggle at knowning about a 32 Nm transistor, 3,000 of them in the space of a human hair each one switching at over 300 billion times a second and the code needed to run these !  I'm just a hobbyist in electronics for something to play with and I am frustrated at how difficult it is for me to locate even  simple components on the net and be forced to rely on Chinese, Taiwan, and other sources. A lot of what I have been looking for seems none obtainable in the states at least at a price I feel reasonable when compared to China, or Taiwan, Hong Kong, and to be able to get them with low shipping costs compared to getting anything from Canada, U.K., Germ. or even finding stuff in the Ukraine or Russian Federation. Then there is the waiting time to clear customs. I never get anything bigger than an envelope or a small box in the mail, I can not imagine how it is for a major manufacturer such as GM to have to address this issue. A few years ago I had what I considered a pretty impressive stock of parts and never seemed to have enough to complete a project without having to order more. Then there is the situation such as when Fry's went out of business after what,70 years? I used to purchase from a local supply house in the region but now they have basically deleted 80% of their inventory, leaving practically nothing in store. Their reason was they couldn't compete with the internet. Now even the internet is not a good source in my opinion. It just takes too long to get what is needed, most of the time.

Sad news, as the shortage