Just like the invention of wheel for automobiles the invention of wireless internet has revolutionized internet since then. Today every average household has a minimum of 5 devices that gets connected to internet and it is estimated that by 2020 we will have 50 billion devices connected to the internet sending and receiving information wirelessly. Today, be it a highly complex workstation or an ordinary smart LED lamp we use the technology called WiFi to connect it to the internet.

WiFi has so far been the most optimal and best suited solution that could quench all our wireless thirst, but it might not be in the future. The demand for faster and safer internet has made the high intuitive human brains to develop a new wireless technology called Li-Fi. What is this new term Li-Fi and how does it differ from a Wi-Fi? Can we expect Li-Fi to replace Wi-Fi in near future? Let’s find answers to all these questions in this article.

Fun Fact: Michael Yardney a strategists says that there will be 3,810 new devices that gets connected to internet every couple of minutes (approx). With this rate we are sure to attain 50 billion devices by 2020

What is Wi-Fi and Li-Fi?

This article aims to explore the difference between LiFi and WiFi, if you want to know more about Li-Fi you can read the Working of Li-Fi article.  Let us dive into the table to differentiate more between Wi-Fi and Li-Fi.

A bit more about Wi-Fi:

Li-Fi might knock our doors sooner or later but let’s understand how Wi-Fi works so that we would be able to feel how this change would be.

The term Wi-Fi stands for Wireless Fidelity and it was invented by NCR Corporation in 1991. Ever since then this technology has evolved and adapted itself to find way into all our offices and bedrooms. Today the term Wi-Fi is very common word which many people think it to be just wireless internet. But no, the term Wi-Fi and Wireless internet does not mean the same, they are different altogether says Dog Ngo editor of Cnet.

When the web of internet started spreading all over the world they were all wired connections. Believe me or not, we still use underwater cables to cover 99% of the world since they are more reliable. But later the evolution of mobile phones and PD’s brought in the need of wireless internet. So at the delivering end of our internet we used Wi-Fi as shown in the picture below 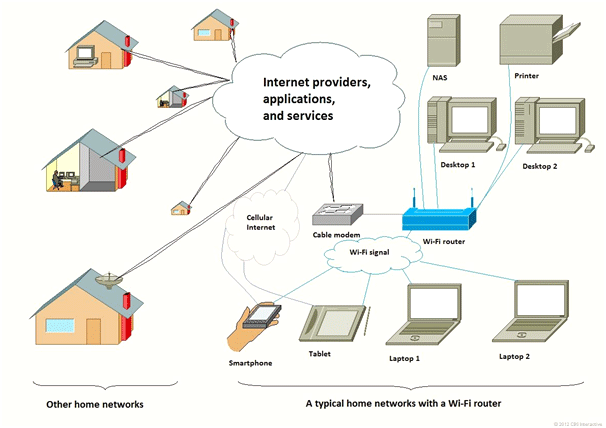 As you can see every Wi-Fi signal needs a Wi-Fi router to send and receive a data packet. These routers are again connected by wires to the Internet providers through a modem. Wi-Fi works with the help of Radio waves and so for every device that gets connected to internet we need to provide an additional piece of hardware that could send and receive RF signals.

Fun Fact: When Wi-Fi was first invented it was mainly indented to use for cashier systems and they named in WaveLAN only years later it was given its iconic name Wi-Fi.

A bit more about Li-Fi:

Li-Fi uses light to transmit data unlike Radio waves. This idea was first coined by Prof. Harald Haas in one of his TED talk in 2011. The definition for Li-Fi can be given as “LiFi is high speed bi-directional networked and mobile communication of data using light. LiFi comprises of multiple light bulbs that form a wireless network, offering a substantially similar user experience to Wi-Fi except using the light spectrum” 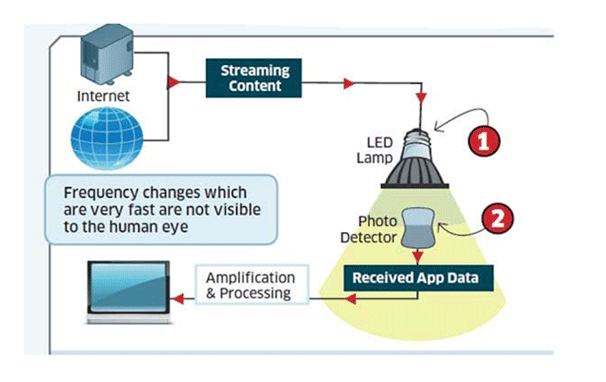 So, yes wherever you have a light bulb you will have an internet connection but here, the term light bulb does not refer to ordinary incandescent lights in our house, these are specially modified LED lights which can transmit data. As we know LED is a semiconductor device and like all semiconductors it has switching properties. This switching property is used to transmit data. The below image explains how a data is transmitted using light.

Every LED lamp should be powered through an LED driver, this LED driver will get information from the Internet server and the data will be encoded in the driver. Based on this encoded data the LED lamp will flicker at a very high speed that cannot be noticed by the human eyes. But the Photo Detector on the other end will be able to read all the flickering and this data will be decoded after Amplification and Processing. 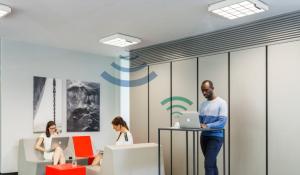 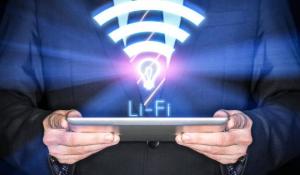