India is Now Looking for 30% Passenger Cars To Be Completely Electric; Claims Experts 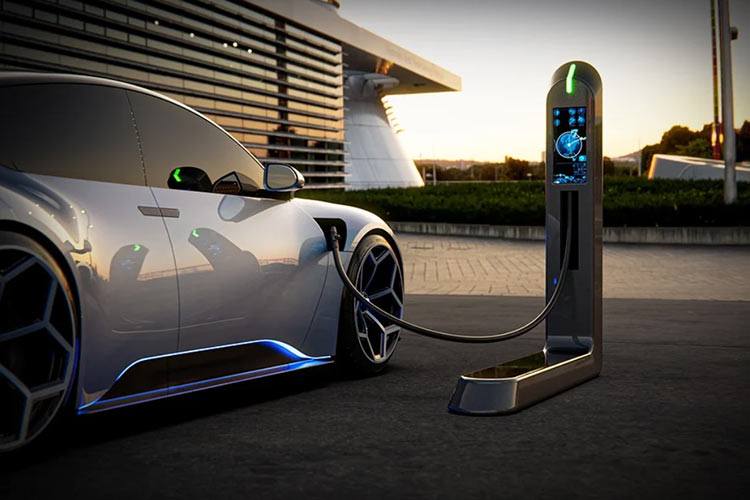 A recent survey report of Markets and Markets has stated that amid the rising struggle to boost the growth of Electric Vehicles all over the world, the market of such is anticipated to increase from 8,151 thousand units in 2022 to 39,208 thousand units by the end of 2030 at a CAGR of 21.7 percent. There are several factors that have helped automotive manufacturers to produce EVs at a large scale and that includes no carbon emission cars via tax discounts and subsidies and also no pollution commuting and assistance from the government for long range. Now, the imperative point to be noted is that the government’s escalating investments and support throughout the world to perk-up hydrogen fueling stations and EV charging stations along with consumer incentives will open the door to opportunities for OEMs to swell their business presence and income stream. In the Asia Pacific region, the market is expected to witness undeviating growth because of a large demand for low-budget electric cars, while the European and the North American markets are growing swiftly because of huge government initiatives and incentives and also the increasing volume of the top-notch passenger vehicle segment. However, inadequate EV charging and hydrogen fuel stations, performance challenges, and higher costs involved in initial investments could degrade the growth of this sector internationally.

Backed by the huge government support and initiatives along with OEM’s exceptional manufacturing capabilities helped the sector to witness 3 million electric car sales in 2020, which is an increase of 40 percent in 2019. But, because of the coronavirus pandemic, the global automobile industry was down by 16 percent sales. After a swift growth, there are now around 10 million electric cars on the road which represents  ~1 percent of the international car stock The Net Zero Emissions by 2050 speculates having 300 million electric vehicles on the road which accounts for 60 percent of new car sales.

According to an exclusive report of the Economic Times, around 18 countries have set goals to completely wipe out sales of traditional combustion engine vehicles by the end of 2030. As per the report, India is now looking for 30 percent of passenger cars to be completely electric, while China is looking for electric vehicle sales to be 25 percent growth and the US is looking for the same at 50 percent growth. Another survey report, dubbed ‘Oil and Gas Sector Strategies for Electric Vehicles (EV)’ stated that electric mobility is one of the most innovative ways through which gas and oil farms are developing and expanding their business to adapt to the energy transformation, which is already in progress. Firms such as Mitsui, Shell, TotalEnergies, etc are expanding their EV charging stations, unleashing top-notch batteries, and various other EV value chain capabilities via mergers and acquisitions. 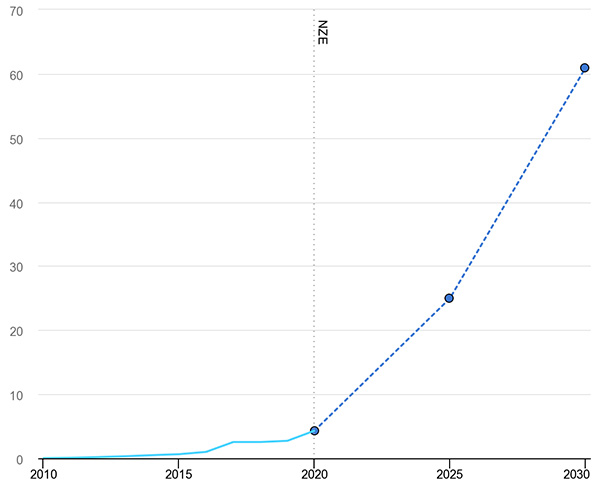 During the pandemic-infected year in 2020, the stock of international electric vehicles reached 10 million with BEVs witnessing two-thirds of the global’s electric vehicle fleet. Since then several road transports went to be electrified at a large scale with 25 percent of the world’s electric vehicles being mostly two-wheelers, but this was mostly limited to India, China, and ASEAN countries. In fact, in several bigger cities, electric micro-mobility is also gaining traction. For example, sales of e-cycles in the US increased two-fold thereby outstripping sales of all other bicycles. According to a report by the International Energy Agency (IEA) over 82,000 new electric buses were on the road all over the world in 2020, which is a growth of 10 percent in 2019. China is equipped with 98 percent of the entire electric bus stock, while in America, India, and Europe electric buses are being deployed at a rapid pace.

Where do the Global Passenger Vehicle EV Firms Stand Currently?

In Q2 2022, the sales of international passenger electric vehicles increased by 61 percent year-on-year, which is a total of 2.18 million units. Counting the entire volume of EV sales, battery-backed electric vehicles grabbed 72 percent of the market share, while the rest is earned by plug-in hybrid electric vehicles. The latest survey report of Counterpoint Research claims that amid the growing anti-China sentiments, the country is still leading the worldwide EV sale, which is then followed by the US and Europe. The report also added that sales of China’s EV escalated by almost 92 percent year-on-year in Q2 2022, which is around 1.24 million units as compared to 0.64 million units in Q2 2021. According to market research experts, as the international semiconductor production crisis is coming to an end, automobile manufacturers are being able to meet the augmenting demand for EVs all over the world.

The experts also added that the sales of EVs would have been much more if China had not been smeared with new COVID outbreaks during March due to which strict lockdowns were enforced in several key regions of the country. Due to this scenario, the production of EVs was reduced drastically during April 2021, which further recorded the biggest slump in the market share of passenger vehicles in China since March 2020. Although Q2 2022 was speculated to perk-up production; but escalating geopolitical tensions, fiscal damages, supply chain disruptions, and energy crises might restrict the growth of China’s automobile market, mostly the EVs market in the coming years. 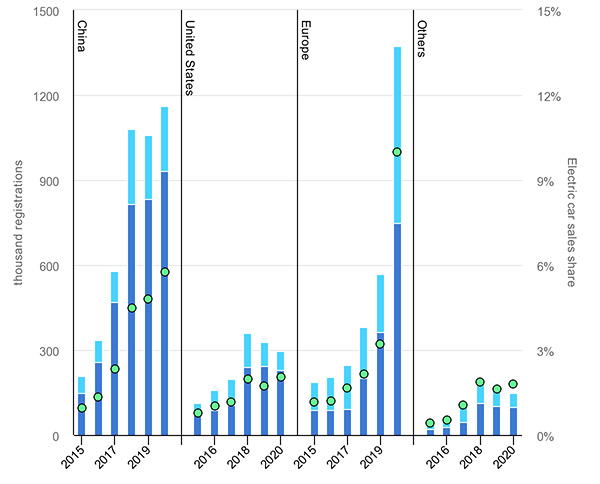 The Shenzhen-based global automobile firm BYD defeated Tesla and became the world’s top-selling EV firm. In Q2 2022, the company shipped around 3,54,000 EV cars which is an escalation of 266 percent YoY. Back in March 2022, BYD stopped the production and sales of traditional vehicles officially and instead focussed on developing PHEVs and BEVs vehicles. The company’s 60 percent of sales appeared from its top models BYD Qin, BYD Song, and BYD Han. Now, the company is aiming to appear in the European market whose operations are now already commenced in Norway, and is looking to begin production sooner in the Netherlands, Germany, and Sweden. Global automobile experts speculated that Tesla would lead the EV passenger vehicle market, but their expectations fell short because the Elon Musk led firm in Q2 2022 witnessed a growth of 27 percent YoY, which is a shipment of 2,54,000 units. In spite of its augmented business in the US, the market in China was massively affected by COVID-19 lockdowns and during the same quarter, only 98,000 cars of the company were being sold. Ever since the pandemic appeared in 2020, the cumulative sales in China during April and May decreased by 49 percent YoY, but during June, sales increased by 115 percent YoY. Amid very low sales and production, Tesla still remained a tycoon in the BEV segment.

The Partnership between Wuling, SAIC, and GM turned out to be a huge success as the Wuling Hongguang Mini EV became the top-selling EV car in China. Ever since its launch in Q2 2020, the car remains the unchallenged market leader. During Q2 2022, the market share of Wuling Hongguang increased by 16 percent YoY which helped it to grab the third spot in the international EV market.

Headquartered in Munich, Germany BMW’s electric car sales increased by 18 percent YoY during Q2 2022 and has a strong presence in the PHEV segment. Interestingly, during the same quarter, the company’s PHEV sales witnessed a growth of 2 percent, while its BEV sales saw a growth of 18 percent. BMW is now looking forward to shipping 2 million BEV units by the end of 2025, which will be a tremendous achievement in the EV industry, claims researchers at Counterpoint Research. For instance, X3 and i-series models are leading the company's BEV segment, while 5-Series, 3-Series and X5 models are spearheading the PHEV segment. Another German global automobile firm Volkswagen witnessed the biggest slump in sales of its passenger EV cars, which is 9 percent YoY. The shipments reduced considerably in the US and Europe by 74 percent and 44 percent. The semiconductor supply constraints and limited production of automobile components coupled with increasing inflation due to Russia’s tussle with Ukraine reduced the sales of passenger EVs both in the US and Europe. It has also been reported that Volkswagen failed to produce new proprietary software for its vehicles, which is also thrashing the firm’s shipment targets.

Neil Shah, Senior Research Vice President at Counterpoint Research Said, “loads of incentives play a pivotal role in the adoption of EV cars and for instance, China’s sturdy incentive schemes for both consumers and automobile manufacturers have aided the country to turn into an international EV leader. Until 2023, the subsidies for consumers are extended, which was earlier decided to terminate back in 2021. Most importantly, for manufacturers, there is a dual credit policy that proved to be a huge success and the government is aiming to weed-out consumer subsidies as soon as the industry reaches massive growth. The European countries offer very less subsidies due to which the adoption and sales are very slow. Overall, Europe’s EV market is just 16 percent YoY, while the same for China is 90 percent in Q2 2022. As the sales increase in the European countries, the consumer subsidies have ended with a complete change in focus on charging facilities, and also incentives for the people on building charging stations.”

Of late, the US unveiled a new EV policy that comprises alluring incentives for consumers are the car manufacturers. Around $12000 will be available for both consumers and manufacturers upon buying a new EV, which is speculated for the swift growth of EVs in the US. Countries such as India, Japan, Thailand, South Korea, and Malaysia have also commenced providing incentives and various added benefits for manufacturers and EV purchasers in either tax exemptions or discounts on actual prices.

Highlighting the entire market scenario, Peter Richardson, Senior Research Analyst said, “By 2023, the automobile industry is likely to get back on track with full trust. Towards the end of 2022, the sales of international passenger EV cars will not reach more than 10 million units because of the coronavirus pandemic, production halt due to power catastrophe, reduced manufacturing of components, and escalating consumer price inflation.”