How Will the Indian Phone Market Impact If the Government Bans Cheap Chinese Smartphones under sub-12K? 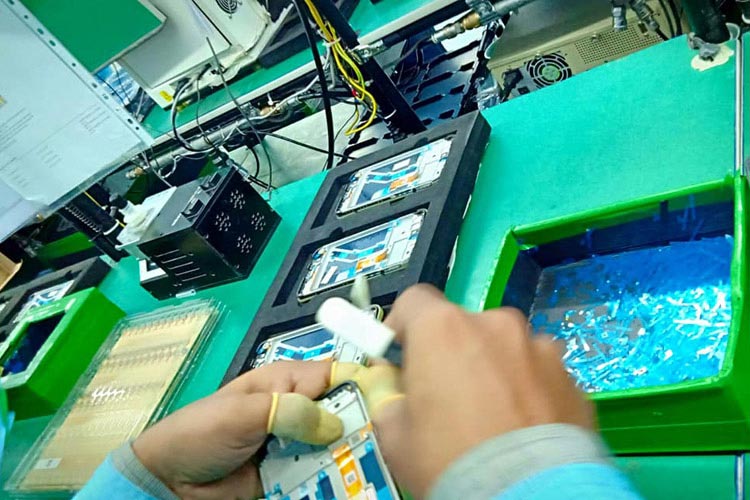 The government of India is now looking forward to wipe out the selling of cheap Chinese smartphone brands in India in order to perk up the domestic smartphone brands such as Micromax, Karbonn, Lava, and others in the country under the tag of ‘Make in India’ and ‘Atmanirbhar Bharat’. According to several media reports, sources from the ministry, and an exclusive report of Bloomberg highlighted that the nation “seeks to restrict Chinese smartphone makers from selling devices cheaper than Rs 12,000 ($150) to kick-start its faltering domestic industry”. Experts also added that if the government’s plan appears true then it will give a serious blow to the Chinese firms like Realme and Xiaomi that have grabbed around 50 percent market share in the sub-$150 (Rs 8000-Rs 12,000) segment in India, which is now the world’s second-largest mobile market. According to a report by Counterpoint Research, the smartphones within Rs 12,000 handed out 31 percent of the total smartphone volumes in the nation in the quarter of June this year, which is compared to 49 percent in the same quarterback in 2018. The Jio PhoneNext has just appeared in the market and does not have much traction among the users, whereas Chinese smartphone brands control 75-80 percent of these volumes.

Speaking about the possibility, Haider Ali Khan, Special Correspondent, The Hindu, said, "If it turns out to be true, the entry segment buyers won’t get a fair chance to choose among the options available today in the market. At the same time, it isn’t good for healthy competition in an open market. If Indian brands want to compete they should come with better and comparable products. The bulk buying segment, entry-level, will be largely impacted by such decisions. The mass adoption of new technologies will stay limited. The 5G roll-out won’t get affected but the fruits of it will be limited to those who can afford it.”

Renowned Chinese firm Transsion Holdings, which has well-known brands such as Itel, Tecno, and Infinix has also turned out to be an imperative smartphone player in India in terms of lower-end segment coupled with top-notch quality. In Q2, these brands all together provided 12 percent of the market share. Within a price range of Rs, 6,000 itel spearheaded the market with a huge 77 percent share, while Tecno grabbed the next spot within the range of Rs 8,000. Several experts feel that the matter is going to be a reality because of late, the Enforcement Directorate (ED) has done several raids on Chinese brands like Xiaomi, Oppo, and Vivo. The economic intelligence agency is carefully supervising the cases of purported tax evasions by these Chinese brands. According to Finance Minister Nirmala Sitharaman, the Directorate of Revenue Intelligence (DRI) has sent show-cause notices to Xiaomi and Oppo India for duty evasions. Based on the investigations, the notice demanded Rs 4,403.88 Crore from Oppo Mobiles, while five strict cases of custom duty evasions have been reported against Xiaomi India. Most importantly, Chinese companies since 2020 have sent 332 FDI proposals to the union government since 2002 out of which only 80 have been approved.

Another research expert familiar with the matter, Tarun Pathak, Research Director at Counterpoint Research said, "I think an outright ban is unlikely but overall restricting certain players based on segment might lead to an unstable ecosystem. First, it's (<INR12K) is roughly a $5Bn category and only two or three local players currently can't take it overnight. One needs a strong portfolio, distribution, and after-sales services mix, which is currently missing from Indian brands. And eventually, these players will need the help of the Shenzhen ecosystem, so any countermove from China will not be healthy for the overall ecosystem. Chinese players have a 75-80% share in the sub $150 segment that contributes to 31% of the overall smartphone market and since we are at a cusp of tech transition, this move can also slow down the diffusion of 5G into lower price points <INR 12K).” 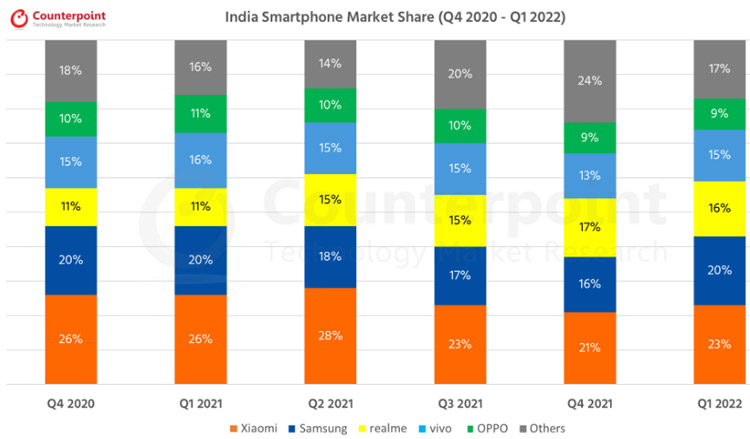 Why This Move Would Hold up 5G Growth in India?

Amid the various speculations, reports also stated that according to some government officials, the curtailment of the Chinese cheap smartphones is actually going to uplift the domestic firm’s status in the market, but the facts are still yet to be provided in terms of percentage and in how many years. But, it seems that decision will not be taken soon, and currently, there is no aim to ban such, as per a report of CNBC TV 18. Now, even if the decision is implemented soon it is not that easy because as per a survey of the government itself, three out of every ten smartphones sold in the country are within the range between Rs 8000-Rs 12,000 where 78 percent of this is manufactured by the Chinese companies.

On the other hand, only 20 percent of the market is dominated by the Cupertino giant Apply and South Korea’s tycoon Samsung, while 1 percent of the smartphones sold and manufactured are by Indian companies. The important point to be noted is that since 2015, a huge range of Chinese brands started gaining popularity in this soil, which also penetrated the 4G smartphone device. The pivotal reason for their triumph is the affordable price range coupled with sophisticated design and top-notch technology which is why the average selling price in that year was Rs 10,800, while the contribution from sub-Rs12k phones was 82 percent of the overall sales by unit volumes, according to an exclusive report of the ET.

"Import of complete built-up Smart Phones already attracts a 20% Customs Duty which is a decent support level for domestic manufacturers to compete in the Indian market. What has been missing is the domestic supply chain and dependence on imported components continues to challenge companies manufacturing Smartphones in India. The smartphone industry, as we all know, is high tech and very high-volume industry. Without having global scale volumes and a grip on the know-how and know-why of the same, it is difficult for Indian manufacturers to become ‘Aatmanirbhar’. Thus it may be better to focus on incentivizing value addition and development of components and modules locally rather than an absolute ban on imports which has many avoidable ramifications on the industry and market.”

Now, in the coming few months 5G is going to be unleashed and then expanded all through the nation including the remote corners, but the overall benefits of this technology can only be felt when the 5G smartphones are distributed properly in the mass markets. Going by the traction, the Rs 12,000 range of phones has always proven to be an imperative segment in terms of unit sales. If ample brands are not available in the market in this segment, there is a huge probability of slow progress of 5G device perforation, which implies this cutting-edge technology, which is seen as a pillar of digital transformation would witness scanty adoption. Hence, there should be more variety of 5G phone brands in the coming 9 months of the 5G unveil in the nation. This will not only expand the 5G user base but also begin innovative use cases throughout several segments. Faisal claims that the Chinese brands brilliantly contributed to the opening up of a flourishing digital ecosystem utilizing 4G where not only Government to Citizens (G2C) but B2B services are providing advantages to every person indirectly or directly.

Is The Ban Looked Upon to Boost India’s In-house Phone Manufacturing Unit?

Until the first half of 2015, the in-house phone makers such as Intex, Lava, Karbonn, and Micromax were extremely popular among people in India and they were being sold like cheesy popcorns. But, when the FDI escalated during the second half of that year, the Chinese players quickly captured the mass popularity, they surveyed in detail what the consumers in the country require in a smartphone and in what budget. This has helped them to produce sophisticated products in an affordable price range.

There are now several discussions ongoing among the government officials to perk up the domestic mobile sector besides semiconductors, EVs, and industrial electronic items. The officials in the ministry think that the sub-Rs 8K to 12k smartphone or even below that range should be kept for Indian players only, and if it happens all the Chinese players except OnePlus will have to go out of the market at that price range. The decision aims to craft ‘Indian Champions’ in the industry, which is one of the primary goals of PLI schemes. 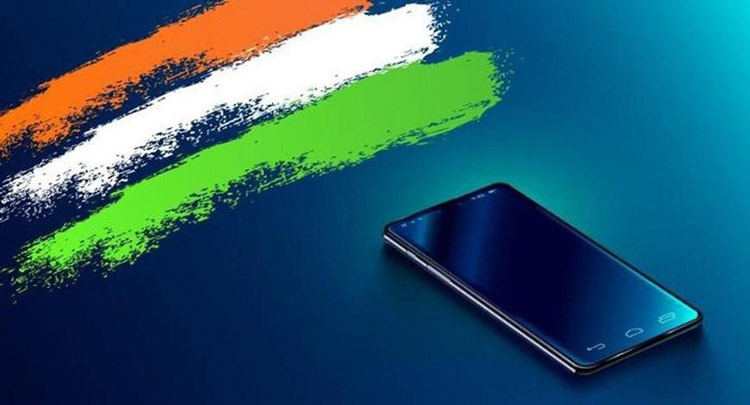 In the sub-12k range, the market for smartphones in India is about 45 percent mostly dominated by non-Indian brands, while below the 8K range, the market is around 20 percent, Therefore, when both the price segment is considered, the market is 23-24 percent, claims IDC. Now, below the 12k price segment, the leading top three players are from China which has two-thirds of the market. 60 percent of the smartphones within the 12k range produced by Xiaomi, Transsion, and realme is around 60 percent. Navkendar Singh, Associate Vice President, Client Devices & IPDS, IDC India said, “The decision will hit the Chinese players and from the consumer perspective, there are not many other choices because Samsung is not much available in this price range and very soon it will exit the business of 15k range though it will take some time. There are not many Indian options because there is suspicion about the quality of the Jio phone and better quality is offered by the Chinese brands. For Indian brands, Lava has a small presence and is not a big brand. Now, boAt and Noise could make smartphones with the huge help from the government.”

“Now, the point is not only losing sales among the Chinese players but also from the perspective of the PLI scheme of manufacturing because if you don’t allow them to sell, why will they manufacture and how will they meet the targets and also expand their operations. It is now not only a domestic issue but also an international issue as well. Why would companies now come here and invest if they can’t manufacture and sell half of the market,” added Singh.

The government’s policies that have magnetized international firms also aided the Chinese companies to commence production in India. It has helped the country to become the globe’s second-biggest phone manufacturer after China. Most importantly, the majority of phones are sold in India and produced within the country itself. Keeping the PLI scheme in mind, the Cupertino tech giant back in March proclaimed minimum manufacturing of Rs 25,000 crore worth of mobile products in FY 23 via Foxconn. The home-grown brands mentioned above including Padget Electronics and UTL Neolyncs have also taken part in the PLI scheme for manufacturing mobile items, but the Chinese players who are on a higher subsidy range have shattered their dreams. Researchers added that these domestic companies cannot even become contract manufacturers. Hence, their production range will not be sufficient to grab the incentives.