With the advancement of technology and science over the past few decades, electrical and electronic equipment (EEE) has turned out to be an imperative part of our daily life. Nonetheless, the consumption, disposal, and production of e-waste have become unsustainable. The total consumption of EEE has escalated to 2.5 million tonnes. Devices such as laptops, radios, phones, and toys with batteries and power add to the volume of e-waste after use.  Although the volume is augmenting, the adoption of recycling and collection is very low and hence, the generation of harmful greenhouse gases, and the release of toxic substances during informal recycling are on the rise. It’s not only the developing or the lower economic countries affected by this problem, but the developed countries are also facing the challenges of proper management of these wastes. For many entrepreneurs and individuals, it is now a method of income by recovering important materials from the dumped items. Most of the time, the separation and recycling is carried out informally or rather unscientifically devoid of any safety and health standards. Various associations are considering this matter strongly and urged for an impeccable legal policy and also investment in technology and modern equipment for seamless recycling. 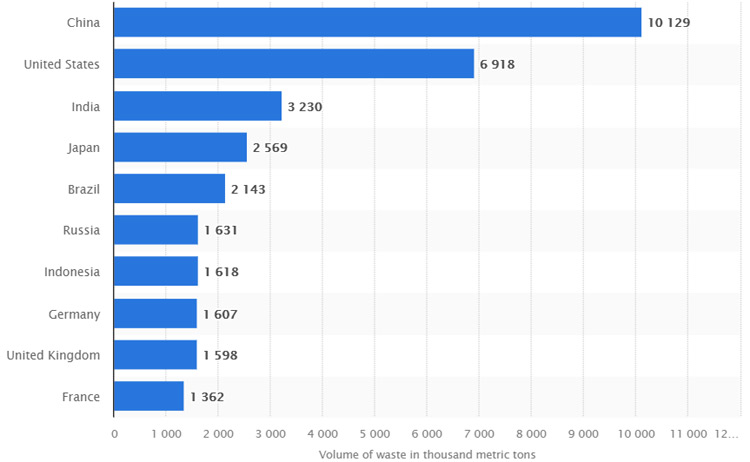 In the solid waste management sector, waste electrical and electronic equipment management (WEEE) is now a critical matter coupled with worldwide interconnections between developing, developed, lower economic countries. In the background of sustainable development, the current impediment of e-waste management is to relocate the pattern to a feasible resource from a toxic pollution site.

The notion of waste hierarchy centers on 3R policy (reduce, reuse, recycle), prevention of waste, and lower awareness to landfills. Backed by an impeccable legislation, e-waste is now regarded as a special waste stream. The concept of circular economy is now largely promoted by the European Union (EU) policy by which wastes are regarded as resources and commenced regulations for a recycling society. According to the WEEE Directive, 2012/19/EU member countries such as Romania cannot meet the waste collection rate of 45 percent due to the longer lifespan of electronic items and lower purchasing power, chiefly in the rural regions.

Due to the intricate environmental laws and regulations, the high price of labours, and insufficient modern facilities, the developed countries mostly do not recycle the wastes and the huge piles of waste streams are either exported to the developing countries or dumped in the landfills. Export of dangerous and toxic wastes to the underdeveloped countries is strictly prohibited as per the Basel Convention on the Control of Transboundary Movements of Hazardous Wastes and their Disposal. In order to promote recovery and recycling options, the developed country's national waste regulations restrict the landfill.

The recyclers majorly available in the west and in Europe are more to do with eye-tired products. For the consumer durables, there are hardly any recyclers available. The type of recycling processes people use in the west is different because the labour is very expensive and they try to automate the process, which means during recycling you lose out a lot of materials and metals. The resource recovery and yield are also much lesser than India. The Extended Producer Responsibility (EPR) is promoted by the EU that shifts the responsibility of e-waste management and recycling to EEE producers and importers from local authorities. The import of e-waste is strictly restricted by many developing countries like Nigeria, Cambodia, China, Vietnam, Malaysia, Pakistan, while nations countries such as Benin, Cote D’Ivoire, Kenya, Liberia, Senegal, Uganda, South Africa, India are yet to consider this matter.

Tarun Pathak - Research Director - Counterpoint Research told exclusively to CircuitDigest, "Researchers think there are dozens of hurdles, but the imperative one is insufficient regulations that can be enforced efficiently. The entire ecosystem needs to be in sync in tackling e-waste. Other challenges being lack of awareness and low use of technology to navigate the challenges. For example in the smartphone segment, smartphone makers that have embraced recovery, refurbishment, and recycling of second-hand devices, not only are making a positive contribution to building their user base, they are also helping the environment by substantially reducing the embedded energy cost per year, per smartphone.”

“There is a requirement of state-of-the-art recycling options backed by cutting-edge technology and modern machines and setting up more centers. As of now, there is less awareness of e-waste collection where again technology can be used. Melting the printed circuit boards and recovering metals through efficient technology will help a long way. Leveraging AI technology in sorting out the e-waste and use of more biological technologies will help further,” added Pathak. 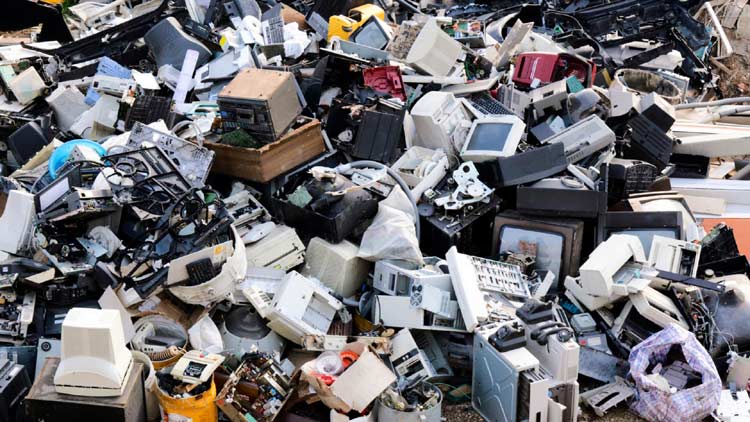 In India, the collection and recycling of e-waste is mostly an activity of an informal sector. Last year, researchers stated that the country ranks third in terms of producing e-wastes followed by China and the USA. Towards the end of 2019, these three countries contributed 38 percent out of the total 53.6 million tonnes of e-waste. One of the biggest challenges is that disposal, recycling, segregation, and dismantling of e-waste is carried out by unskilled laborers manually in the informal sector. Lack of awareness is another major issue due to which the wastes are dumped with garbage, which in turn is picked by dump collectors to sell it to the scrap dealers. The latter then sells it to the recycling firms who utilize outdated machines and technologies to recycle.

India generates around 3.2 million metric tonnes of e-waste each year and the collection rate is only around 10-20 percent. There are 412 recyclers available in the country. In 2011, the first laws regarding e-wastes were introduced in the country and in 2016 the extended producer responsibility (EPR) laws were introduced. Then, the producers were given a specific target for the collection of end-of-life products based on certain formulas. Over 1500 producers have registered and have taken EPR Licenses. Now, the objective is to collect the e-waste from end consumers. So, these materials are being sourced through Producers Responsibility Organisations (PROs) or through authorized recyclers.

A L N Rao - CEO - Exigo Recycling told exclusively to CircuitDigest, "The collection of waste is key because there are two types of products; volumetric and non-volumetric. The latter can easily be shifted across the country, but it is a nightmare for logistics to shift volumetric products in the country. The reason being the recycling plants mostly are family-driven and they are located only in select pockets in the country. Hence, shipping of volumetric products becomes an expensive affair. There is a viability gap funding (VGF) that is being done by the producers to ensure fulfillment of their EPR targets."

“Currently, there is no inventorization of e-waste inventories available in the country and therefore, the exact numbers of inventories are not available. Government offices in India are the major purchasers of electronics, which is around 40-50 percent. The GOI through their offices sells the wastes to the highest bidder, which is a non-economical proposition for recyclers. The bulk consumers like the banks, software companies, and corporates also sell their wastes to the highest bidders. So, there is a leakage of material that is happening to the refurbishing market or to the informal sector in a big way, added Rao.

Deployment of Technology in the Global E-Waste Sector

As the production of e-waste is increasing by millions of tons every year, it is very important to recycle them in a proper scientific manner. Recycling implies that the chemical element, molecules, and materials are separated after which the extracted materials are sold as raw materials for making new items. This is where advanced technology plays an important role because proper extraction from these wastes is not an easy task.

Of late, the Singapore CEA Alliance for Research in Circular Economy (SCARCE) worked on the latest method that will augment the recycling rates with the help of chemical extraction processes in solution and mechanical procedure of automation of sorting and disassembly. A single device microfluidics, which is integrated and miniaturized, has been developed in order to decrease price and time while developing the new extraction process. With the assistance from microfluidics, it becomes trouble-free to puzzle out the intricacies of transfers of chemical elements at the interface between water and oil. In fact, the exchange surface between the oil and water is controlled properly due to the presence of porous membranes. With the help of microfluidics, the flow of materials can be calculated accurately.

Now, in order to deal with the problem of e-waste by linking numerous stakeholders among the informal and formal sectors, the IIT Madras has launched a unique platform, dubbed e-Source. This has the ability to balance the logistic supply and chain and help recycle 53.6 million tonnes of e-waste every year. This exchange dias will act as an online market for WEEE and offer a seamless and formal supply chain between sellers and buyers.

According to Counterpoint Research, the legislative frameworks for household e-wastes are not properly maintained in Malaysia and in various Asian countries and they don’t even follow the EPR laws and schemes. Experts in Malaysia think that to enhance the sustainability of smart city notions, the e-wastes appearing from households require effectual management. To tackle the challenge, a smart household e-waste collection box was exclusively designed and placed with e-waste level measurement sensors to record the disposal data. Now, a backend server has also placed that schedules and notifies e-waste collectors automatically to collect and dispatch the waste when the collection box is filled 80 percent. In fact, a mobile application was also launched. This is an impeccable instance of how each country can control and recycle its e-waste with the help of cutting-edge technology.

Artificial intelligence is another step that can tackle the problem of increasing e-waste garbage through smart waste management and recycling and is speculated to unleash an enhanced disposal method to recycle sustainably. For instance, ZenRobotics, a Finland-based firm back in 2011 started using AI  for smart recycling by controlling e-wastes utilizing a robotic waste sorter. Amalgamating AI, machine learning, and computer vision, synchronized trials are carried out by the bots to collect recycled materials from the moving conveyor belts. Since then, implementing the latest technology for recycling of wastes has gained popularity.

The tag in the garbage is read by AI to identify the category of garbage and then for analysis it is sent to the actual server. Then, the numerous categories of garbage are compared by the actual or the main server and ultimately it selects the suitable recycling or disposal method. Then, it executes the clean recycling or safe disposal of the garbage wastes.

Smart or intelligent traschcan furnished with IoT sensors and AI programs is another unique way to manage e-wastes. The IoT sensors on the cans have the potential to measure the waste levels of the garbage thrown inside. With assistance from intermediate servers, it sends this data for processing to the actual disposing system. The entire system has the capability to identify the volume of each waste and the respective waste disposal method. 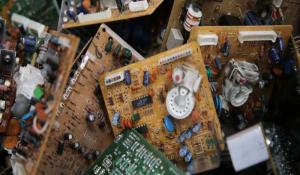