What is the Future of Consumer Service Robotics Market? Defines Experts 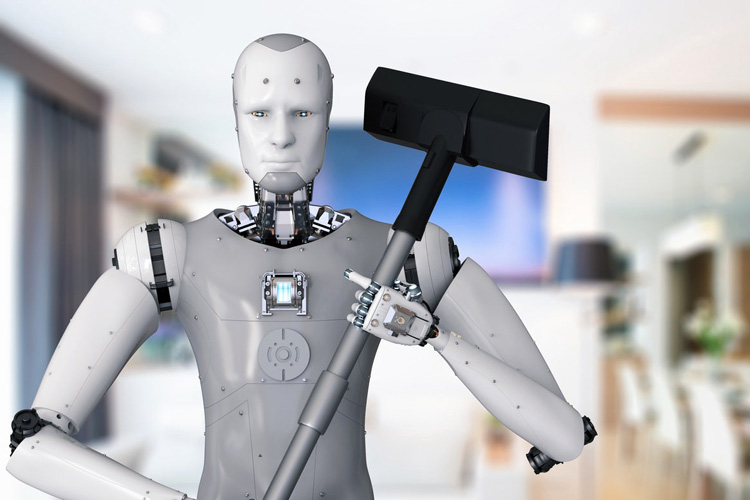 With the rapid advancement in technology over the past couple of years, especially in robotics, artificial intelligence, big data analytics, and smart data centers, the service industry commenced utilizing robots to carry out a wide variety of activities. According to the experts, the actual intent of utilizing robots was just to perk-up the productivity and the recent coronavirus pandemic has made robots more urgent among the industries, which offer contactless services during the social distancing norms. Conventionally, service providers are human, but the growth of digital technologies such as AI, IoT, and smart robots are constantly wiping out the human workforce. For instance, they have been put on in some hotels, airports, retail stores, and many more. For the past two years, the COVID-19 virus is continuously highlighting the differentiating aspects and performance of robots in various industries and services. These service robots can reduce the work pressure on the hospital staff, while also keeping them safe from infection.

Back in 2020, the service robotics market was estimated at USD 23577.1 million and is speculated to grow by USD 212619.7 million by 2026 and also expected to boost at a CAGR of 44.9% over the forecast period from 2021 until 2026. Manipulation, cognition, and interaction are a couple of imperative aspects that have crafted service robots more alluring, while component providers and top-notch technology have played a vital role in transforming or rather modernizing the robotics ecosystem. For example, a Tokyo-based startup, known as Preferred Networks offers its AI technology for Toyota Motor's autonomous driving systems and the robots made by Fanuc. The Asia Pacific countries such as China and Japan are spearheading the growth in the medical technology sector, thus, crafting a huge market for service robots in the region. In 2017, the Japanese Ministry of Internal Affairs and Communications stated that 35.2 million (approx) inhabitants were aged 65 years or above, which is expected to augment by 36.2 million in 2020. In fact, the South Korean LG electronics tested some robots that can wipe out massive workers from the service industry. The robots are crafted to carry out tasks that include proving drinks and food to people at airport lounges and hotels, taking care of check-in and check-out at hotels including transporting luggage. 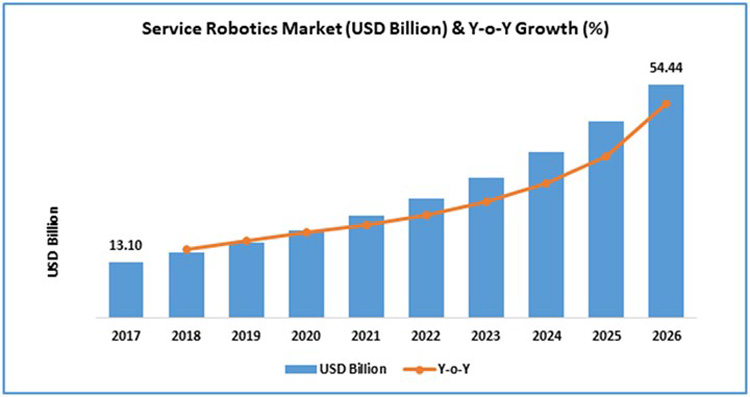 Some Recent Key Barriers to the Service Robots Industry

Reliability is one of the most imperative features of a successful robotics platform or industry. Consumers demand autonomous machinery to be impeccable, which is not only smart but more effective than other variants. The point to be noted is that lack of mobility is one of the main challenges the industry is now facing. An important difference between the robots of the upcoming years and today is mobility- the potential of robotics to follow us perfectly and navigate the environment autonomously. This will be imperative for service robots to completely assist their owners and will have an instant impact on the perceptions of reliability. Mobility crafts connectivity intricate especially for those bots that are made for outdoor functions. This is because the connectivity is either has limited coverage, very costly, or undependable. As most robots require connectivity to operate cannot function properly when deployed in a remote location. Mobility is a hindrance for both logistics and engineering. Hence, service robots require seamless connectivity to operate properly, and if the network drops the devices will not be able to perform as it meant to.

Cybersecurity is another key area for the service robots industry. Cybersecurity is a serious matter of concern in the IoT and robotics domain as both collect imperative data and transmitted by trusted services. In fact, robots that are operating in public areas are in more danger because they are easily accessible to hackers. The robot’s important security is the network that they are connected into. Digital attacks are more common when the network security is inferior and without encryption, the data is unprotected from infiltration. Apart from gathering sensitive data from the robots, the hackers can also gain control over the robots on certain occasions. This can remove the trust of service robots among consumers and they cannot send files as needed.

It is a true fact that robots have the ability to carry out tasks rapidly and or in a reliable way and if not, they will fail to offer longer engagement in the marketplace. Nonetheless, assuring perfect reliability on robots can be intricate as there are various things that even manufacturers cannot control. They comprise location, external interference, connectivity, weather, user errors, and many more that are out of the reach of the manufacturer and the engineer.

According to new research by Counterpoint Research, the international consumer service robotics market managed to grab 25 percent YoY growth in shipment towards the end of 2021 and is speculated to grow at a CAGR of 27 percent in the coming four years. The growth was spearheaded by an amendment in consumer preference improvement in sophisticated technology and the accessibility of a huge range of low-priced devices. Highlighting the statement above, Senior Research Analyst Anshika Jain said, "Robots, which are meant for cleaning homes mainly comprise robot vacuums and is the most controlling category in the robotics sector, which grabbed two-thirds of the overall consumer service robotics industry. The pandemic has boosted the entire robotic vacuum sector that witnessed escalating demand from the household consumers." 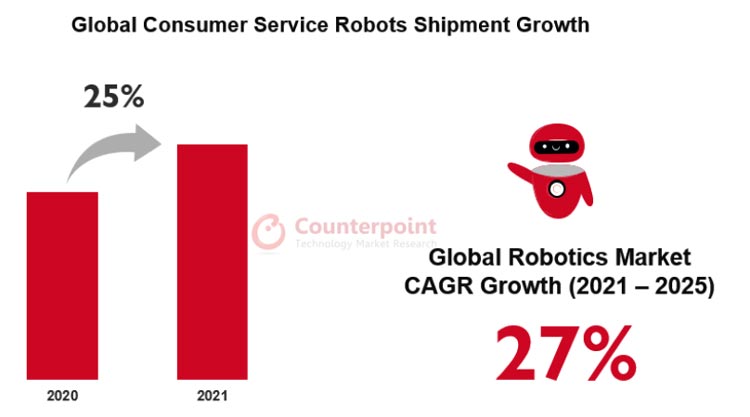 “With the improvement in artificial intelligence (AI), the cost of software and components are also decreasing, which is making robots more popular in the service industry. Apart from this, there is a huge advancement in other areas such as computer recognition, and speech recognition, which overall spearheaded the growth. Additionally, important policies of the government along with the assistance of investment and funding have improved both the products and the industry,” added Anshika.

The report also highlighted that the shipments of the consumer service robotics market are speculated to perk up at a CAGR of 27 percent between 2021-2025 with the education and personal category contributing the largest of 54 percent by the end of 2025. This category provides the highest share because of the rapid requirement for elderly care, innovative ways of learning for the kids, and social security. Most importantly, the ASP (average selling price) of these products is speculated to decrease further and then these products will be more accessible to the consumers.

Justifying the statement above, Peter Richardson, Research Vice President, at Counterpoint Research said, "We calculate the market growth of education and personal robots will move beyond $4.5 billion by 2025 with an additional growth speculated beyond 2025 because of the aging population in several countries and augmented focus on STEM (Science, Technology, Engineering, and Mathematics)-based learning. Robots, which are manufactured for these use cases will be furnished with certain technologies that can be used in other emerging segments as well.”

The house cleaning variant mostly consists of vacuum robots, which in 2021 grew by 21 percent and contributed 68 percent of the total consumer service robots shipments in which China was the biggest marketplace followed by North America and Europe. The big OEMs like Roborocks, Ecovacs, and iRobot provide in-house software and hardware podiums and the firms save all the data on their cloud network via amalgamation with cloud organizations. While the education and companion robots provide 31 percent of the overall share in the market in 2021 and garnered 33 percent YoY growth. But, unfortunately, it had the lowest ASP of $279 in 2021. The primary growth spearheaders comprise entertainment, kids' education, social distancing norms, and elderly care.

The market of consumer service robotics holds massive potential in the coming years because of advancing use cases. Among all, the vacuum cleaner market in robotics is mostly mature, which also has huge growth potential. While robotics in the medical fraternity is at a bit risk because they require colossal capital and investment and the R&D aftermaths are incalculable.