Are Recent Fire Incidents Impacting Growth and Sales of EVs? Find Out What OEMs and Industry Associations Say 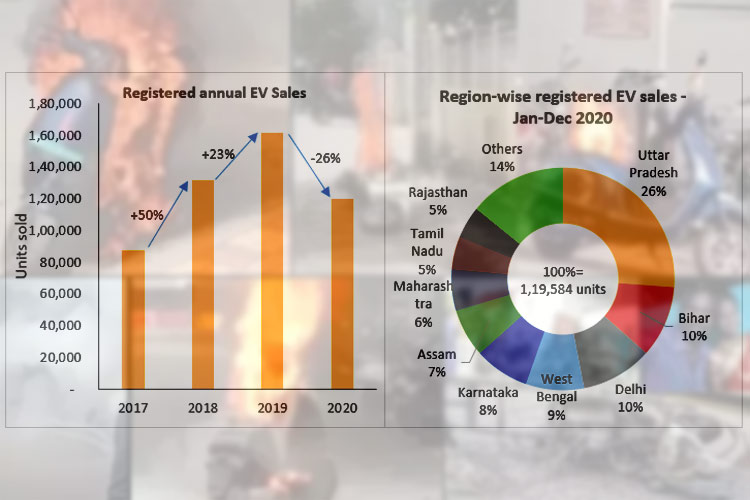 The international demand for electric cars has been mounting every year, which is mostly because of the serious environmental concerns and regulations, degrading air quality, and escalating consumer demand. Moreover, top-notch technological innovations in EV and lithium-ion battery technologies are largely responsible for their augmented popularity. Electrification of cars has the potential to decrease greenhouse gas emissions, while at the same time, it can be attributed to its efficiency over the traditional petrol and diesel-powered vehicles. The power source is one of the main challenges that existed in the ICE vehicles for a long time. According to some automobile experts, when it comes to improving air quality and controlling pollution, the most sophisticated petrol or diesel cars have an efficiency of around 50 percent, while the modern electric cars have an efficiency of around 85 percent. 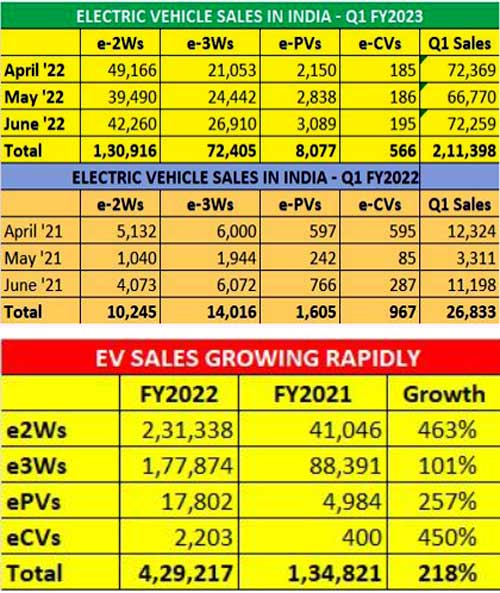 The Indian Brand Equity Foundation IBEF clearly stated that the entire electric vehicle market grabbed an international share of 8.3 percent, which comprises both Plug-in hybrid electric vehicles and battery electric vehicles. Towards the end of 2020, it was an escalated growth of 108 percent and during the end of 2021, the total volume of EVs sold is around 0.32 million units, which is up 168 percent YoY. Currently, the automobile industry is the fifth largest on the planet and by the end of 2030, it will turn to be the third largest in the world. The point to be noted is that EVs will surpass the popularity of ICE cars because the latter are dependent on traditional energy sources, which are not sustainable, and the country imports 80 percent of crude oil from other nations.

A couple of fires ablaze on electric scooters such as Ola, Okinawa, and others over the past few weeks have uplifted safety standards and regulations of this fastest-growing sector of the automobile industry. The fire incidents have also taken the life of a father and his daughter, which caused huge anxiety among the people. In fact, the concerned Ministry has undertaken various steps to probe the incidents and notified OEMS to thoroughly check their products before selling them. Recently, the Central Consumer Protection Authority (CCPA) stated that it has sent notices to 4-5 EV makers where the manufacturers have been notified to provide clear reasons behind the incidents and why the regulators will prevent themselves from taking stern action against them. The Minister Of Road Transport And Highways Nitin Gadkari also added that the government sent show cause notices to two-wheeler EV makers involved in the incidents. Counting all these actions, a couple of experts in the automobile sector claimed that it would impact this growing segment and will reduce the growth and direct sales of e-scooters.

Refuting the statement above, Sohinder Gill, Director General of Society Of Manufacturers Of Electric Vehicles (SMEV) exclusively told CircuitDigest, "We don't see any direct impact on sales. After the first flurry, the incidents have subsided and the affected OEMs are already responding to them. The government is tightening the battery safety norms and the OEMs are going back to the drawing board to design safer batteries. The exponential growth in the sales of electric two-wheeler continues despite the challenges in the supply chain and we expect the E2W sales  of around 800000 this financial year.”

While many OEMs believe that Globally fire cases in Electric vehicles are not new. India in the EV race is a late entrant and is still in the evolution stage. This industry still needs a lot of research work and keeping the environment and sustainable living in mind, the country has to achieve a very ambitious target, in a short period of time. Certain mishaps where EVs caught fire led to a momentary setback for electric vehicles in India. According to the executives of AMO Electric Bikes, OEMs have been asked to maintain standards of quality not only at the product development stage but also at the time of mass production. The Indian government is continually looking for ways to stimulate the growth of EVs through schemes like the National Electric Mobility Mission and the Fame 2 policy. In the last 10 years, there has been significant progress with electric vehicle production and its sales. 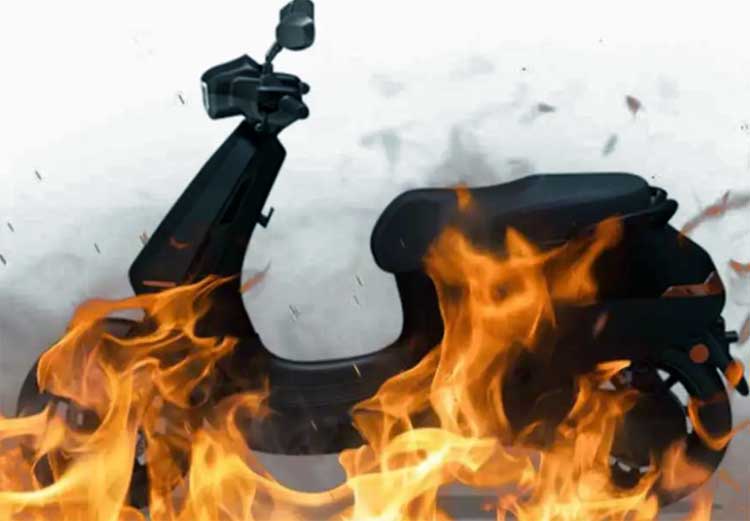 In an exclusive interaction with some research experts regarding the impact on EV sales, Soumen Mandal, Senior Research Analyst at Counterpoint Research told CircuitDigest, “The recent fire incident signals that OEMs are not conducting proper tests before putting vehicles on the road. The battery chemistries Indian companies use are mainly NMC and NCA which have more energy density but are slightly less safe when compared to LFP. NMC and NCA are used widely across Europe, China, and the US, but only after stringent testing is vehicles put on the road. India’s frequent incidents may lead to a slightly lessened growth rate for the EV market domestically. The Indian government is also trying to standardize battery parameters to avoid these types of situations and increase reliability for EV adoption.”

Now, the question remains whether the EV tests by the OEMs conducted before selling are sufficient or not and what needs to be done. Globally, there is an UN-certified R136 standard for carrying out the safety tests, but for India, the AIS-156 standard is well-accepted and is quite sturdy on shock protection monitoring, how a battery functions when it is over-discharged or overcharged, and testing. As per experts, the AIS-156 proves to be very effective, but they scrutinize only one battery pack. Moreover, the tests carried out do not properly show how properly a battery and its management system functions over time. In order to meet the same, all the OEMs must launch a system that properly supervises and monitors the tests in every possible way and for all battery sets manufactured. In fact, the Bureau of Indian Standards (BIS) recently unveiled systematized frameworks to judge the performance of EV batteries crafted out of lithium-ion. Also, there are two upcoming battery safety standards, which are currently under development.

Rajiv K Vij, Founder of Plug Mobility said, "Fire Incidents should not have taken place and show lack of adequate norms/processes which are critical for EV’s growth going forward. Having said that, Vehicle fires take place for ICE vehicles even today even though these have been in existence for many decades. Such incidents require firm action by the Government-which has acted quickly and taken effective actions and by the industry which has also taken it seriously and is implementing necessary corrective actions. These isolated incidents have not really impacted sales numbers which is visible from the high growth that is being witnessed for EV’s across India."

Over the past few years, India has been regulating emissions norms (mainly focused on improving fuel efficiency). Although EV sales have grown from 2021, Indians typically suffer from range anxiety, hence they are not too keen on EVs. Moreover, the high price of EVs compared to traditional vehicles coupled with weak charging infrastructure are the two other main reasons for low EV adoption. To push EV adoption, the different state governments recently came up with lucrative subsidies which are acting as EV sales boosters in the two-wheeler and three-wheeler segment, while sales in four-wheelers are limited by the production and availability of charging networks. India has decided to keep its EV-boosting FAME-II policy alive until 31st March 2024. To cut emissions, the government is also relying on biodiesel and ethanol mixed fossil fuels alongside EVs.

“Up to 2021, India had to import all major EV components which only added more to already high EV prices. Since then, however, many companies have been setting up domestic battery production facilities and component manufacturing, thanks to the PLI scheme and other production-side subsidies. Leading EV markets like China, Europe, and the US started boosting EVs a decade earlier than India. Moreover, possessing an abundance of lithium, required for EV component manufacturing, has helped them to roll out EVs faster and at a lower cost. Similarly, stricter emission norms have also played a crucial part in increased EV adoption across Europe and China," added Mandal. 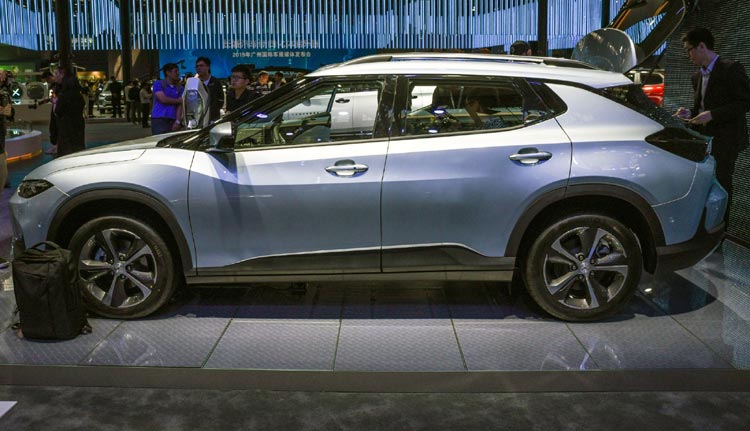 But still, there are many challenges in the proliferation of EVs in India. All the vehicle segments have different challenges. In the case of two-wheelers, awareness and demand creation is the biggest challenge that OEM needs to defy. If we talk about the 4-wheeler segment, lack of charging infrastructure is the foremost challenge on which the industry, government and bigger private players need to join hands and work out a solution. As far as public transportation like buses is concerned, the energy needs are very high and the current infrastructure will not support the operations. The government in collaboration with private players should figure out ways to fulfill the energy need through renewable sources.

The listed countries are in different stages of their EV journey. Considering China to start with, their EV ecosystem is ahead of India. If we talk about their electric 2 wheeler segment, the growth is at its maturity. China is manufacturing approx. 40Mn electric Scooters annually, only 2-3% of two wheelers are ICE Vehicles, and the rest of the market has been shifted to Electric 2-wheelers. Whereas in India we are merely manufacturing 4-5 Lacs per year and almost 98% of the total two-wheelers are ICE vehicles. In China, 4 Wheelers and Buses are at a growth phase, on the other hand in India we are at a very nascent stage in these segments.

Europe and The US on the other hand have very different scenarios. Europe as a region has an extremely cold climate and has hilly terrain which together becomes another challenge for electric vehicles to perform.

“The US in the parallel world have very low population density and the distances are way too long, hence EV in the US needs to have good range due to which the two-wheeler market is not so good in the country. However, companies like Tesla in the 4-wheeler segment are doing good. Public transport (Busses) doesn’t do well in the country. Despite all the above-mentioned challenges and scenarios shortage of Semiconductors is a global challenge for the EV industry,” added Kumar.