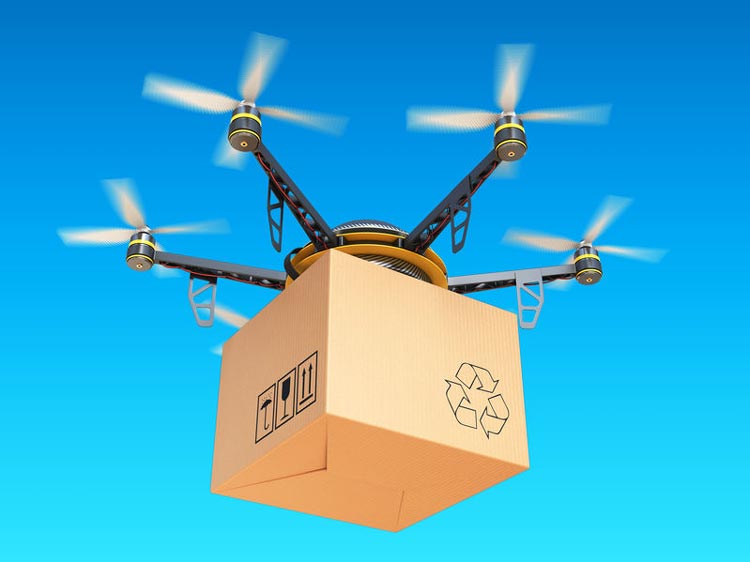 Drones have existed for a long time, but have gained popularity only in recent times. These Unmanned Ariel Vehicles have gotten better, Cheaper and versatile with time. Drones are helping to penetrate into various sectors, rather than being just limited to hobbyists.

Current Scenario of the Shipping Industry

The shipping industry has been hugely dominated by container ships. As reported by CNBC, these ships transport more than 90% of the goods in the world. The domination of container ships in the transport industry is clearly evident. According to the Ministry of Shipping, around 95% of India's trading by volume and 70% by value is done through maritime transport. The other modes of transport contributing to the shipping industry are trucks, planes, trains, and drones.

Ships are cheapest but slowest of all. It can take over a month for goods to sail from Mumbai to New York. Moreover, these ships are limited to ports therefore further transportation is handled by Trucks and trains. Shipping via air is the fastest but its potential is limited due to heavy costs.

The demand for faster delivery has amped up delivery via air, making room for drones in this sector. The global drone logistics and transportation market accounted for more than 24 million dollars in 2018, and that number is expected to grow to 1.6 billion dollars in 2027. These growing numbers might be an indication of a major change in the shipping industry.

How does the Drone Delivery Work?

Before advancing further we must explore a little about the working of drone delivery system, do not worry we aren’t talking physics here.

Drones use rotors for liftoff, forward, backward movement and also for rotation. So motors all around but what happens when a drone gets short on battery power and they will have to rush back to their power-stations to get their batteries recharged.

Two methods have been explored to tackle this situation so far. The first coming straight from Amazon Air, which is planning to release drones from multiple dispatch centres around the country. These drones from Amazon has can travel a distance of around 16kms. For this to possible Amazon will require nationwide dispatch bases.

The other possible method for take-off has been discovered by UPS (American package delivery service). In this case, vans from UPS will act as dispatch centres for drones. Loaded from within the van, these drones will have the road-bound vehicle navigation system to deliver parcels.

The flight of drones, no doubt governed by the laws of physics and aerodynamic but there are many other factors that influence the flight of Drones. These drones need to be able to identify moving objects during their flight therefore, advanced algorithms and sensors are used for this obstacle detection process. These autonomous drones use GPS to navigate to the desired location and are closely monitored for security reasons. To prevent ground or air accidents these drones are equipped with automatic sense and avoid (SAA) systems. While this is a basic overview, every other company is determined to develop a technology/ software of their for safer drone delivery.

We are pacing towards a future of drone delivery. Companies like Amazon, Google, UPS, Zipline, DHL, Dominos and a few others are making serious efforts to get this tech into action. Meaning drones hovering above our houses to deliver products will not be a thing from a futuristic movie anymore.

At current two designs are being majorly tested

a) Land and detach package and

b) from-air lower package to ground

Land and detach delivery requires the drone to land in a consumers garden, driveway. Whereas, ‘from air lower package to ground’ works by delivering packages via a cable while the drone remains in air at a safe height.

There are many courier companies which have already started using drones to deliver packages. Here is the list of few. 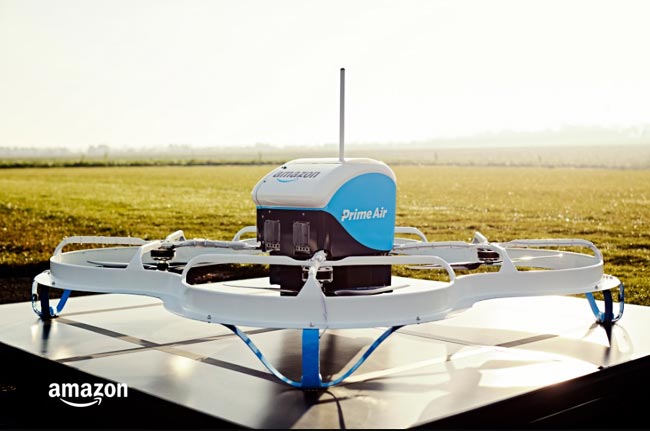 Amazon is keen enough to implement this technology in real-world and their efforts have already started showing up. With Amazon Air service in action, the e-commerce giant will be able to deliver packages up to 5 pounds in 30 minutes or less using small drones. The company claims that these completely electric drones built by them are capable of flying up to 15 miles. This year in June they showcased their new Drone design which is capable of vertical takeoffs and landings similar to a helicopter. Amazon Air has its development centres in the United States, United Kingdom, Austria, France and Israel. 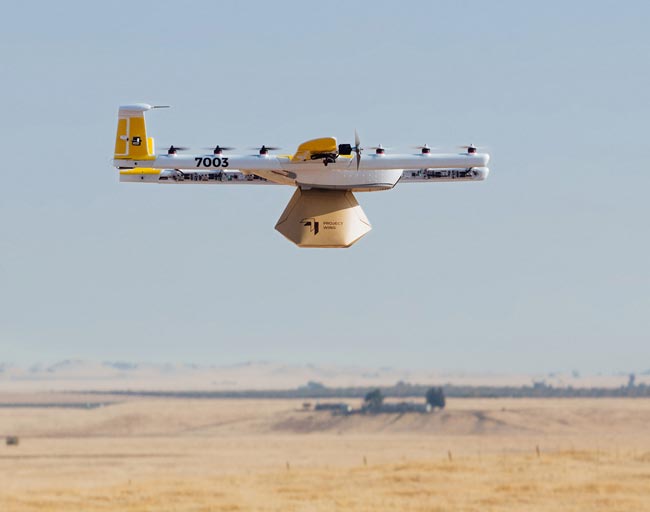 Wing a subsidiary of Alphabet Inc (Parent company of Google), has successfully established itself in Drone-based delivery sector. As it became the first to receive Air operator’s certificate from the Federal Aviation Administration. This certification permits a company to allow its operations as an airline in USA. The company aims to reduce traffic congestion in cities and help reduce CO2 emissions. It is also developing an unmanned traffic management platform that will allow unmanned aircraft to navigate around other drones, manned aircraft, and other obstacles like trees, buildings and power lines.

Wing owned drones can travel a distance of about 20kms while attaining a speed of up to 113 km/h. These drones weigh around 4.8kg and are capable of carrying packages up to 1.5kg in weight.

DHL is one of the largest logistic companies in the world has partnered with drone specialists EHang for using drones to deliver packages in Guangzhou, China. This is the same company that broke a world record by lifting a single-seater autonomous flying taxi.

For this project, Ehang is using its Falcon series of drones which weigh around 9.5 kg and are capable of carrying a maximum load of 5.5kg. These drones have a flight time of about 18 minutes when loaded and 38 minutes when empty at  speeds up to 65km/hr.

UPS is another company seeking certification from the FAA to take a lead in this race of drone delivery. Back in 2016, the company conducted two test projects. The first project was in partnership with Zipline aimed at providing medical facilities in Rwanda While the other was in collaboration with the drone manufacturer Cyphy works.

Earlier this year, the company partnered with another drone manufacturer, Matternet to deliver medical samples at a North Carolina hospital. Which clearly indicates that the company is determined enough to get drone-based delivery in action.

Dominos is gearing to get your favourite pizza delivered even faster. The pizza franchise has already begun delivering pizza’s via drones in New Zealand in partnership with Flirtey. Currently, the feature is only available to select customers. However, both the companies are working to scale drone delivery to other regions of the world. 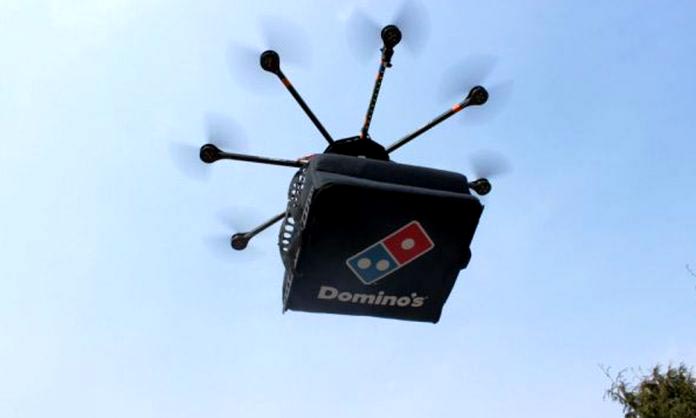 These futuristic vehicles come with certain advantages and disadvantages. So, let us quickly take a sneak peek.

4. Reduced greenhouse gas emissions – Drone delivery would help to reduce emission of greenhouse gases as they are completely electric in nature, except a few hybrid drones (fuel & electric)

2. Flight times – Drones run on batteries and their flight time is hugely dependent on these batteries. It is worth noting, that the flight time reduces with increasing loads.

3. Collision issues – Drones these days are equipped with excellent sensors, but might be an issue considering future prospects as drone delivery will increase in coming days.

4. Drop locations – These drones as usually autonomous and are dependent on GPS for navigation. These might face issues in densely populated areas.

5. Privacy Breach – Delivery drones have cameras and they constantly record footage and not everyone around will be comfortable with it.

Are Drones really the future of shipping industry?

To be honest, this is a difficult question to answer and the internet is full of opinions citing this question. Delivery drones are certainly the buzzwords these days, and e-commerce and technology giants are looking forward to embracing it. But there is still time when we see drones around flying around seamlessly delivering parcels. Factors such as flight legislation, flight time, sense and avoid technology and parcel weight are major obstacles that delivery drones need to overcome.

Looking from an economic perspective, drones need to make as many deliveries as possible in the shortest possible time, in order to make a profitable run. It is evident that current delivery drones are not capable of delivering many deliveries. Compare this with a delivery truck and you will find that these are certainly better than drones, delivering hundreds of parcels in a single run.

Drone delivery has a lot to overcome before it gets into real action. But none can deny that it is here to stay and is the certainly the future of shipping industry.