In commercial and industrial environments, it’s essential to house electrical devices in a secure enclosure. Such devices include controls such as power supplies, terminals, relays, fuses, and many others.

The underlying reason for selecting & utilizing an electrical enclosure is to prevent airborne particles such as debris or dirt as well as liquids from negatively impacting these devices. On the other side, many of these devices run on extremely high-voltage, and that makes it imperative to keep valued employees out of harm’s way.

What You Need To Know About Heat Transfer

As the temperature in given facility shifts throughout the day increased heating or cooling must be brought to bear. This ensures the enclosure remains within a standard range that underscores safe operation. It’s important to keep in mind that fluctuation outside best practices can result in condensation build-ups, freezing, or overheating. Given that the vast majority of electrical components work seamlessly at reduced temperatures, the following heat-transfer factors are worth considering.

Changing temperatures in or around the plant may demand the use of both cooling and heating to maintain an optimal temperature. Controlling the temperature can eliminate the risk of condensation forming inside the enclosure and reduce overheating or freezing of the electrical devices.

When managing the warmth of an electrical enclosure, all three of these factors may be present. Some may be beyond your control, which is why improved temperature oversight remains a necessity.

A basic understanding of heat transfers demonstrates that decision-makers cannot rely on controlled exterior temperatures or those within the enclosure to remain static. Increased or decreased use of the housed devices can cause unexpected spikes, particularly when external transfers are at play.

Humid conditions can also present adversity when trying to optimize conditions. All of these moving parts present a challenge that requires a proactive system that moves and disperses heat and humidity efficiently. Industry leaders commonly employ the following strategies to achieve consistently optimal temperatures.

According to enclosure supplier FactoryMation, convection remains the primary method used to control modest electrical enclosure temperatures. The greater the air and movement within the enclosure, the better the heat transfers.

Natural convection relies on hot air rising naturally and cooling air falling. While it may not seem like circulation is occurring at first blush, nature is hard at work inside the enclosure while the equipment is operating. This method tends to be most effective when only nominal cooling is required. Vents can be utilized to allow hot air to expel itself from the top of the electrical enclosure. Additional vents may be prudent to allow for full air circulation

A forced convection strategy capitalizes on natural convection by merely pushing the rising hot air out. Commercial fans are generally rated to exhaust hot air and can be automated to provide heat transfer regulation.

As a more proactive approach to heat removal, forced convection can create a steady airflow that delivers enhanced protection against equipment overheating. Fresh air can even be moved into the enclosure, and it’s not uncommon to employ filters to minimize moisture and dust.

In a sometimes volatile commercial and industrial setting, closed-loop systems tend to be the most secure ways to regulate temperatures. They do not necessarily rely on convection because they seize control of the internal environment and adjust it automatically. These are common reasons decision-makers create closed-loop cooling systems.

Many of the industry-standard closed systems enjoy a protection rating. These commonly include air conditioning units and heat exchangers, among others. Air conditioning units tend to be more highly sought after in this capacity because of their enhanced ability to reduce heat exposures.

Many come equipped with a condenser and evaporator and far outpace convection methods in terms of environmental oversight. But before deciding on which method to move forward with, consider some due diligence.

When deciding how best to implement a temperature control system, considers assessing the process in place and review the data garnered from the following items. It’s always in your best interest to make an informed decision about temperature regulation given safety and cost.

At the end of the day, industry leaders are wise to bring work with experienced professionals when crafting the temperature control guidelines of electrical enclosures. There are serious safety implications to consider as well as possible disruption if a system is inadequate.

Comparison Guide to Efficiently Fabricate Electronic Enclosures for your Products 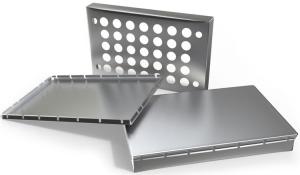 Electrical Enclosures - 10 Important Factors to Consider Before Selecting One