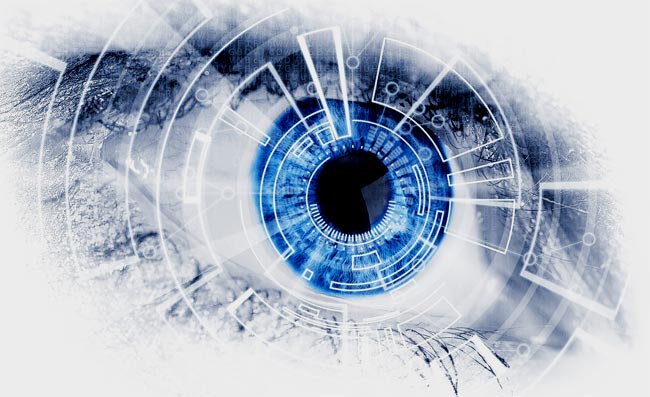 We are living a life with full of colors and pictures we daily see, a life without sight is dark. And blind people are alive with the dark lives. It’s not like just helping a blind person to cross the road we have to do something more for them as a human being. As we belong to the community of engineers - nothing is impossible for us if we try. If scientists generate ideas then its engineers who put life in those ideas. Today we are having all the machines in our hand, it’s our turn to return what mankind gives us.

In the current world about 40 million people suffered from blindness and about 140 million people are suffered from low vision and if we talk about India we are having the world’s largest number of people suffering from blindness. The objective of BIONIC EYE is the same as to restore visual signal to whom suffering from eye disease such as retinitis pigmentosa. In this a video camera is integrated with a pair of glasses which will capture and process images. The images are wirelessly sent to small processor which converts it into electronic signal and these signal further transmitted to a retinal implant or electrode which send visual signal to brain for further processing. So by this even blind people also have vision.

When a light ray reflected from an object an reaches to our eye then signals are sent to brain then brain decodes the signal in order to optimize the appearance, location and movements of the object we are seeing at. The whole process is performed due to light only, without light there is no world which means we are not able to see anything. 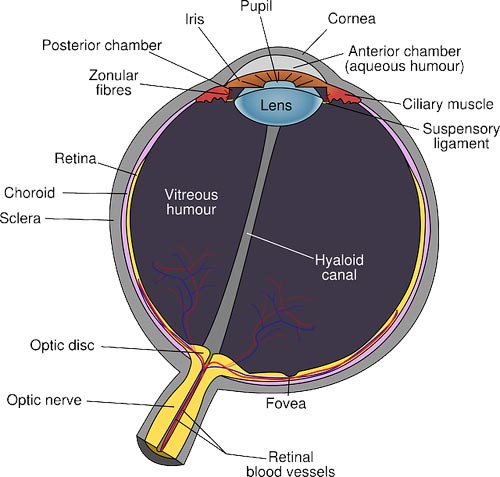 The main part of an eye is retina. The retina is an inside wall of eye which works as film of a camera to capture the light signals and transmit them to brain via optic nerves to create vision.

It’s an artificial eye which provide visual sensations to the brain. It consist of electronic systems having image sensors, microprocessors, receivers, radio transmitters and retinal chips. Technology provided by this help the blind people to get vision again.

It consist of a computer chip which is kept in the back of effected person eye and linked with a mini video camera built into glasses that they wear. Then an image captured by the camera are focused to the chip which converts it into electronic signal that brain can interpret. The images produced by Bionic eye were not be too much perfect but they could be clear enough to recognize. The implant bypasses the diseased cells in the retina and go through the remaining possible cells.

The device consists of 3,500 micro photodiodes which are set at the back part of the retina. The electrical signal which is sent to brain is obtained from these miniature solar cells array as they converts the normal light to electrical signal. 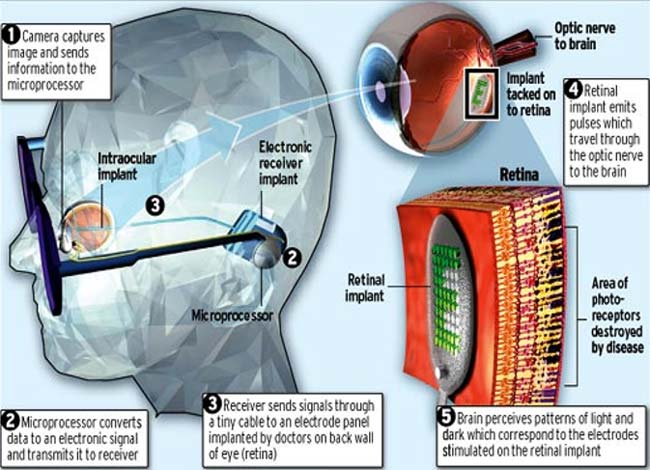 The Bionic Eye works similar to human eye as it gets images from the camera fitted with the glass that a blind person can wear, the camera is small in size as it fits onto the frame of glass or in future we can able set into the structure of the artificial eye. Then the image is further send to a small electronic chipset (microprocessor). The work of microprocessor is to convert that image data into the electronic signal and further transfer it to the receiver, it send signals through a very tiny cable to an electrode panel implanted by the doctors on the back wall of eye which is also called as retina. Electrode panel generate pulses which travel through the optic nerve to the brain, the optic nerve of a blind person is sometimes damaged then we use some devices which are capable of bypassing the signal from the possible ways, then only the signal is able to reach the brain. As the signal reaches the brain, brain start the decoding the signal and we are able to identify what the subject is, this process is too fast that we are able to see in similar to human eye.

The available bionic eye system developed by California based company named Second sight is Argus II Retinal Prosthesis System approved FDA in United States. Retinal Prosthesis is a biomedical implant used to partially restore the useful vision for those who have lost their sight due to this disease. According to a survey in every 5,000 people there is one suffered from that disease. It used to provide pulse signal to the brain by using the retinal implant for the blinded person. As it is having a mini video camera to get the data which is wirelessly transferred to a video processing unit which converts the data into electronic signal and then the signals transferred to electrodes which generate impulse to interpret with the brain and a blind person is able to see like an normal human, but the vision is not 100% perfect. 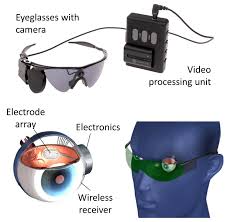 In the future we are able to increase higher numbers of electrodes that are capable of producing sharper, colored and more functional vision for people who are blind from retinitis pigmentosa and other retinal diseases, including macular degeneration.

Scientists are are testing devices with even more electrodes so that it can bypass the retina and move the signals to the brain directly. The next generation of Argus II retinal stimulator is going to design with 60 controllable electrodes which provide subjects beamed with higher resolution images.

How It Looks Like to See Through a Bionic Eye

i like to be in development of this incredible world but problem is who is going to funds my project.