A Beginners Guide for Getting Started with 3D Printing

3D printing, Additive printing or Stereo lithography, if you have come across these terms and just blinked over it then you probably might want to read through this article to know about this amazing world of 3D printing. 3D printing is a quickly expanding field, with the popularity and uses for 3D printers growing every day.  In this article, we will attempt to give a newbie's introduction to 3D printers, how one could get benefited from it and how it is going to change things in future.

So!! What is 3D printing and how does it work?

3D printing or additive manufacturing is a process of making three dimensional solid objects from a digital file. It uses a printer like machine which melts a material (commonly plastic) and pours it on a base in a predefined manner thus creating successive layers to make it 3 dimensional.  To put it simple the printer builds a loaf of bread slice by slice.

There are many types of 3D printing technologies available but the most used is Stereolithography (SLA) because it is more affordable compared to others.

This machine is capable of converting any 3D designed file into a 3D object by the following steps.

Is 3D printing new to the market?

No, defiantly not!!!!. Just because 3D printings have got more attention these days, it does not this Idea or technology is new. You would be surprised to know that it all started at the end of 1980 where the term additive manufacturing was coined, it was basically used for Rapid prototyping. But later around 2014 with the rise of low-cost 3D printers, the technology has turned into a disruptive movement for hobbyists, learners, technopreneurs, inventors, teachers, research peoples and whom not. Thus it is getting a wide market and great scope for future.

3D printers where originally made to help astronauts. It was hard for the team to pack up every tools and materials that they would need in the space to work on their project. Having surplus tools will increase the weight of the shuttle which eventually increases fuel consumption. So they came up with this idea where the 3D printer will be sent to space along with the astronauts, when they need any tools or materials to work with, they simply have to click through the STL file and print it. If any emergency and new design is to be made, the design will be made in base station and sent to the crew to print it. But as technology advanced things changed, now it is affordable for every home to have a printer.

"But now many people make mistake of looking at 3D printing just as another method of making objects, which just allows for greater shape flexibility at the cost of speed and accuracy. But that is a narrow point of view to look at 3D printing. In concept 3D printing is more like digital, discrete and free form manufacturing. With basic assumption that once you are able to "slice" and object of desire and arrange the small bits on layers after layers, the application and implications become infinite. Consumer goods, plastics, electronics, food and even human tissues anything that is complex for current method of mass productions (complex enough to create single unit cost effectively) is now a possibility" says Onkar Kulkarni in one of his quora answers. 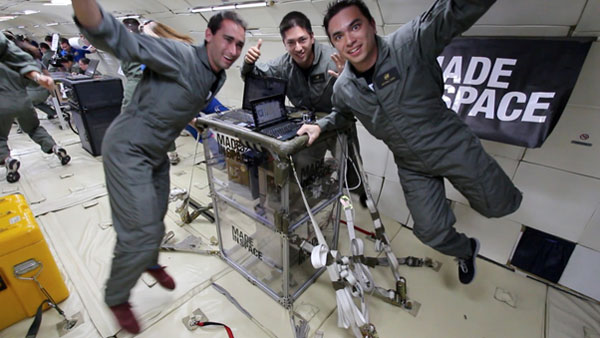 How can one get started with 3D printers?

Since the recent technology has reduced the price of 3D printers low enough for an average person to buy and use it, 3D printing is no more a magic or Industrial Level equipment. Thanks to the online forums and Designs now anyone who can operate a computer can print his imagination. Just like how laser printers have become common in our house these 3D printers are yet to find their way into our house or workplace. So let us see how one can get started with 3D printing, for any print to take place the following are the four simple steps to be followed:

2. Slicing and other settings.

Yes, in order to print something with your printer you have to design them modelling software.

If you are a professional designer you can use any of your modelling software that has the ability to save a file in .STL(Stereolithography)  or .OBJ(object). Once the design is created is can be taken to the slicing stage. Here you are free to alter, edit or tweak your desing the way you like since the complete design is made by you.

If you are a Learner, then there are tons of free open source software available which can be used the design in your mind. It would just be like placing building block. If your design is too good you will also paid by some online communities.

If you are a newbie, and has no idea how to design a 3D model Worry not!.. There are lots of websites which provide free STL files. These files are tested and printed by persons who designed it hence it is reliable and will be easy to print. The only limitation to these files is that they come in .STL formats (Mostly). This format cannot be customized the way we like but even then it can be resized with the help of slicing software. If you are an absolute beginner then we would recommend you by starting with some designs available in the market.

Once the design is made the work of 3D modelling software is over. The files are now sent to Slicing software where it gets ready for the printer to print it.

SLICING AND OTHER SETTINGS:

The models that are designed have to be converted into a series of code called the G-Code for the printer to recognize it and start printing. This part is called Slicing. The quality of the print depends on the settings that are made here. Before we jump into this lets us get familiar of how simple a 3D printer really is!!!!

3D printing is not magic!

If you are still confused or amazed on how 3D printer actually works, trust me it is not a rocket science. There are lot of students who have tried building a 3D printer for themselves successfully.  In the next few paragraphs I will explain the parts of a basic 3D printer that will help you understand the Printers much better.

The typical parts of a 3D printer are shown in the picture below. 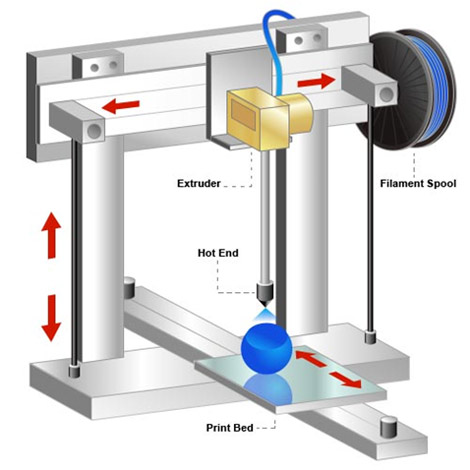 There many types of filament and a lot more come into the market every month. Each filament has its diameter and printing temperature, the most used one PLA which has temperature of 180-210 deg C.

This complete extruder set up is mounted over a movable rails. As the filament melts and comes out the extruder gets moved by other stepper motors (in the direction of the red arrows) present in the required direction and prints on the Base Plate.

Now, that we have some basic Idea of how our Printer works, let us get back to our SLICING software. The most used software is Cura this software was mainly created for the printer called Ultimaker. But since it was made free and open source most of the printers out there have started using Cura.

In this software the print settings are sent just like we do for our laser printer. Here we can Scale, align, and orient our print model. Other crucial settings like the temperature, retraction speed, flow of the filament nozzle diameter etc are fed to the printer using this Software.

Based on the settings the Print time and material length required for the print will be displayed by the software itself, as shown in the picture below. Here the print time is 1 hour 14 minutes and the material used will 10 gram. The other settings for this print can also be found in the picture 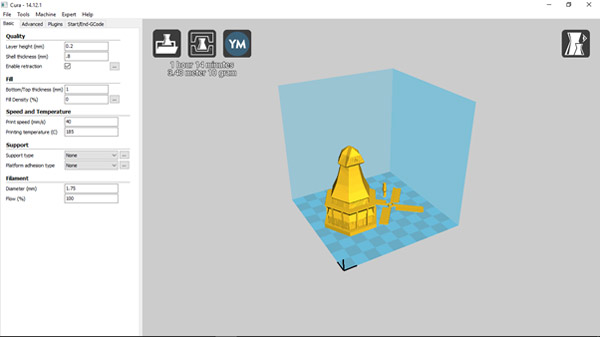 Once the STL file is loaded and settings are done, this software can be used to visualize how our print will be made using the layers option, as shown in the picture below.  This how or print will look like when it printing the 78th layer of this print. The blue color line indicates the path of our extruder.

Once this is done the file can be converted into a G-Code which can be fed to the printer for printing. That is it, you model will be printed in the time mentioned. 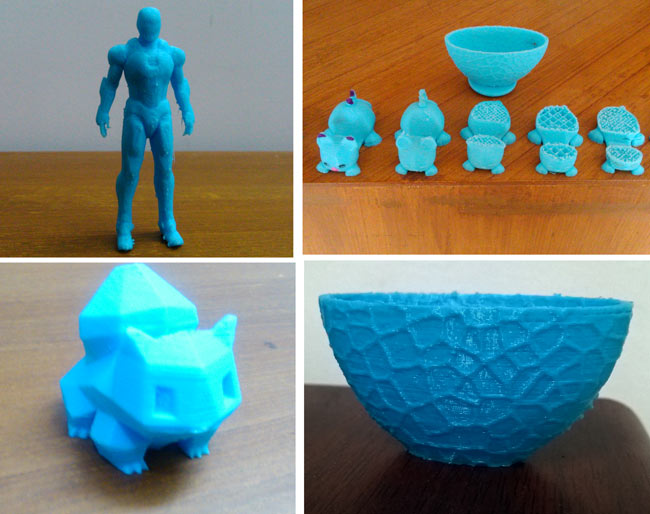 Was it that hard?

What is the future for 3D printing?

3D printing however does have its own set of challenges. It suffers from slow operating speed, mechanical defects in products and limited material choices (mostly Plastic). Due to slow operating speed of 3D printers, manufacturing companies might lose out to competitions with inefficient go to market strategy. But hopefully this field is evolving as you are reading this article, and has a great scope ahead. It all depends on how one decides to use this technology.

I want to more about 3d printer in detail

What are the questions in your mind, list them here or in the Forum. We will be glad to help you out. Also which printer are you using?

A complete paragraph in this article is copied from an article I have written elsewhere / one of the answer I have written on quora. If you are copying atleast give proper credits. Following is the word to word copied part..

"But now many people make mistake of looking at 3D printing just as another method of making objects, which just allows for greater shape flexibility at the cost of speed and accuracy. But that is a narrow point of view to look at 3D printing. In concept 3D printing is more like digital, discrete and free form manufacturing. With basic assumption that once you are able to "slice" and object of desire and arrange the small bits on layers after layers, the application and implications become infinite. Consumer goods, plastics, electronics, food and even human tissues anything that is complex for current method of mass productions (complex enough to create single unit cost effectively) is now a possibility."

Regert for missing your credits!!

I am Aswinth the one who wrote this article. I regret my mistake for not giving you the credits. The article will be edited soon.

I am an active reader on Quora and I found your answer very much vivid for my article. Thanks for the answer..

Sir I am very much happy to hound your article A Beginners Guide for Getting Started with 3D Printing. I will definitely try it. Thanks for great article.