In modern world, we are connected with everyone, either by internet or by a telephone connection. In this huge network, when a phone call is made, or when we access some website, the data get transferred from one network to the other network. Even to access a simple webpage, many computers (servers) are accessed to provide you the desired data you are looking for. Whether you are inside a closed network or in a large network segment, Switching is the most important mechanism which exchanges the information between different networks or different computer(s). Switching is the way which directs data or any digital information towards your network till the end point.

Suppose you are searching any type of circuit related information on the internet or looking for a hobby project in electronics, or if you open circuitdigest.com to find a specific article about electronics, there are lots of data movement happens behind your computer network. These movements are directed by the network switches which are using various switching techniques in various network junctions.

Circuit switching is a switching method where an end-to-end path is created between two stations within a network before starting the data transfer.

Circuit switching method has a fixed data rate and both the subscribers need to operate at this fixed rate.  Circuit switching is the simplest method of data communication where dedicated physical connections are established between two individual senders and receiver. To create these dedicated connections, a set of switches are connected by physical links.

In the below image, three computers on the left side are connected with three desktops PCs on the right side with physical links, depending on the four circuit switchers. If the circuit switching is not used, they need to be connected with point-to-point connections, where many number of dedicated lines are required, which will not only increase the connection cost but also increase the complexity of the system. 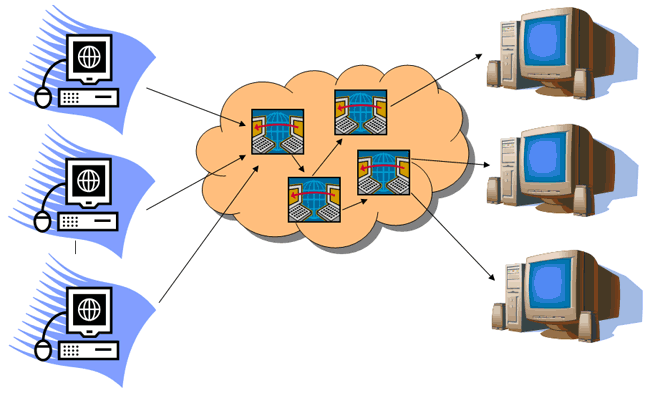 The routing decision, in the case of circuit switching, is made when the routing path is being established in the network. After the dedicated routing path is established the data continuously submitted to the receiver destination. The connection is maintained until the end of the conversation.

Data transfer only happens after the setup phase is completed and only when a physical, dedicated path is established. No addressing method is involved in this phase. The switches use time slot (TDM) or the occupied band (FDM) to route the data from the sender to the receiver. One thing needs to keep in mind that the data sending is continuous and there may be periods of silence in data transmitting. All internal connections are made in duplex form.

At the final Circuit disconnect phase, when any one of the subscriber in the network, sender or receiver needs to disconnect the path, a disconnect signal is sent to all involved switches to release the resource and break the connection. This phase also called as Teardown phase in circuit switching method.

A Circuit switch creates a temporary connection between an input link with an output link. There are various types of switches available with multiple inputs and output lines.

Other than the Advantages, Circuit switching also have some disadvantages.

Packet switching is a method of data transfer where the data is broken into small pieces of variable lengths and then transmitted to the network line. Broken pieces of data are called as packets. After receiving those broken data or packets, all are reassembled at the destination and thus making a complete file. Due to this method, the data gets transferred fast and in an efficient manner. In this method, no pre-setup or resource reservation is required like circuit switching method.

This method use Store and Forward techniques. So each hop will store the packet first and then forward the packets to the next host destination. Each packet contains control information, source address and destination address. Due to this packets can use any route or paths in an existing network.

VC based package switching is a mode of packet switching where a logical path or virtual circuit connection is done between sender and receiver. VC stands for Virtual Circuit. In this mode of packet switching operation, a predefined route is created and all packets will follow the predefined paths. All routers or switches which are involved in the logical connection are provided a unique Virtual Circuit ID to uniquely identify the virtual connections. It also has the same three-phase protocol used in circuit switching, Setup Phase, Data Transfer Phase and Tear down Phase.

In the above image, 4 PCs are connected with a 4 switch network and the data flow will be packet switching in Virtual circuit mode. As we can see switches are connected with each other and share the communications path with each other. Now in the virtual circuit, a predefined route needs to be established. If we want to transfer data from PC1 to the PC 4 the path will be directed from the SW1 to SW2 to SW3 and then finally at PC4. This route is predefined and All SW1, SW2, SW3 are provided with a unique ID to identify the data paths, so the data is bound by the paths and could not choose another route.

Datagram switching is completely different from VC based packet switching technology. In Datagram switching, the path is dependent on the data. The Packets have all the necessary information like Source address, destination address and Port identity etc. So in connectionless datagram-based packet switching mode, each packet is treated independently. They can choose different routes and the routing decisions are made dynamically when data are transmitting inside the network. So, at the destination, the packets can be received out of order or in any sequence, there is no predefined route and the guaranteed packet delivery is not possible. To secure guaranteed packet receiving, additional end system protocols need to be configured.

In this mode of packet switching, there is no setup, transmit and teardown phase is involved.

Again in the above image, 4 computers are connected and we transferring data from PC1 to PC4. The data contains two packets labeled as 1 and 2. As we can see, in Datagram mode, packet 1 chose to follow the SW1- SW4-SW3 path whereas Packet 2 chose the route path of SW1- SW5- SW3 and finally reached PC4. The packets can choose different path depending on the delay time and congestion on other paths in Datagram packet switching network.